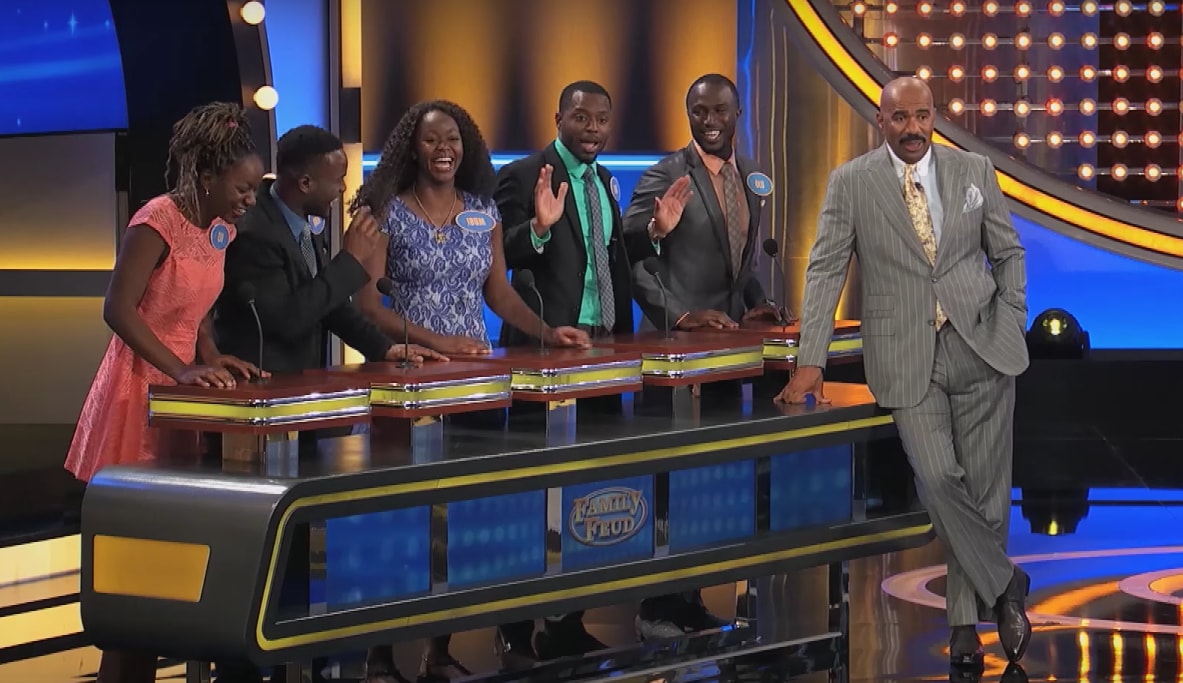 FAMILY FEUD, the widely popular international television game show, is coming to Ghana and is open for entries.

Award-winning entertainer, businessman and philanthropist STEVE HARVEY will host the iconic game show, in which two teams of family or friends compete to name the most popular responses to gathered survey questions in order to win cash and prizes.

“Bringing Family Feud to Africa has long been a dream of mine,” said Steve Harvey. “I believe Family Feud will become a household name for local families. And this is just the beginning in Africa. I expect this show to lead to multiple media and business projects in and throughout the continent.”

When Steve Harvey visited the continent earlier this year his first stop was Ghana. He said it was an eye-opener and an emotional experience he will forever hold dear. “It was powerful beyond words,” he said of his tour of some of the tourist sites, including the historic slave castles and dungeons in recognition of the government of Ghana’s “Year of Return, Ghana 2019”, which marks the 400th anniversary of the start of the slave trade in West Africa.

The application entry process for Family Feud is already open and will close at 23:59 SAST on 13 November 2019. All applications received after the closing date will not be considered. Applications cannot be returned.

Filming will commence in January and begin airing in April 2020 on TV3. This fun-filled family show will be produced by the multi-award winning production company, Rapid Blue, who are the leading entertainment producers across the African continent, boasting smash hits such as Idols (Nigeria), X-Factor (South Africa and Nigeria) and most recently, the record-breaking East Africa’s Got Talent (Kenya, Rwanda, Tanzania and Uganda) amongst many others.

Executive Producer Kee-Leen Irvine said, “As Rapid Blue, we are totally thrilled to be bringing this light-hearted and comedic entertainment to local audiences, especially hosted by someone of Steve Harvey’s stature and passion for our continent. We are equally honoured to be working with TV3. We have an exciting challenge ahead of us to find teams who are confident, bubbly, funny and entertaining. It is not about general knowledge but rather about the ability to predict the most common responses to survey questions about the warm and fascinating culture, thoughts and behaviour of fellow Ghanaians, which is the foundation for a whole lot of fun and laughs. There are fabulous prizes to be won and no-one walks away empty-handed.”

Teams must consist of four members who are either family, co-workers or great friends!

To enter, all you have to do is go to familyfeudafrica.com and click apply!

In order to be considered to take part in Family Feud, you must meet the following requirements:
• You must complete all the application forms as honestly as you can
• You must provide a short video clip of your team
• You must be 18 years of age or older on 13 November 2019
• All members on the team must have a valid passport
• You must be living in Ghana or South Africa as a legal resident; and
• You must not have been convicted of any offence, or be subject to any court order, relating to assault, violence, sexual misconduct or harassment.
Shortlisted applicants will be contacted for a face to face audition in Accra. The series will be shot from 6 to 17 January 2020 in South Africa. All travel costs will be paid for by the production.

Steve Harvey formed Steve Harvey Global (SHG) in 2017, to consolidate and expand his vast business and media interests. Steve Harvey Global is focused on creating and delivering entertaining, powerful and motivational content, products and experiences to inspire audiences around the world.

Related Topics:Family Feud Ghana
Up Next

Documentary on Nigeria’s most fatal pipeline explosion, premieres this week at AFRIFF