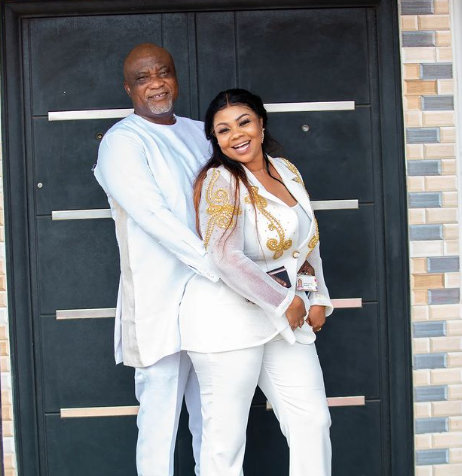 Popular Ghanaian gospel singer, Gifty Adorye, popularly known as  Empress Gifty has revealed how some of her friends contributed to the collapse of her marriage with ex-husband, Prophet Prince Elisha Osei.

In a recent interview with Emelia Brobbey on her Okukuseku Talk show, Empress stated that her experience with friends in the past has made her very attentive to the people she choses to hand around with.

“I choose my friends now. The way I engage the people I call friends now is different. I tell them what I want them to hear and let them see what I want them to see. If you don’t come to my house, I will not ask you to. Because I chose some people as friends and family in the past did not help me,” she painfully stated.
Speaking on how these friends influenced the collapse of her marriage which was highly publicised, she narrated how these same friends would pay bloggers to write bad about her and later call to console her.
Empress Gifty, who is now in what she calls a peaceful home, revealed that the “evil plans” of her friends, led her to her new husband, Hopeson Adorye.

“I prayed to God to allow my accusers to taste what I experienced when my marriage collapsed. Now, they have regretted their evil plans because what they did pushed me to Mr Adorye. Sometimes our troubles come in disguise; they come in pain, and when you are able to withstand it, what follows is joy.

“I am grateful to God for the spirit of boldness and a mother who had my back, if not, I might have run from one radio station to another out of depression…my mother encouraged me. She said that a respectable man somewhere might be looking for a lady like me as a wife. She added that my time will come reason why I shouldn’t pay attention to those who mocked me,” she stated.

I treat my girls well, I don’t know why they leave me- Shatta Wale opens up on failed relationships

The woman who led the “Me nsa aka ooo” TV commercial 13 years ago to promote MTN’s Mobile Money (MoMo) has been gifted a 2-bedroom house. END_OF_DOCUMENT_TOKEN_TO_BE_REPLACED

It’s difficult to predict where Stonebwoy will be in the coming days, weeks, months, or years. As a musician with a keen interest in pushing his sound to the world and etching his name in the minds of new fans, 2022 has been described as his busiest music year thus far since gaining mainstream recognition in 2012 with Pull Up—seven years after he made his official debut—the musician confirmed this via social media after his last summer show. END_OF_DOCUMENT_TOKEN_TO_BE_REPLACED

Ghanaian actress, Nana Ama McBrown has revealed that there’s absolutely no bad blood between her and her ex boyfriend, rapper, Okyeame Kwame. END_OF_DOCUMENT_TOKEN_TO_BE_REPLACED

Veteran Ghanaian actor, Kofi Adjorlolo has denied claims that he was set to marry the mother of popular Dancehall act, Shatta Wale. END_OF_DOCUMENT_TOKEN_TO_BE_REPLACED