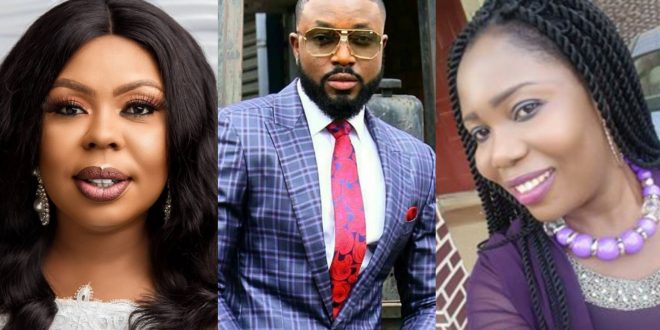 Last week, self-acclaimed queen of comedy and controversial TV personality, Afia Schwarzenegger alleged that Elikem Kumordzie was sleeping with former Member of Parliament for Gomoa Central Constituency, Rachel Appoh.
There has been a lot back and forth since the allegation proving that the scandal is not dying out soon.

According to Afia, the former MP revealed to her that, Elikem Kumordzie whom she was romantically involved with, scams wealthy women, spends their money and discards them.
When the story broke, the former came out to rubbish the allegations leveled against her explaining that Elikem’s sugar mummy felt threatened and paid Afia Schwarzenegger $500 to lie and betray their seven years old relationship.

Indirectly responding to the allegations, Elikem took to IG and stated that he only responds to quality people. Advising his followers to ”Develop the Habit of “OQP”. ONLY QUALITY PEOPLE…. life is valuable, life is too short indirectly jabbing Afia.

However, someone who is not following Elikem’s way of handling the drama is the alleged sugar mummy of Elikem, Queen Deee who has made some shocking revelation about Rachel Appoh.

Taking to her Instagram, the SA businesswoman wrote: “You have backed like the dog you are and I have kept silent. Now trust me every audio is about to go out. Every screenshot going out. And even your witch doctor has turned against you and I all with me. I will be posting everything one by one
You told me if I ever come to Ghana I will die. You are a disgraced fired Former MP. You said you were Ghanian and you would use all your Ghana power to ruin me. Now your Ghana power has turned against you. The whole world will hear about you Rachael nana Appoh”

As if that was not enough, Afia Schwarzenegger took to social media to share WhatsApp chats between herself and former NDC MP for Gomoa Central as well as audio with the voice of former MP confessing some private issues.

Rachel Appoh is yet to respond to these new claims by Afia and Queen Dee which I hope she doesn’t. Who do you believe though?

What a time to be an African! On the back of a successful Global Citizen Festival in Accra, and a visit of  Recording Academy CEO, Harvey Mason Jr to Ghana, his first trip to West Africa, it appears that Afrobeats may soon get its individual shine at the Grammys! END_OF_DOCUMENT_TOKEN_TO_BE_REPLACED

The School of Graduate Studies of the University of Professional Studies (UPSA) has honoured Ghanaian musician, Rebecca Acheampong known popularly as Becca for her outstanding academic achievements. END_OF_DOCUMENT_TOKEN_TO_BE_REPLACED

Platinum selling artist, KiDi has reacted to the resurfacing of his old tweets on the social media platform. END_OF_DOCUMENT_TOKEN_TO_BE_REPLACED