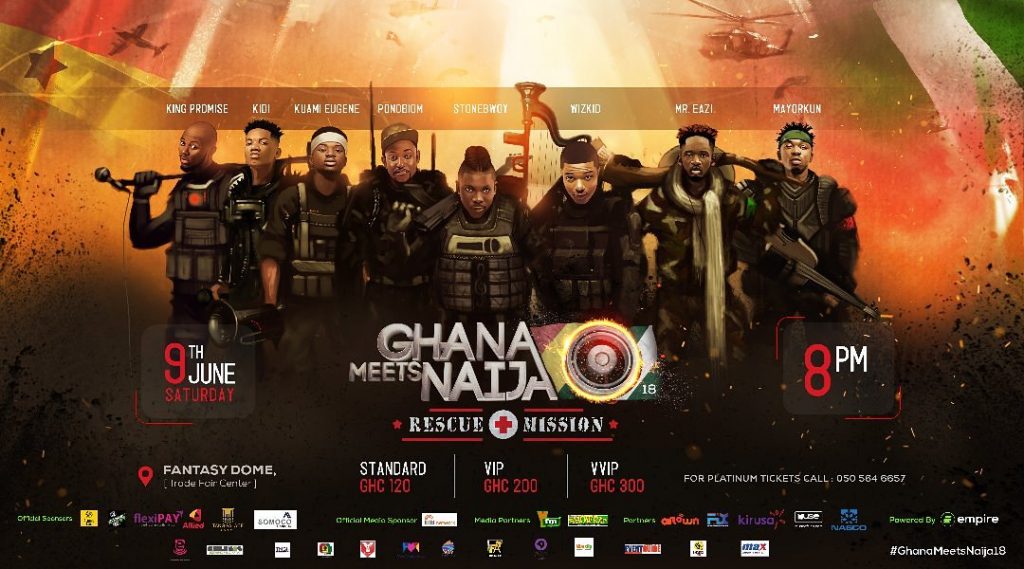 The call for a bigger event for the annual Ghana Meets Naija concert has been heeded to by the organisers, Empire Ghana, as this year’s concert makes its debut at the facility located at the International Trade Fair, La. Fantasy Dome boasts state-of-the-art facilities and has already hosted a number of high-profile events.

Over 5000 people are expected to attend the event, which has constantly proven a sought-after platform for the West African nations to play out the musical sibling rivalry that exists between them. It is therefore no wonder that, soon after the launch, rapper Yaa Pono, who is billed to represent the Ghana side of matters, has started the ceremonial “big talk”.
Dubbed the “Rescue Mission”, this year’s event will also witness  performances from Stonebwoy, who is famed for his outstanding live gigs, KiDi, Kuami Eugene, King Promise, Patapaa, and Fancy Gadam. Nigeria will be represented by Wizkid, Mayorkun, and Mr. Eazi. More acts are expected to join the roster soon.
Usually overbooked, the concert, widely deemed the biggest West African show, has previously been mounted by A- Listers as Shatta Wale, Sarkodie, Falz, Tiwa Savage, Davido, Naeto C, R2Bees and a host of others.
Patrons can buy tickets at LIVE FM and Starr FM on the Ring Road and also via the Flexipay App.
Tickets sell at Ghs 120, Ghs 200, and Ghs 300 respectively. Platinum tickets/ table can be reserved on 050 564 6657.
This year’s sponsors include Kasapreko Alomo Gold and Storm Energy Drink, Allied Oil, Somoco Ghana Ltd, Nasco Mobile, Kirusa, Point and Play, Rova Surveillance, Tang Palace, Fix Consult, EIB Network (Starr FM, Live FM, Gh One TV, Kasapa FM, Empire FM, Ultimate FM, Abusua FM), Graphic Showbiz,  Y FM, Aftown Music, Muse Africa, Ghana Music.com, West Hills Mall, Achimota Retail Centre, Accra Mall, Timepiece Gh.
The 2018 Ghana Meets Naija concert is powered by Empire Ghana.
]]>
Related Topics:Ghana Meets Naija
Up Next

Ghanaian Reggae and Dancehall artist, Stonebwoy has been captured in a studio with American singer, Jordin Sparks following their recent meeting in Los Angeles. END_OF_DOCUMENT_TOKEN_TO_BE_REPLACED

A Lagos State High Court, Southwest Nigeria has awarded N5m damages against a singer, Ikuforijimi Abdulrahman, aka Oxlade, over a leaked explicit sex tape with a woman on a social media app, Snapchat. END_OF_DOCUMENT_TOKEN_TO_BE_REPLACED

Ghanaian rapper, Kwaw Kese has recounted his contribution to the success of Stonebwoy’s career. END_OF_DOCUMENT_TOKEN_TO_BE_REPLACED

Ghanaian Afropop and R&b singer, Camidoh has stated that he dropped an EP instead of an album to further solidify his brand some more. END_OF_DOCUMENT_TOKEN_TO_BE_REPLACED

Ghanaian Radio/Television Personality, Deloris Frimpong Manso, popularly known as Delay, has revealed that she has been blocked on Twitter by her colleague Abeiku Santaana. END_OF_DOCUMENT_TOKEN_TO_BE_REPLACED