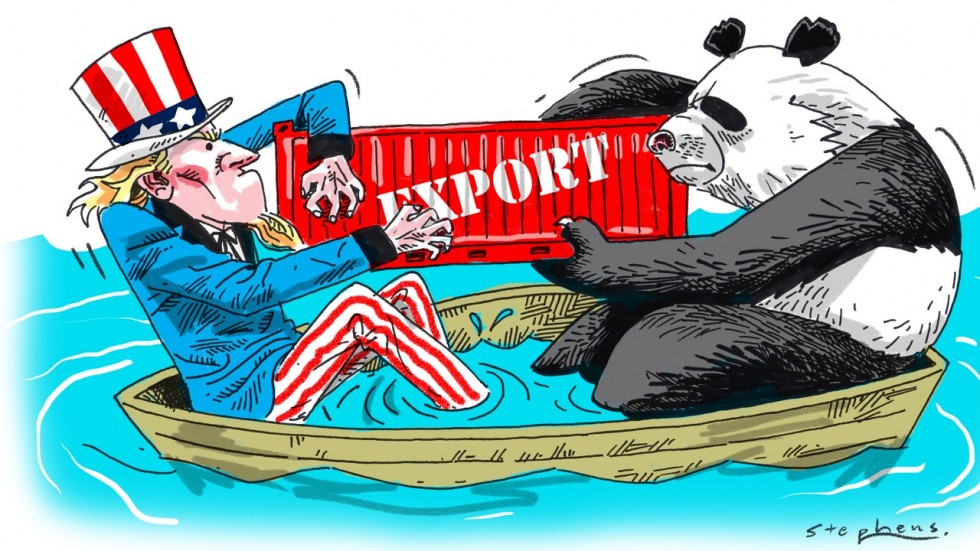 The trade war between the US and China seems to be escalating by the day and analysts from both ends are skeptical about who would blink first. Some believe China will be first, despite the fact that the United States imports more from China than China does from the US. In 2017, the total value of U.S. trade in goods with China alone amounted to 636 billion U.S. dollars; composed of a 130.4 billion U.S. dollar export value and a 505.6 billion U.S. dollar import value. However, the decline of he yuan since April has been its weakest since May 2017. Could it be the Trump Effect? There’s some truth to the fact that the United States greatly contributed to the fast economic growth of the Xi Jinping led economy for the last 2 decades. With global American brands such as Apple Inc., which recently became valued at over a Trillion dollars, moving all of its manufacturing jobs away from the U.S, China has indeed benefited greatly. But as China is speeding up its path to global domination could the US be a little scared of the country its helped to get to where it is? The U.S could also feel the heat of the Trade war but certainly not as much as China will. Taking a look at Industrialisation for example, the main reasons why China is a more preferred destination is because of its cheap labour, skilled workforce and political stability. At a Fortune Global Forum in Guangzhou, Apple CEO Tim Cook, confirmed that the main reason why Apple manufactured in China was because of its highly skilled workers and not just its cheap labour force. But what if China could easily be replaced by a continent which has gained pretty much the same advantages quite recently? What if the US.and the world set its sights on that continent? A New China perhaps. China’s China Africa is fast becoming the New China. So far more than 40 African countries have signed a continental Trade deal under which they committed to cut tariffs on up to 90 percent of goods to improve intra-African trade and boost growth. With lower barriers to trade it will be far easier for African nations to develop regional supply chains and export more finished goods instead of raw materials. The UN recently stated that the continent had 200 million people aged between 15 and 24 , making it the youngest population in world. Further questioning if it was a ‘ticking time bomb’ or an ‘opportunity’. It is no surprise that Africa has such a cheap labour force. The continent has also seen a significant progress in its political stability within the last few decades with countries such as Ghana, Botswana and Mauritius leading the way. African Presidents are also gearing up for this phase of its growth. Presidents such as Nana Akufo Addo of Ghana with initiatives such as the ‘One District, One factory’ and Paul Kagame of Rwanda who recently opened a Volkswagen Car Manufacturing plant have made it a key part of their administration’s plans to boost industrialization in their respective countries. In terms of skilled labour, African Universities are churning out more and more graduates who are skilled in several areas including STEM (Science, Technology Engineering and Math). Google recently announced that it would open its first AI center in Ghana, explaining that it had to with the robust network of academic institutions in the country. In the fall of 2017 the Chan-Zuckerberg initiative, owned by Facebook CEO Mark Zuckerberg invested 40 million dollars in Andela, a startup aiming to train thousands of Africans to become Software engineers for free. With the abundant African sunlight, Morocco is turning the Sahara desert into a solar energy oasis, generating enough energy to satisfy its economy and export to other countries. Even though there are a few things that will be needed to fully complete Africa’s Industrialisation path, it is well on its way there. Africa has always been blessed with abundant natural resources, a large portion of which has always been exported to China for manufacturing. Will Africa be able to take control of its industrialization or will China, which is increasingly investing more into the African continent and recently doubled its investment spend in 2017, seize control? What will this mean for Africa? Becoming an industrialisation hub for the world like China is now, will propel Africa to unimaginable economic heights and could do alot to eliminating extreme poverty on the continent. The African Union like the European Union could be placed in a position to make fairer and better trade deals for the continent than it has in the past. In the end the US-China trade war could be the best thing that ever happened to Africa. The dark continent will be the continent of the future. By Emmanuel Osei Asamoah Reference Image https://pixabay.com/en/african-lion-wildcat-mane-closeup-2888519/ Paragraph 1 In 2017, the total value of U.S. trade in goods with China alone amounted to 636 billion U.S. dollars; composed of a 130.4 billion U.S. dollar export value and a 505.6 billion U.S. dollar import value. (https://www.statista.com/statistics/277679/total-value-of-us-trade-in-goods-with-china-since-200 6/)]]>