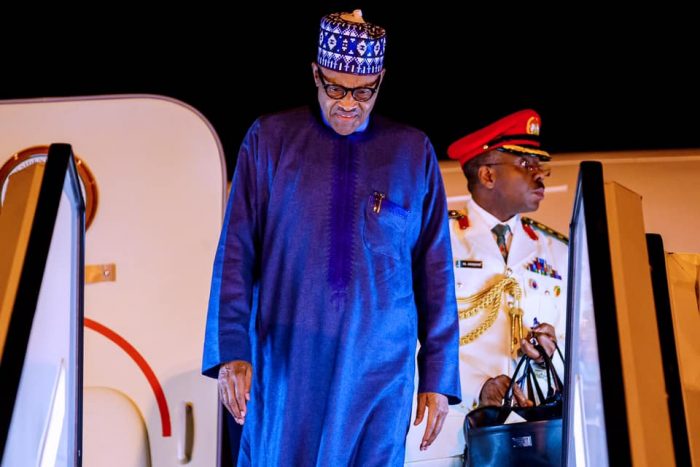 In the past few days, Nigerian social media has been awash with stories about President Muhammadu Buhari’s medical trip to London. Agitations continue to get rife daily as people call on the 78-year-old leader to return home and fix his country’s poor health system instead of seeking medical attention overseas.

Buhari flew to London on 30th March for a “medical check-up” and is billed to return home in the second week in April. Since he came to power in 2015, the retired general has flown to the British capital several times and spent more than 175 days seeking health care. In 2017, he spent over 150 days receiving medical care in the U.K. after temporarily handed over power to his vice Yemi Osinbajo.

This regular occurrence has been the reason for many Nigerian’s outcries, especially as his state of health has become a sensitive topic in the country. Of course, it is hard to blame Nigerians for venting their frustrations, given the 2010 experience when one of their former presidents, Umar Musa Yar’Adua, died while on medical attention in Saudi Arabia.

Yar’Adua’s state of health was shrouded in secrecy, leaving Nigerians in doubt of his capability to lead the most populated country in Africa. His absence, health, and eventual death almost created a leadership vacuum in the country, as he didn’t hand over power to his then-vice president, Goodluck Jonathan, who later became president and ruled the country for five years.

Interestingly, this insatiable appetite for foreign medical care isn’t peculiar to Nigerian leaders. Health tourism has become a common trend among several African leaders. Many past and present presidents have shown that they prefer overseas to local health care. Presidents Ali Bongo of Gabon, Patrice Talon of Benin Republic, former presidents Abdelaziz Bouteflika of Algeria and Jose Eduardo Dos Santos of Angola are other African leaders known for this practice.

During his time as Zimbabwe’s president, Robert Mugabe was also a regular visitor to health facilities abroad, snubbing his country’s health system. The 95-year-old leader, who left power in 2017 after ruling the south African country for 37 years, later died in a Singaporean hospital in September 2019.

Many African leaders have neglected their country’s health system for years. And this explains the poor conditions of facilities across the continent. The year-long negligence has left the health sectors in many African countries in a sorry state. Many hospitals lack basic facilities such as beds and personal protective equipment (PPE).

For this reason, African leaders don’t have faith in the system they provide and oversee. This explains why they and their families fly abroad for even the most basic medical treatment. Apart from a very few countries, such as South Africa, which has been improving its health sector, it is hard to find the state of the art medical facilities in many African countries.

The continent loses a huge amount of money to this high rate of health tourism. For example, Nigerians spend $200 on health tourism every year to India alone, and their overall annual medical tourism spending is estimated to be $1 billion. In 2016, findings showed that Africans spent a whopping $6 billion seeking healthcare abroad. Medical tourism is a luxury that can only be enjoyed by few people.

Those suffering the greatest burden of this year-long negligence of Africa’s healthcare are its citizens, most of whom are low-income earners. They are left with no choice but to use the deplorable facilities at home while their leaders get the best care abroad.

Consequently, the effects of these disappointing practice include high child and maternal mortality rate, high cases of infectious diseases, and low life expectancy, which have become perennial challenges across the continent. According to a World Health Organization (WHO) report, malaria still accounts for hundreds of thousands of deaths in Africa, and most of these deaths are in children ages 5 and below.

A World Bank’s child mortality report shows that 1 in 13 sub-Saharan African children die before they reach the age of 5. Many African countries, especially the sub-Saharan African region, also have alarmingly high maternal mortality ratios. In Nigeria, for instance, the maternal mortality ratio is 814 per 100,000 live births. In most developed countries, the lifetime risk of a pregnant woman dying during the stage of pregnancy, childbirth, postpartum or abortion is 1 in 4,900, but in Nigeria, it is 1 in 22.

The continent is also home to countries with the lowest-ranked life expectancy. On the global ranking, Sierra Leone, Nigeria, Lesotho, Chad, and the Central African Republic occupy the bottom five, with 55.92, 55.75, 55.65, 55.17, and 54.36 life expectancy, respectively. The figures show a huge difference when compared with countries like Hong Kong, Japan, and Switzerland with an average of 85 years old.

Poor infrastructure is another problem in the system. In 2019, there were reports of bare-handed surgeries by physicians in Zimbabwe because of the nonavailability of gloves. At the outbreak of the COVID-19 pandemic in 2020, there were reports of ventilators shortage across various African health facilities, and this further revealed the year-long rot in the system. Somalia’s health sector had nine ventilators, and only three were available in the Central African Republic. And in Nigeria, with over 200 million population, there were only 100. Most African counties also lag far behind in the WHO’s recommended hospital bed per population ratio.

The system also experiences a shortage of medical professionals. According to the WHO, the ideal doctor per population ratio is 1:1000, but in Africa, the current reality shows 1:10,000. This shortage is projected to reach 4.3 million by 2035. On top of that, many of the few available professionals migrate daily to Europe, the Americas, and Asia in search of greener pasture, as the condition at home is anything but favourable to healthcare workers.

For example, in the U.K. medical care sector, 1 in 10 physicians are from Africa. Many of them have settled in the European country for years and have been granted indefinite leave to remain – an indication that Africa has permanently lost those talents to another country that value them more. Other countries like the USA, Australia, and Canada also have several African trained professionals in their health sectors. These nations with some of the best medical system in the world gain yearly from Africa’s investments in doctors. Unfortunately, their gain is Africa’s loss. Findings show that it costs African countries an average of $21,000 to $59,000 to train a doctor. So, putting together these figures, Africa loses billions of dollars to those countries where its doctors migrate to in droves. And the more this continues, the more the continent will keep suffering a shortage of skills in its health system.

Just like other basic amenities, good healthcare has been an unaffordable and inaccessible luxury for most Africans. It is high time African leaders started getting their priorities right and improve their countries’ healthcare. They also need to stop galivanting across various overseas health facilities and use the same system their citizens use. There must be a significant improvement in the continent’s healthcare funding to bridge the gap that has left the system in critical condition. This will restore people’s faith in Africa’s healthcare and reduce the high volume of medical tourism.

Olusegun Akinfenwa is a political correspondent for Immigration News, a news organization affiliated with Immigration Advice Service London. IAS is a leading U.K. immigration law firm that helps people migrate and settle in the U.K.

Related Topics:African Leaders
Up Next