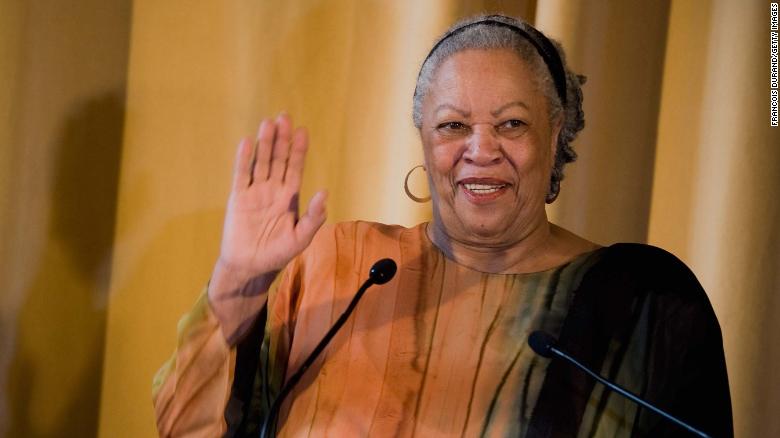 Toni Morrison, author of seminal works of literature on the black experience such as “Beloved,” “Song of Solomon” and “Sula” and the first African-American woman to win a Nobel Prize, has died, her publisher confirmed to CNN.

Morrison’s novels gazed unflinchingly on the lives of African Americans and told their stories with a singular lyricism, from the post-Civil War maelstrom of “Beloved” to the colonial setting of “A Mercy” to the modern yet classic dilemmas depicted in her 11th novel, “God Help the Child.”
Her talent for intertwining the stark realities of black life with hints of magical realism and breathtaking prose gained Morrison a loyal literary following. She was lauded for her ability to mount complex characters and build historically dense worlds distant in time yet eerily familiar to the modern reader with themes such as slavery, misogyny, colorism, and supernaturalism came to life in her hands.
A decorated novelist, editor, and educator — among other prestigious academic appointments, she was a professor emeritus at Princeton University — Morrison said writing was the state in which she found true freedom.
“I know how to write forever. I don’t think I could have happily stayed here in the world if I didn’t have a way of thinking about it, which is what writing is for me. It’s control. Nobody tells me what to do. It’s mine, it’s free, and it’s a way of thinking. It’s pure knowledge,” Morrison said
https://ameyawdebrah.com/south-africas-lerato-molapo-becomes-the-first-african-to-have-a-barbie-doll-in-her-honour/
Morrison penned roughly a dozen novels, most lauded among them 1987’s “Beloved,” about a former slave who kills her baby to ensure it is never enslaved. “Beloved” won the Pulitzer Prize for fiction and was a finalist for the National Book Award.
Her non-fiction work included 1974’s collection of African-American historical ephemera “The Black Book,” 1992’s “Playing in the Dark: Whiteness and the Literary Imagination” and 2004’s “Remember: The Journey to School Integration.”
In 1988, a group of 48 black writers and thinkers published a statement in The New York Times in support of Morrison and received the Pulitzer for “Beloved” two months later.
The novel was adapted into a 1998 film directed by Jonathan Demme and starring Oprah Winfrey, Danny Glover, and Thandie Newton. The movie was not a success.
The author and Nobel Prize in literature winner received the Honor Medal of The City of Paris (Grand Vermeil) at Mairie de Paris on November 4, 2010 in Paris, France.
Related Topics:Toni Morrison
Up Next

As earlier reported, on Wednesday (June 29), R. Kelly received 30 years in federal prison for sex trafficking and racketeering. Today (July 1), new details have been shared regarding the terms of his sentencing. According to reports, the “Ignition” singer must undergo sexual treatment if he is ever released. END_OF_DOCUMENT_TOKEN_TO_BE_REPLACED

US based British comedian/TV host, James Corden went to the White House as part of a segment for his tv show ‘The Late Late Show’ and posed as president Joe Biden’s personal assistant . END_OF_DOCUMENT_TOKEN_TO_BE_REPLACED

Taylor Swift is engaged to her British boyfriend Joe Alwyn, according to reports. END_OF_DOCUMENT_TOKEN_TO_BE_REPLACED

INTERPOL, in collaboration with the US Secret Service, South African Police and other agencies, has arrested an alleged Nigerian cybercrime kingpin, James Aliyu, in connection with $12m romance scam and business email compromise fraud. END_OF_DOCUMENT_TOKEN_TO_BE_REPLACED