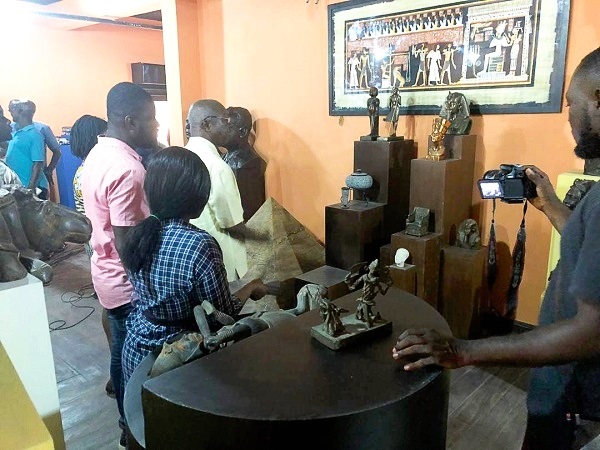 The Bisa Aberwa Museum, created by Mr Kwaw Ansah, one of Africa’s most respected award-winning filmmakers, founder and first Chief Executive Officer (CEO) of TV Africa Limited, is scheduled to be inaugurated at Notompo, Sekondi, in the Western Region this weekend.

Chairperson of the African Union (AU) Commission, Mr Moussa Faki Mahamat who is former Prime Minister of Chad and special guest for the occasion will be accompanied by his Ghanaian Deputy Chairperson, Mr Thomas Kwesi Quartey.

The inaugural ceremony itself will be performed by the First Lady of Ghana, Mrs Rebecca Naa Okaikor Akufo-Addo on Sunday, July 28. Ministers of State, Members of Parliament, the Diplomatic Corps, traditional rulers, heads of state institutions and the private sector have been invited.

The museum is created to be one of the largest sculptural representations in clay, wood, cement, paintings and photographs of personalities whose sacrifices have shaped African history, both within the continent and the diaspora.

It has about 2,200 artefacts, sculptural pieces and photographs of heroes of the African struggle and the African American Civil Rights Movement as well as other Black personalities in the French, Portuguese and Spanish Caribbean.

Speaking at a Media Preview at Nkotompo ahead of Sunday’s opening, Mr Kwaw Ansah, who chairs the museum’s 12-member Board of Trustees, said: “Africa has made contributions to world civilization and we ought to tell our story.”

About Africa’s history related to slavery and colonialism, Mr Ansah said “on display at Bisa Aberwa are artefacts that are a reminder of the struggle of the Black race, our culture and belief system.”

The inauguration of the museum comes at the right time as it will be one of the places people from diaspora visiting for the #YearOfReturn can go to learn more about their heritage.

The Hewale Lala (Song Of strength) hit maker Perez Musik gets ready to have his first-ever major concert. END_OF_DOCUMENT_TOKEN_TO_BE_REPLACED

Kofi Sonny, CEO of 610Music, a direct representative for Universal Music Group in Africa, unveiled two of his newly signed artistes to the world over the weekend. The event pulled in dignitaries from all over the globe to witness what many have dubbed “the birth of greatness.” END_OF_DOCUMENT_TOKEN_TO_BE_REPLACED

GuiltyBeatz is ringing in the summer! The Grammy-nominated Ghanaian producer and DJ is back with another dazzling solo effort – an Amapiano-infused dance anthem ‘Universe’ featuring Pop sensation, Mr Hudson and buzzing Ghanaian singer, Twitch 4EVA. END_OF_DOCUMENT_TOKEN_TO_BE_REPLACED

The host of Joy FM’s Strong and Sassy, Animwaa Anim-Addo, has tied the knot in a private ceremony. END_OF_DOCUMENT_TOKEN_TO_BE_REPLACED

Grammy award-winning Nigerian musician, Burna Boy is trending on Twitter over his choice of outfit at a recent concert. END_OF_DOCUMENT_TOKEN_TO_BE_REPLACED