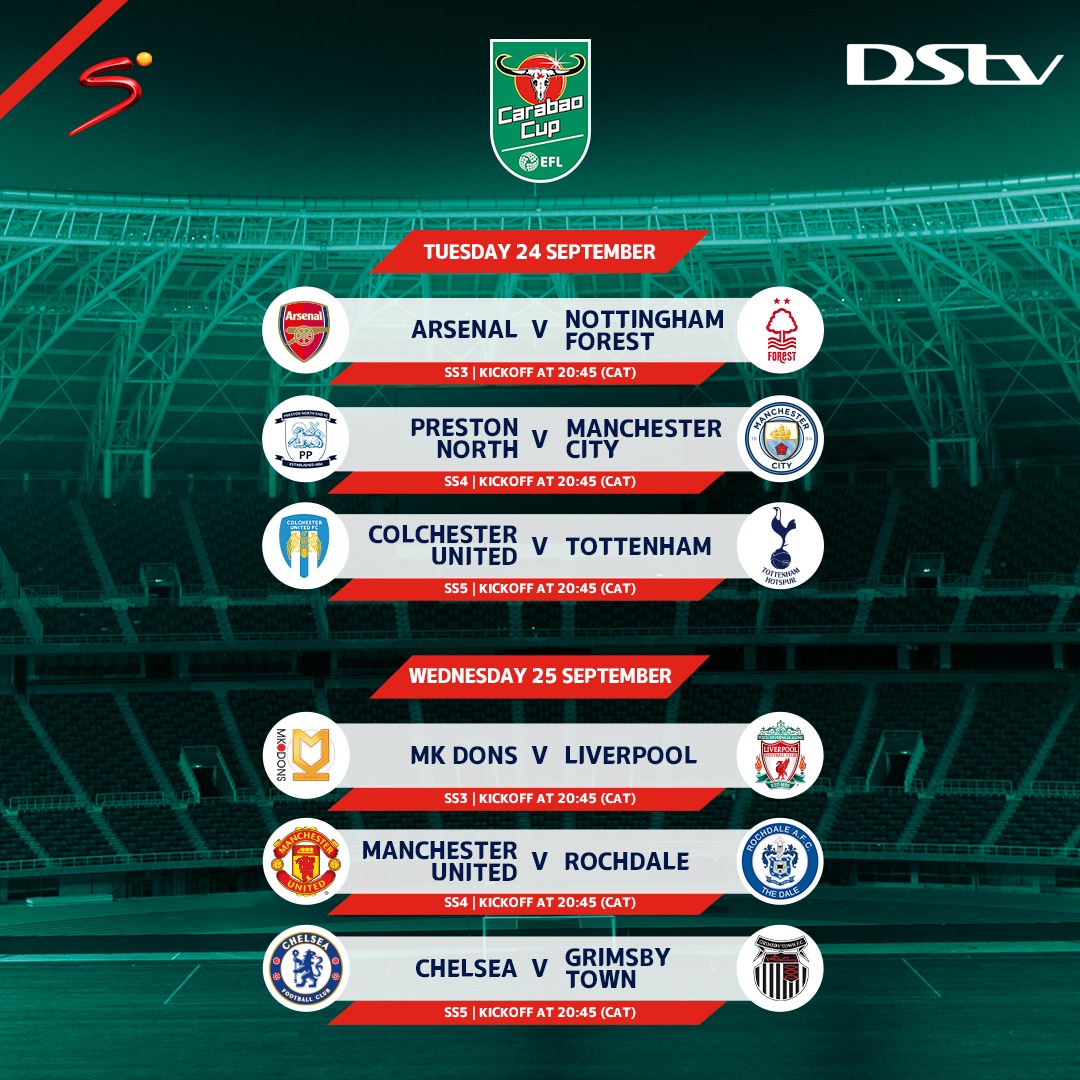 Viewers on DStv will be treated to some prime footballing action from the 2019/20 EFL League Cup  also known as the Carabao Cup for sponsorship reasons which will hold its Third Round on the midweek of 24-25 September 2019.

This phase of the competition sees the entry of England’s European club competition representatives for this season: Manchester City, Liverpool, Chelsea Tottenham Hotspur, Arsenal, Manchester United and Wolverhampton Wanderers (all of whose matches can be seen LIVEon SuperSport)

Here are the top five reasons to watch the Carabao Cup:

TheCarabao Cupgoes to an all-new level in the Third Round, with England’s European club competition representatives for this season Manchester City, Liverpool, Chelsea Tottenham Hotspur, Arsenal, Manchester United and Wolverhampton Wanderers making their entry after being given byes through the first two rounds.

With many Premier League clubs set to rest first-teamers due to the busy schedule in late September and early October, the chance of major upsets or ‘Giant Killings’ are realistic propositions. This includes defending Carabao Cupchampions Manchester City away to Championshipchallengers Preston North End at Deepdale,  Milton Keynes Dons hosting Liverpool and Grimsby Town away to Chelsea.

Nothing is better than a local derby for a cup clash and there are two standout fixtures for SuperSportviewers in this regard: the South Coast derby between Portsmouth and Southampton from Fratten Park on Tuesday 24 September, and Manchester United hosting League One side Rochdale AFC at Old Trafford on Wednesday 25 September.

The Third Round has thrown up some mouth-watering ‘old school’ clashes which were last seen in top-flight league football in the late 1990s and early 2000s, such as Arsenal at home to Nottingham Forest and Everton heading to Hillsborough to face Sheffield Wednesday.

The nature of the Carabao Cupmeans it’s very much do or die: any match which finishes level after 90 minutes (until the semifinal and final rounds) will go straight to extra time: no added 30 minutes, no replay the winner is decided on the night. This amps up the drama and forces teams to go all out in search of victory.

Don’t miss the 2019/2020 football season on DStv. Visit www.dstv.comto subscribe or upgrade, and join in on the excitement. And while you’re on the move, you can stream matches on DStv Now.

All matches kick-off at 6:45pm GMT

Related Topics:Carabao Cup
Up Next

In an immature society culture is an import; for a mature one it is a native manufacture which eventually becomes an export. – Northrop Frye. END_OF_DOCUMENT_TOKEN_TO_BE_REPLACED

This Week’s Episode Features a Conversation With K.O, the 5 Hottest Tracks of the Week, Africa Rising and Dadaboy Ehiz’s Favourite Track of the Week! END_OF_DOCUMENT_TOKEN_TO_BE_REPLACED