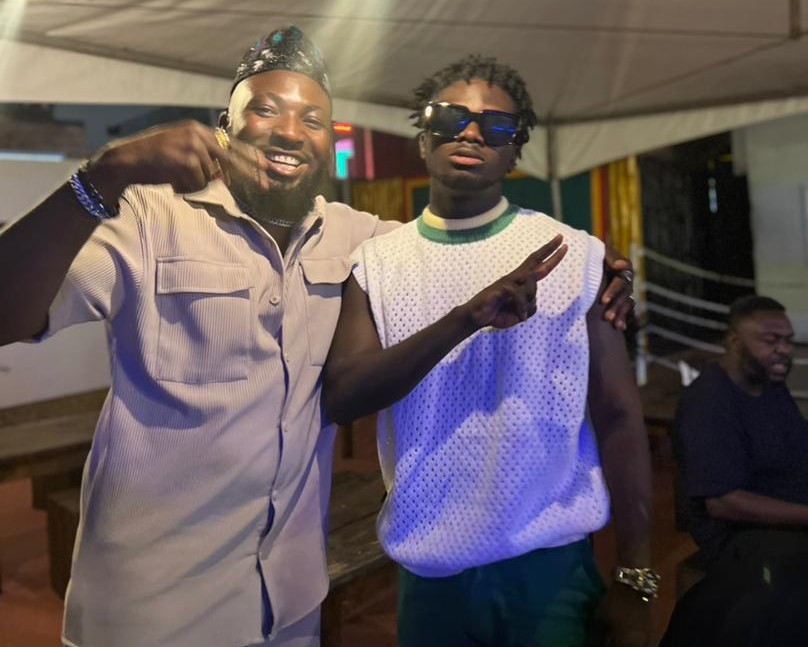 Flowar Bwoy appeared to have achieved a plus stride in his career as he was spotted with hitmaking Ghanaian singer Kuami Eugene.

Flowar Bwoy who was born Obed Yaw Danso Kwabi made a grand entry into music as Mayor The Boss Prophet in 2018. He is very good when it comes to performance with his bass guitar and the magic he performs with the guitar was what earned him the nickname bass prophet which eventually became part of his stage name back then.

In his first year as a professional musician, he released gospel music titled “Year Ma Me Anigye” with an accompanying video.

He released another single in 2019 with a classic video and named that track “Keep Ghana Clean”. He took his career to another height in 2020 despite the atrocities of the year by coming out with an album which was named “African Superman”. The album is currently available on all streaming platforms.

Flower Bwoy runs his record label which was established in 2020 and known as Red Eye and he sponsors his craft all alone. He has named his fan base the “Battalions”.

His current banger, “Sweet Diva” is currently the talk of time and it’s available on iTunes, audiomack, boom-play, and Spotify among other streaming platforms. The song is also currently topping 4Syte TV and Brye TV charts.

Passing through the Lynx @15 experience concert which was organized to climax the 15th- anniversary celebration of the record label, Flower Bwoy was spotted with Kuami Eugene. Kuami Eugene couldn’t hide his excitement as he sent shout-outs to the melodious Afrobeat artiste.

Related Topics:Flower Bwoy
Up Next

Today, Elton John and Britney Spears are thrilled to release the video for one of the biggest songs of 2022 and chart-topping smash hit “Hold Me Closer.” END_OF_DOCUMENT_TOKEN_TO_BE_REPLACED

Over the past few years, Asakaa also known as Ghanaian drill has quickly become one of the most talked about and popular genre’s out of the African music scene. The term Asakaa was coined by Ghanaian artist Sean Lifer to highlight the drill music coming out of Ghana’s second largest city, Kumasi. END_OF_DOCUMENT_TOKEN_TO_BE_REPLACED

After a 10-month plus major release hiatus, celebrated Ghanaian and African rap/hip hop artist, Sarkodie surprised his teeming fans a few days ago with the announcement of the release date and title of his 8th studio album, “Jamz”. Off the upcoming album is the release of the first single, “Labadi”. END_OF_DOCUMENT_TOKEN_TO_BE_REPLACED