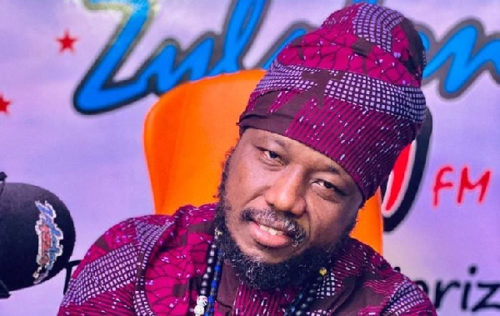 On-Air Personality and Reggae musician, Blakk Rasta has revealed he didn’t receive his GHC 10,000 salary from Zylofon FM for over 12 months due to the Menzgold Saga.

The host of “Taxi Drive Show” on Zylofon FM in a recent interview on Joy FM revealed that when Nana Appiah Mensah was setting up Zylofon FM and recruiting presenters for the station, he was one of the few people who were contacted.

Speaking in the interview, Blakk Rasta revealed that when he asked for GHC 10,000 salary, he was shocked that NAM 1 was ready to pay him the said amount.

Blakk Rasta however revealed that his days of receiving the hefty salary were shortlived after 4 months when the Menzgold scandal happened.

“It was an exciting (feeling) because I felt quite accomplished and I felt that I had to come back on the radio to do the magic. So, that’s how I met Nana Appiah Mensah. Fortunately, the salary came in the first, second, and the third month. The fourth month never came. For 12 months in a row, no salary came because of the MenzGold scandal,” he stated.

Blakk Rasta, recently ‘escaped’ death after an alleged attack on his life  by an unknown assailant who invaded Zylofon FM’s premises.

Watch: I was lured to Zylofon FM with a salary of GHC 10,000 and a brand new Mitsubishi Pajero- Blakk Rasta

Ghanaian actress, Bisa Gbekle has revealed that it’s not all rosy when going under the knife to get your body enhanced. END_OF_DOCUMENT_TOKEN_TO_BE_REPLACED

Ghanaian actress, Bisa Gbekle became the talk of town over the past few weeks after she flew all the way to Turkey to undergo body enhancing surgery. END_OF_DOCUMENT_TOKEN_TO_BE_REPLACED

Ghanaian actress, Bisa Gbekle became the talk of town over the past few weeks after she flew all the way to Turkey to undergo body enhancing surgery. END_OF_DOCUMENT_TOKEN_TO_BE_REPLACED

Ghanaian actress, Yvonne Nelson, has come to the defence of veteran actor, Psalm Ajetefio (TT), over his “plead for leftovers” scandal that has hit the country over the past couple of days. END_OF_DOCUMENT_TOKEN_TO_BE_REPLACED