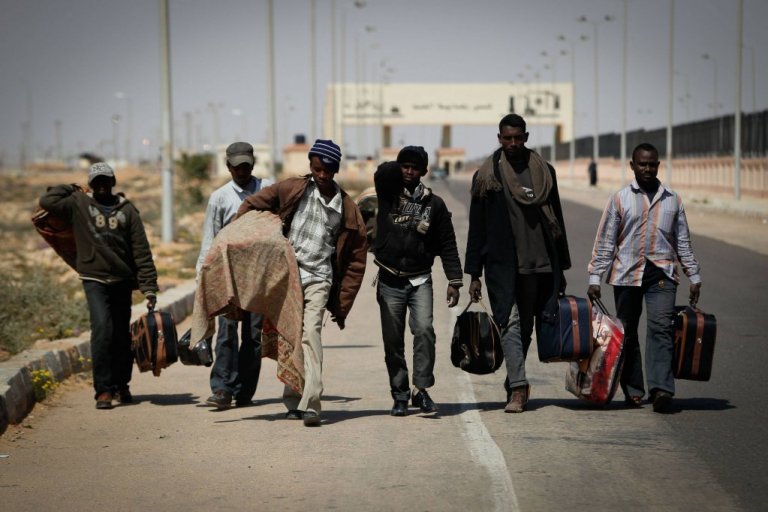 According to Global Slavery Index in 2018, about 9.2 million Africans live in modern slavery, making it the continent with the highest figure. Unfortunately, this isn’t just a domestic situation; modern slavery of Africans also extends to foreign countries. Modern slavery is a menace, and many African immigrants are victims. With the promise of a better living and working condition, high-paying jobs and other incentives which are sometimes shattered, many African immigrants have ended up in unpalatable conditions in foreign countries. More saddening is the fact that not all of these immigrants get to their intended destinations alive.

In the past 10 years, there has been a spike in the number of immigrants from African countries to other continents, including Europe, America, and Asia. One of the major reasons is poverty. The list of nations with the highest unemployment rate is topped by Africa countries.  Namibia and Nigeria currently sit comfortably at first and second position. Notably, Nigeria is the African country with the most foreign immigrants. Many Africans are also in insecure employment and live hand to mouth despite toiling every day.  The minimum wage compared to the cost of living in most African countries is nothing to write home about.

Apart from poor living conditions, armed conflict is another reason Africans flee their home countries in droves. Data from Statista shows 6 African countries among the top 10 countries with the most death by terrorism. The lingering violent crises have made many African countries some of the most unsafe places to reside in. Furthermore, there’s the case of bad governance, as many African leaders are infamous for corrupt practices and negligence. Many countries lack basic amenities such as good roads, standard health care, quality education, and electricity. The humanitarian and economic challenges have created a severe refugee crisis in the continent. So, many Africans leave their home countries mainly to experience a better life.

Legal immigration to most European and North American countries is a lengthy and expensive process. Not everyone can lay their hands on a visa.  In a bid to make it quicker and cheaper, many African immigrants consider dangerous immigration routes, some of which are managed by greedy human traffickers. There are both land and sea routes, with the most common being crossing the Sahara desert or the Mediterranean Sea into Europe. Hence, the majority of African immigrants go through Libya.  Often, the journey starts from Niger, and then they cross to Algeria. They walk a 50 km desert by foot to get to Mount Hugo and then 350 km to get to Obari in Algeria. These areas are open desert without any human settlement. From there, they walk for about 3 weeks to arrive in Libya.

The final part of the journey is crossing the large Mediterranean Sea in boats. From there, they get to different European countries like Italy, France, and Spain. Despite knowing how dangerous these routes are, many African immigrants are still willing to take the risk while being optimistic about greener pastures.

The journey from Africa to foreign countries via the Sahara Desert and the Mediterranean Sea is risky and harsh. Immigrants who fall victims to human traffickers and slave masters become nothing but cargo throughout the journey. Not to mention the harsh conditions they have to travel in. With a minimum temperature of 86 degree Fahrenheit and a maximum temperature of 117 degrees Fahrenheit, the Sahara Desert is one of the hottest places in the world. Travellers are unable to move during the day when the sun is up. They move during sundown until the next morning so they could travel for weeks.

A lot of them die during this period due to the harsh climate. Aside from that, they easily run out of water and food with no alternative. Upon arriving in Libya, some of these immigrants are sold off at auctions for as low as $400. As reported by CNN, there are more than nine slave auction locations in Libya. Immigrants who reach Libya without issues aren’t safe too. Take Sunday Iabarot, for instance, as reported by Time Magazine. He was sold by a “seemingly friendly taxi driver” who offered him a free ride to Tripoli. Once sold, the immigrants are either smuggled to Europe or kept in Africa. Many African immigrants choose to enter Europe through the Mediterranean Sea, where thousands die every year. From 2015 to 2020, 17,931 migrants died in the Mediterranean Sea. There are cases of boat capsizes due to strong wind and waves and death due to cold. The lucky ones travel by air.

For many of these immigrants who successfully arrive in foreign countries, the better life they dreamt of isn’t what they get. Most of them, especially the males, are turned into slave workers at construction sites and farms or drug traffickers. The females are majorly trafficked into sex work. These immigrants work to pay off their debts. Debt here implies the money paid while purchasing them. When they finish paying off this debt, their owners might sell them to a different master, and the cycle continues.

Depending on the benevolence of their owners, some of them get little rewards if they work very hard. These victims are beaten if they refuse to work and worse if they attempt to run away. There are cases of slaves tied with barb wires, burnt, or imprisoned. And sometimes, when the slave masters feel they don’t need them any longer, they take them back into the desert and abandon them.

Despite the poor living condition, these modern slaves must always work to make money for their owners. This hard labour leads to the death of many. Rather than going through all of that, some immigrants prefer taking their life. Others commit suicide out of frustration and depression. Some female victims introduced to sex work become victims of STDs, and many end up with unwanted pregnancies. In a study of 98 trafficking survivors, 28% got pregnant while trafficked.

Some are lured into drug trafficking by drug lords. Like many other organized crimes involving African migrants, the drug kingpins sometimes operate legal businesses to cover their shady activities. They recruit young Africans who deliver illicit drugs to various destinations across the world. These ‘recruits’ are at the mercy and command of the ring leaders and always have to live on the run hiding from law enforcement agents. Many of them are caught and ended up in jail. In countries where drug trafficking is a capital offence, many African migrants have been executed. Sometimes in 2019, there were 1,281 inmates on death row in Malaysia, and 199 of them were Nigerians convicted for drug-related crimes.

With the current economic and humanitarian challenges in many African countries, it is obvious that young Africans will keep exploring illegal and risky routes to Europe, Asia and the Americas out of desperation. This means modern slave masters and human traffickers will continue to capitalize on their desperation to keep their illicit business running. Since the motivation behind this desperate migration is a better living condition, the onus is on African leaders to create an enabling environment where young people can achieve their dreams and aspirations in their home countries without having to undergo servitude abroad. The ever-widening inequality gap between the ruling class and the masses must be addressed with strong political will. This will help curb the menace of modern slavery of African migrants abroad.

Related Topics:African Migrants
Up Next