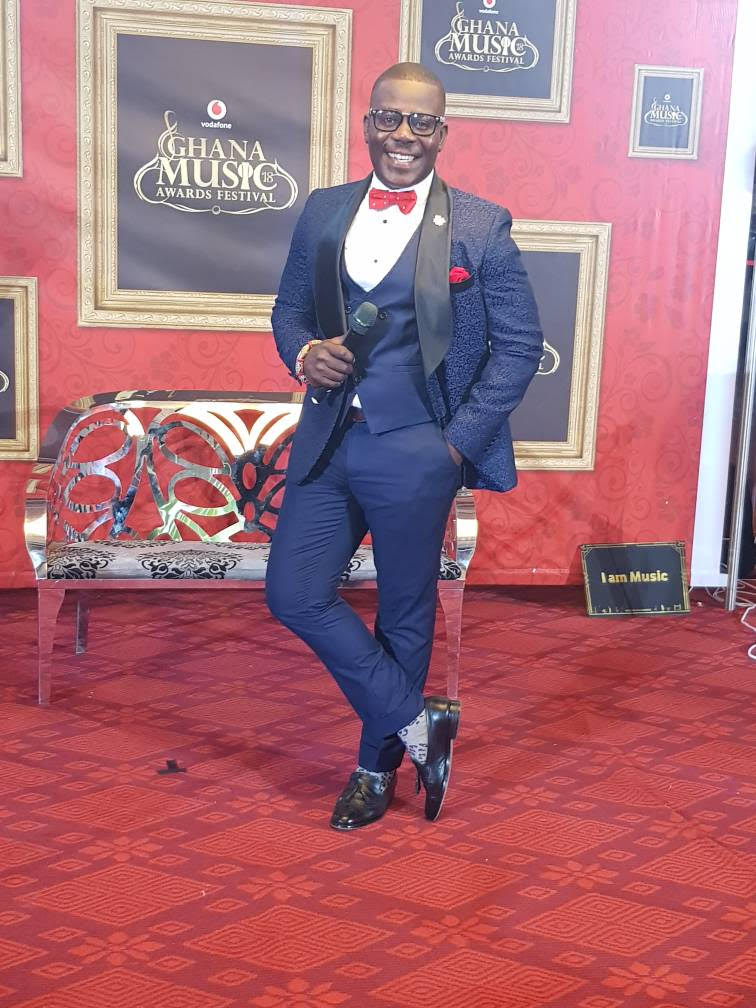 He paired beautifully with AJ Sarpong to successfully host the red carpet telecast for the 2018 Ghana music awards. but how much do you know about the sharp-looking and sharp-minded Johnnie Hughes, from his music to his hosting journey? Johnnie Beresford Hughes Jnr is a quick-witted award-wining Journalist, Consummate Communications Professional and Multi-Talented Radio & TV Broadcaster of Ghanaian ancestry. He is part of the young-enthusiastic future of Media, Arts, Culture & Tourism in Africa. His experience and success examples span thirteen years of excellence both on and off air, while maintaining a unique appeal to diverse audiences. He has attended and successfully completed, Africa’s foremost Communications Institute; The Ghana Institute of Journalism (GIJ) and the Institute of Commercial Management in the UK, where he obtained a Bachelor of Arts in Public Relations, Advanced Diploma in Business Studies and Diploma in Journalism & Media Studies respectively.

Johnnie Hughes; the Bonafide Genius, is currently a co-host of TV3’s NEWDAY, a multiple award-wining Morning magazine on Ghana’s top-tier station, TV3. In addition, he nailed a sterling performance as host of Ghana’s premier cultural and traditional reality beauty pageant; GHANA’S MOST BEAUTIFUL – #GMB2017, along with an energetic live studio audience on TV3 and across the world on @TV3Ghana. He is also the top prize winner for the 2017 Radio & Television Personalities Award for Radio Development Show of the year. On radio, Johnnie Hughes hosts Community Rights Advocacy programme; COMMUNITY CONNECT and Public Torch bearer; SPEAK YOUR MIND: two programmes of essence that broadcasts around the world on 3fm 92.7 MHz and on www.3news.com. Ahead of Ghana’s 2016 Presidential/Parliamentary elections, he anchored ELECTION ZONE, an integral portion of the Election Command Center of the Media General Group, which was adjudged the best coverage for the period by respected media watchers and analysts, GEOPOLL. 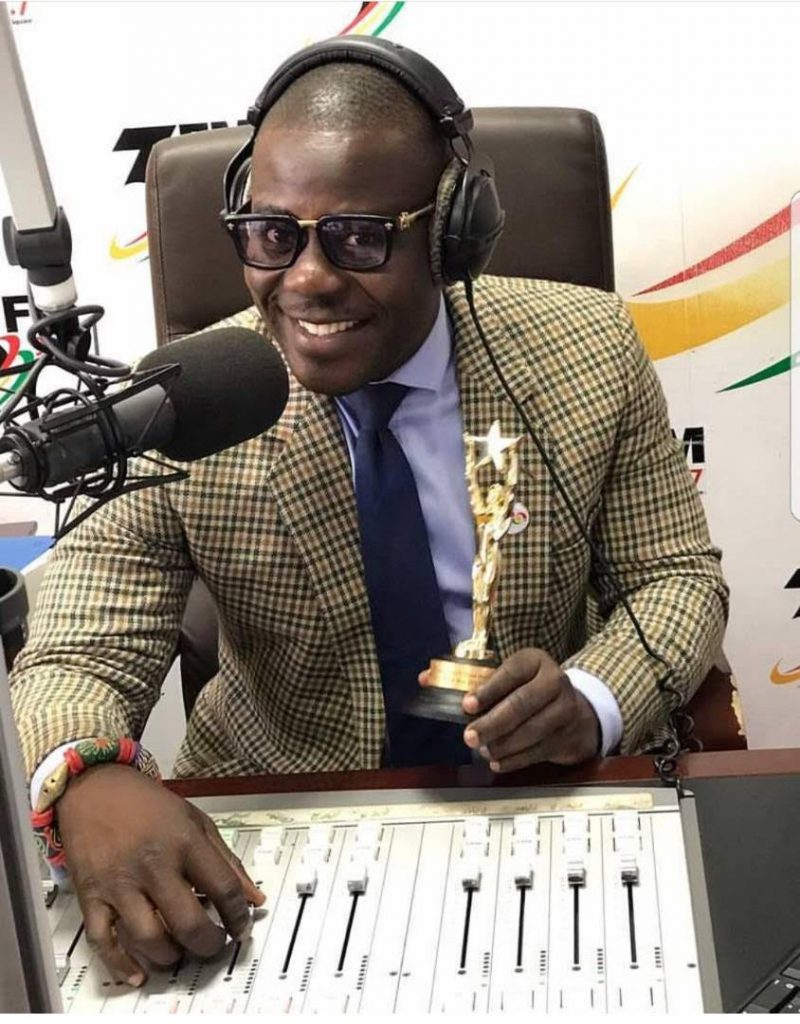 The Bonafide Genius has previously worked closely with the Multiple Concepts Group, USAID, Johns Hopkins University and the Ghana Health Service between 2010 and 2014, to produce and air Ghana’s first and widely viewed television health quiz programme: THE GOODLIFE GAME SHOW on Viasat 1. The thematic areas of Malaria, Water & Sanitation, Nutrition, and Maternal/Neo-natal care, launched him into real community work and a different kind of journalism. Prior to that, he was Morning Show host on the erstwhile Pravda Radio 93.5 (Now Vision 1 fm), a regular, respected and resourceful voice on Pluzz fm and a flagship Presenter of entertainment and lifestyle magazine THE RUNDOWN SHOW & Morning Show ‘DAYBREAK on TV Africa . Earlier in 2008, he captained the BIB, to win the Most Exciting Band Award on TV3’s Bands Alive – Season One. In 2009, the National Union of Ghana Students crowned him a National Debate Champion at her first Jaw-Jaw Contest. Later in 2010, he was unanimously voted Overall Best Student at the British Council’s Master-Class for Presenters and Producers. In 2016 he was named Universal Inspirational Poet at the Pentasi ‘B’ World Friendship Festival. Add to that, the Student’s Representative Council Women’s Commission of GIJ and Archer’s Media Institute bestowed honours on him for his exemplary performance in the media and its impact on society. The year 2017 has also seen him venturing into a new branch of his career; ring announcing for the WBC’s greatest of all time and boxing hall of famer; Azumah Nelson Fight Night 3, 4 and 5 at the Bukom Boxing Arena which was beamed across the world. Add to that, Johnnie Hughes was voted Ghana’s Radio Development Show Host of the year at the Radio & Television Personalities Awards 2017. He has also been nominated to receive honours as The People’s Celebrity Male TV Presenter along with heavyweights like Bola Ray. George Quaye, Kafui Dey and many others. In addition, the Institute of Media Practice, has identified him as one of five potentials for their upcoming MABA Rising Star Award. 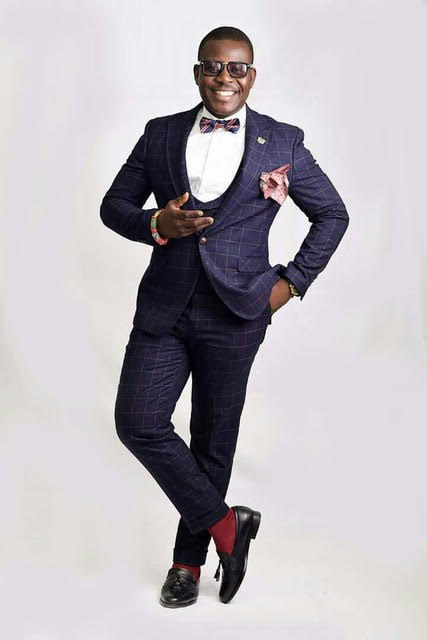 His professional skill and talent as master of ceremonies has placed him on many respectable private and high-brow corporate platforms including: The State Honour of Ethnomusicologist Emeritus Prof Kwabena Nketia @96 (with the President in attendance), Lancaster University Ghana, major campaign launches of the Ghana Health Service, USAID, GhIPSS @10, Alcatel Lucent France Ghana, Anglican Diocese of Accra, British Council, Cardz Group International, Ministry of Energy, KKD@50 just to mention a few. The smooth-voiced-award-winner is also a keen learner, passionate about transforming the mundane into the spectacular and, demanding for the right answers to ensure society’s forward-march and rewarding return on investment. JOHNNIE HUGHES possess a tasteful dress sense and maintains a firm foothold in media through his highly impressive, smooth-style yet, focused presentation and good sense of humour on Television, Radio and with live audiences at both corporate and private events, making him a distinguished brand: a must-watch and a must-listen!]]>

Related Topics:Johnnie Hughes
Up Next

Ghanaian Pizza brand, Pizza Inn has opened a new branch in East-Legon and has FREE pizza pies and more to share this christmas season. END_OF_DOCUMENT_TOKEN_TO_BE_REPLACED

Dancehall act, Stonebwoy has hinted that his legal team is taking serious action against his former signee Kelvynboy for comments he made after he was attacked in Ashiaman recently. END_OF_DOCUMENT_TOKEN_TO_BE_REPLACED

Internet sensation and “King of Gh Rap”, AY Poyoyo has caught the international audience with his unique style of music. END_OF_DOCUMENT_TOKEN_TO_BE_REPLACED

Canadian singer, Justin Bieber has reacted to the sexual assault allegation made against him by a Twitter user identified simply as “Danielle” with evidence. END_OF_DOCUMENT_TOKEN_TO_BE_REPLACED