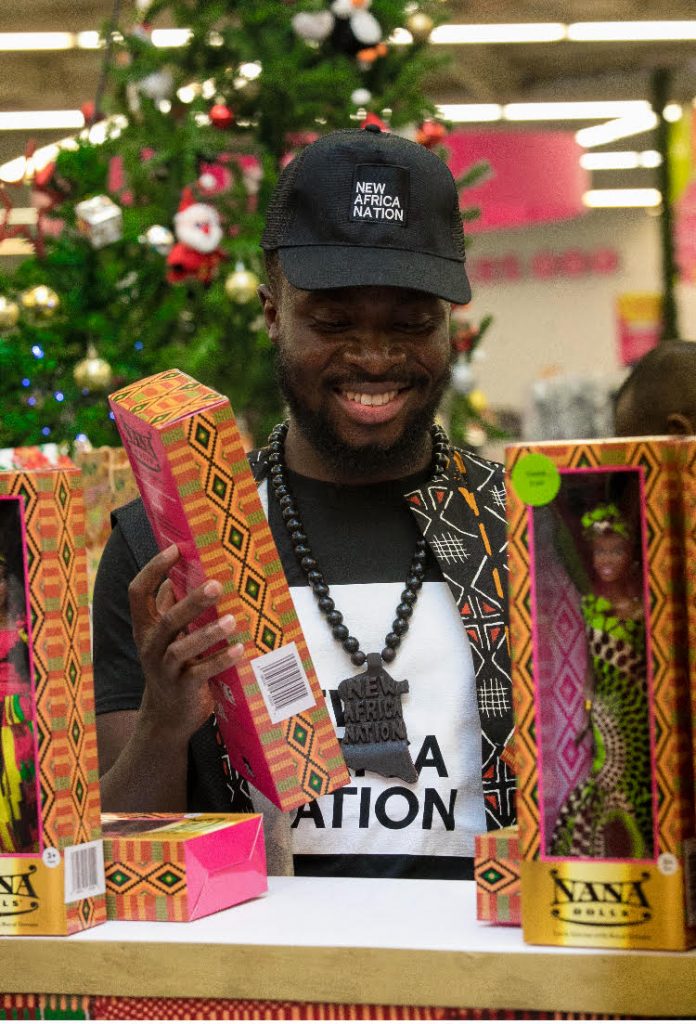 Fuse ODG launches beautiful line of black dolls, “Nana Dolls” at Game, Accra Mall[/caption] Ghanaian-British Afrobeats singer, Fuse ODG is encouraging parents and guardians to desist from purchasing white dolls and get dark skinned ones for their daughters so as to promote Africa. The musician strongly believes, African parents having dolls made to represent their skin colour will ignite the feeling of self-love and ensure their kids appreciate their race while they grow into adults. Launching the ‘Nana Dolls’, at the GAME shop in the Accra Mall, Fuse ODG observed how white dolls are prominently featured in toy shops all over the world. He further bemoaned that Western culture has dominated the world, leading Africans to abandon their values due to inferiority complexes. He explained that the lack of black dolls indirectly and directly promote a self-hate agenda where Africans feel they are “not adequate or good enough to be replicated in the least kind of format”. https://www.instagram.com/p/BrvoQwhltcc/?utm_source=ig_web_copy_link “It’s nice for our kids to see these kind of toys that look like them and feel like queens, princesses and feel like they are beautiful as well. This is why these toys are so important. They promote self-love,” the artiste maintains. Fuse ODG reveals the dolls will also educate the kids as they were made and named after some prominent female African leaders such as Yaa Asantewaa, Nehanda, and Miriam Makeba. He expressed his excitement and urged all to visit GAME shops across the country and grab a Nana Doll – a unique Christmas present for their loved ones, nieces and daughters in support of the “New Africa revolution”. In a land full of Barbies, choose Nana Dolls. *About Nana Dolls* Born Nana Richard Abiona, Fuse ODG in his pursuit of a “New Africa” while paying tribute to dark skinned historic leaders, decided to make the ‘Nana Dolls’. The initiative, inspired by the historical black African women who demonstrated bravery, confidence, among other attributes was announced in 2016 by the afrobeats artiste. Fuse ODG in an earlier statement disclosed the Nana Dolls will inspire the younger generation to know their history and the significant traits they possess. “Nana means Queen or King and these dolls represent power, bravery, confidence, leaders and many great attributes that the younger generation need to know that they already possess,” Fuse stated. Fuse ODG’s love for Africa cannot be overemphasised as he recently launched the ‘This is New Africa’ (TINA) Festival to change the bad narrative of Africa and place the continent on the world map. He is confident the TINA Festival will create the platform for Africans to retell their real stories. The maiden TINA festival is scheduled for Friday January 4, 2019 at the Round Pavilion inside the Ghana International Trade Fair Centre. The music festival will bring together the African home and abroad to appreciate the uniqueness of continent through music. Artistes lined up for the event include Fuse ODG – the originator of the TINA Festival, Ghana’s award-winning rapper, Sarkodie, Joey B, one of Africa’s finest hiphop artiste, Stefflon Don, Lethal Bizzle, and some underground artistes.]]>