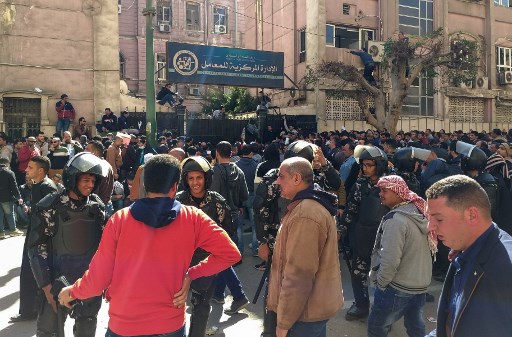 Egypt reported its first fatality from the coronavirus on Sunday, with the Health Ministry saying a 60-year-old German tourist, who had arrived in the country seven days ago and was taken to hospital in the Red Sea resort of Hurghada, had died.

The country has been rushing to protect its important tourism sector, reassuring people it is safe to travel there after an outbreak of the respiratory virus on a cruise ship on the River Nile.

Officials said on Saturday the coronavirus had been detected in 45 people, including foreign tourists, after the vessel reached the southern city of Luxor. Until then, Egypt had reported only three confirmed cases of the virus.

Nine of them were in contact with the previous detected cases including a medic, he added. The remaining case was for a man returning from Saudi Arabia after a religious visit.

The ministers of tourism, health and civil aviation toured a temple on Sunday in central Luxor, across the Nile from the Valley of the Kings where pharaohs were buried in tombs carved into rock.

“We are here to respond to rumours saying that there are no tourists and people are afraid of coming. Thank God, people are here,” Khaled al-Anani, the tourism and antiquities minister, told state television before the camera panned across to show tourists queuing to enter the site.
Fear and stoicism where SA’s first coronavirus case was confirmed

All roads leading to the manicured lawns of Hilton, home of the North Face and Land Cruiser brigade, were paved with panic and frustration this …

“No to exaggerated reactions. Our eyes are on everything,” said Health Minister Hala Zayed.

The German man who died had tested positive for the coronavirus on Saturday, the Health Ministry said. He was in Luxor before being moved to Hurghada.

Coachella Postponed Due To Coronavirus?

A 12-year-old boy has confessed to accidentally shooting his mother, a Nigerian woman, after initially claiming an intruder killed her in their US home. END_OF_DOCUMENT_TOKEN_TO_BE_REPLACED