Gerry Marsden, the iconic voice behind Liverpool’s famous anthem ‘You’ll Never Walk Alone’, has died at the age of 78.

The singer who formed a band called Gerry and the Pacemakers, and completed sell-out tours around the world, passed away following a short illness.

Originally a show tune in musical Carousel, Marsden and his band covered the hit in 1963, and it was number one in the UK Singles Chart for four weeks.

The club’s fans soon adopted the song as an anthem sung before and after games,

Liverpool’s legendary manager Billy Shankly was reportedly ‘in awe’ of the track when he heard it on a pre-season coach trip the summer it had been recorded.

Shankly loved the hit so much he reportedly told Marsden in 1964: “Gerry my son, I have given you a football team and you have given us a song.”

A year later Shankly picked it as his final track on Desert Island Discs ahead of the 1965 FA Cup final.

Since then till today it has been the club’s number one anthem. 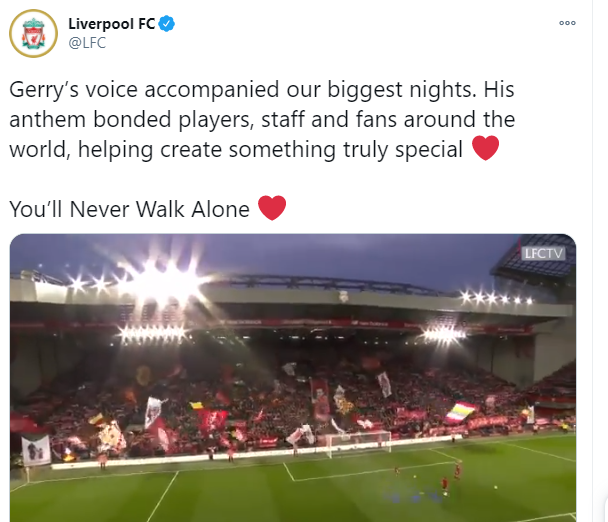 Related Topics:Gerry Marsden
Up Next

END_OF_DOCUMENT_TOKEN_TO_BE_REPLACED

“What do celebrities & influential leaders believe in?” As you know, celebrities and influential leaders are role models for young and old generations, and they can influence society and impact the world negatively and positively. Spiritual leader and multi-award-winning life coach Asim Aliloski has seen that successful people on top of their game have been searching for a higher power. END_OF_DOCUMENT_TOKEN_TO_BE_REPLACED

American rapper, Kanye West has reacted to the news of the end of the relationship between his ex-wife Kim Kardashian and Pete Davidson. END_OF_DOCUMENT_TOKEN_TO_BE_REPLACED

Prosecutors are reportedly asking the federal court to seize about $28K from R Kelly’s prison-inmate account since he has $140,000 in court-ordered fines. END_OF_DOCUMENT_TOKEN_TO_BE_REPLACED

Elon Musk has accused the social media platform, Twitter, of fraudulently holding back information about the company as part of a countersuit. END_OF_DOCUMENT_TOKEN_TO_BE_REPLACED