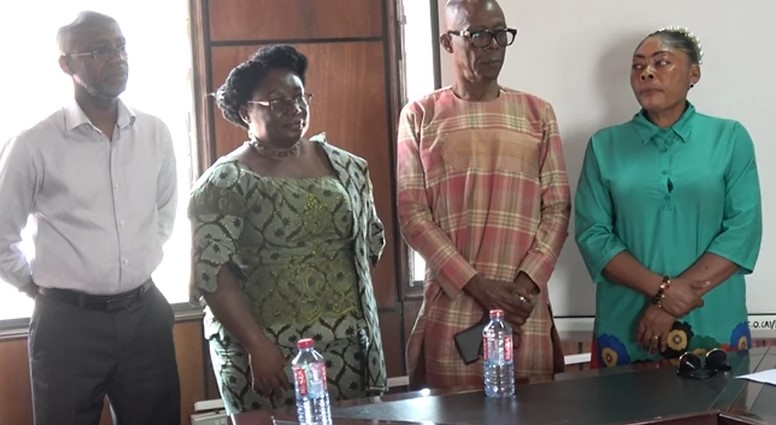 A 5-member team has taken over the management of the Ghana Music Rights Organisation (GHAMRO).

This follows a court injunction to disband its current board. The Accra High Court in a ruling on Tuesday, July 19, 2022, said the management of GHAMRO disregarded an interlocutory injunction placed on the election, which was held on March 15, 2022.

In a press conference today, the management responded to the court verdict, saying some aggrieved members took the organization to court over the mandate of the Board and the Election Process.

Following the dissolution of the Board by the court, the Chief Executive Officer of GHAMRO, Abraham Adjatey, announced the institution of a team that will handle the affairs of GHAMRO until they go to court again on 11th August 2022.

“We are a law-abiding institution and must follow the law. So on that note, I have immediately informed the board, and I am informing you, that the Board has been set aside,” he said.

The 5-member team is made up of Augustina Addison, Abraham Kofi Boakye, Diana Hopeson, Ahmed Banda, and Rex Omar.

Speaking at the press conference Rex Omar assured that GHAMRO is vigorously pursuing its mandate to license music users, collecting the said fees, and distributing the same.

My ex was insecure, reason why I had to let him go- MzVee

Suits and Heels: How the stars turned up for King Promise ‘5STAR’ album soiree

The woman who led the “Me nsa aka ooo” TV commercial 13 years ago to promote MTN’s Mobile Money (MoMo) has been gifted a 2-bedroom house. END_OF_DOCUMENT_TOKEN_TO_BE_REPLACED

It’s difficult to predict where Stonebwoy will be in the coming days, weeks, months, or years. As a musician with a keen interest in pushing his sound to the world and etching his name in the minds of new fans, 2022 has been described as his busiest music year thus far since gaining mainstream recognition in 2012 with Pull Up—seven years after he made his official debut—the musician confirmed this via social media after his last summer show. END_OF_DOCUMENT_TOKEN_TO_BE_REPLACED

Ghanaian actress, Nana Ama McBrown has revealed that there’s absolutely no bad blood between her and her ex boyfriend, rapper, Okyeame Kwame. END_OF_DOCUMENT_TOKEN_TO_BE_REPLACED

Veteran Ghanaian actor, Kofi Adjorlolo has denied claims that he was set to marry the mother of popular Dancehall act, Shatta Wale. END_OF_DOCUMENT_TOKEN_TO_BE_REPLACED