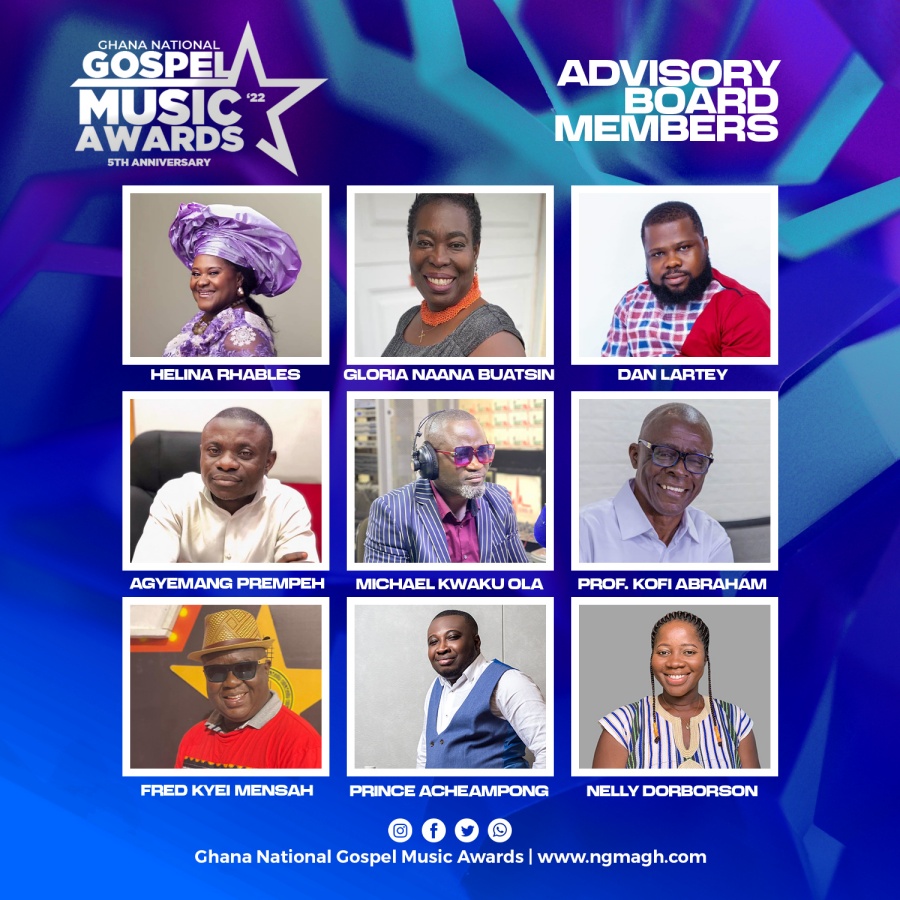 Organizers of the prestigious Ghana National Gospel Music Awards have unveiled members of its advisory board.

The announcement comes ahead of its 5th edition which is scheduled for August 2022.

The board is made of individuals from different facets of the music industry including broadcasters, musicians, engineers and more.

Below is a full list of the members and their profiles.

Known by fans and listeners of Power FM as Agyemang Prempeh, the broadcaster comes with a broad wealth of knowledge gathered from several years of experience in the music and radio industry.

With a career spanning over a decade, Dan Lartey has over the years contributed in writing, and conversations on the various disciplines in the arts both on Radio and TV.

Dan Lartey has worked with several musicians on a promotional basis and served on boards for various music awards across the country and beyond.

He is the CEO of Remedi Entertainment; a research and promotions outfit.

A proud old boy of Prempeh College in the Ashanti Region, Fredyma, as he is affectionately called by both the old and young is a revered sound engineer credited with unearthing and supporting several talents including musicians and sound engineers.

Some of these talents include Ofori Amponsah, Late Kofi B, Celestine Donkor, JQ, Appietus, Bishop Mantey and many others.

With a pool of knowledge, Fred Kyei Mensah has worked as a sound engineer for 37 years and also served as a radio pundit for 34 years.

Popularly referred to by his last name, Ola is a filmmaker, an on-air radio presenter, a talent manager and a PR person.

He has a pool of knowledge from over two decades of radio work.

Helina Chablis needs no introduction. A popular gospel musician from the twin city of Sekondi, Takoradi, in the Western Region of Ghana, Helina started performing at an early age coming from a predominantly Christian background.

She trained as a teacher and after teaching for nine years, she felt the call of God to pursue her music career fully.

She release her maiden album titled Helena Rhabbles Volume 1 in 1994. The album became an instant hit with the public. Her songs became the toast of praise and worship singers in churches across the country.

She followed that up in 1995 with Volume. 2 featuring powerful tracks like So So Wonders and Kokromotsi. She has since not released an album.

Known in real life as Abraham Kofi Boakye, Professor Kofi Abraham is a great Ghanaian composer, songwriter, and performer with over 53 years of ministry under his belt.

Given the title ‘Professor’ in Koforidua by a member of the Late President Hilla Liman’s administration, Professor Kofi Abraham was the head of the True Gospel Band and the Ashanti Regional Music Union of Ghana (MUSIGA).

His contribution to gospel music goes back to the 1970s.

He served as the vice-chairman of MUSIGA Ashanti Region for 12 years and later became the chairman for eight years.

He has received recognition from the Asantehene, President Nana Akuffo Addo and other institutions including Elpizio from Canada. He recently received a lifetime achievement award from The Vodafone Ghana Music Awards.

Professor Kofi Abraham currently serves as a Board Member of the Ghana Music Rights Organisation.

Nelly holds an MPhil in Communication and Media Studies (Business Communication) from the University of Education, Winneba.

She possesses an extensive background in interpersonal and public communication skills, administration, customer service and team-leading, in a wide variety of high-pressured and deadline-driven environments.

Her area of specialization is Public Relations, Advertising, Organizational Communication and Development Communication.

Nelly Dorborson is currently the Dean of Students’ Affairs.

Prince is a banker by profession and has over 9 years of experience within the financial services sector, ranging from Insurance, Investment, and banking operation. He equally has vast experience in branding and marketing and the art of sales.

Prince holds a Master of Arts degree in Economic Policy Management and a Bachelor of arts degree in Sociology and Philosophy from the University of Ghana. He also holds a certificate in Business Intelligence and is a Power BI analyst which were both attained from NIIT Prince has enough understanding of the digital space and the tenants that these platforms thrive on.

His appreciation of the music space also enhances and provides the board with an opportunity to tap into his knowledge for a successful awards ceremony. He possesses the needed attributes to steer and improve the works of the advisory board. Prince is a go-getter, self-driven and motivated individual who passionately yearns for results and the attainment of set goals.

Popularly referred to as Naana Buatsin, she is the other half of the duet Naana and Dan.

Gloria Naana Buatsi is a baker, singer and professional nurse.

Fecko out with ‘WorkChop’ feat. Villy and Yung Pabi

GuiltyBeatz is ringing in the summer! The Grammy-nominated Ghanaian producer and DJ is back with another dazzling solo effort – an Amapiano-infused dance anthem ‘Universe’ featuring Pop sensation, Mr Hudson and buzzing Ghanaian singer, Twitch 4EVA. END_OF_DOCUMENT_TOKEN_TO_BE_REPLACED

The host of Joy FM’s Strong and Sassy, Animwaa Anim-Addo, has tied the knot in a private ceremony. END_OF_DOCUMENT_TOKEN_TO_BE_REPLACED

Grammy award-winning Nigerian musician, Burna Boy is trending on Twitter over his choice of outfit at a recent concert. END_OF_DOCUMENT_TOKEN_TO_BE_REPLACED