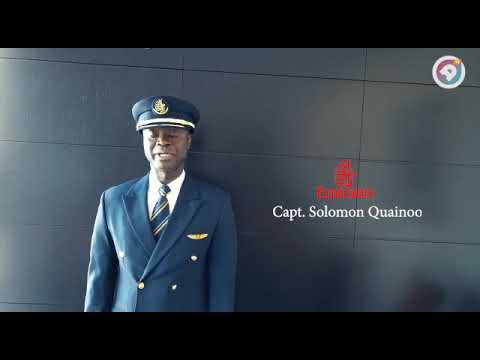 Captain Solomon Quainoo, a Ghanaian pilot with Emirates Airlines will be flying the biggest passenger aircraft in the world to Ghana for the first time ever, as part of activities to to mark opening of the new Terminal 3 at the Kotoka International Airport. Educated at the Koforidua Secondary Technical and the University of Ghana, his career spans about 14 years with seven and half of it with Emirates Airlines. He has operated different types of aircraft including Boeing 777 and A340 before gaining command to pilot the A380, the biggest passenger aircraft in the world. Captain Quainoo will be the man in the cockpit when Emirates operates the A380 to Accra, Ghana for the first time in a one-off flight when the Terminal 3 is inaugurated on Tuesday, October 2. He is particularly happy to be the one operating the iconic flight to the mother, as he revealed in an interaction with me at the Emirates Group headquarters in Dubai.   https://youtu.be/zxkqgzxX3QY   The one-off A380 flight EK787 from Dubai, will arrive at 11:35 hours and be on ground for more than six hours before it returns to Dubai as flight EK788 departing at 17:50 hours. The Emirates A380 flying to Accra will be set in a three-class configuration, with 426 seats in Economy Class on the main deck, 76 flat-bed seats in Business Class and 14 First Class Private Suites on the upper deck. Once the A380 reaches cruising altitude, passengers in the First Class can enjoy Private Suites, and Shower Spas, an Onboard Lounge for First Class and Business Class passengers that offers a wide range of drinks and canapés, as well as space to socialise or simply relax at 40,000 feet. Passengers travelling on the main deck in Economy Class can enjoy stretching out in seats with a pitch of up to 33 inches. Passengers in all classes will enjoy Emirates’ multi award-winning inflight entertainment system, ice, offering over 3,500 channels of on-demand entertainment. The largest selection of programming in the sky includes a broad selection of movies, shows, music and other programming from Africa, and up to 20MB complimentary on-board Wi-Fi. This year marks the 10th anniversary of the Emirates A380. As the largest operator of the double-decker aircraft, Emirates’ currently has 104 A380s in service and 58 pending delivery, more than any airline globally. The airline also recently announced a US$ 16 billion (AED 58.7 billion) deal for 36 additional Airbus A380 aircraft.]]>

Related Topics:Captain Solomon Quainoo
Up Next

The Hewale Lala (Song Of strength) hit maker Perez Musik gets ready to have his first-ever major concert. END_OF_DOCUMENT_TOKEN_TO_BE_REPLACED

Kofi Sonny, CEO of 610Music, a direct representative for Universal Music Group in Africa, unveiled two of his newly signed artistes to the world over the weekend. The event pulled in dignitaries from all over the globe to witness what many have dubbed “the birth of greatness.” END_OF_DOCUMENT_TOKEN_TO_BE_REPLACED

GuiltyBeatz is ringing in the summer! The Grammy-nominated Ghanaian producer and DJ is back with another dazzling solo effort – an Amapiano-infused dance anthem ‘Universe’ featuring Pop sensation, Mr Hudson and buzzing Ghanaian singer, Twitch 4EVA. END_OF_DOCUMENT_TOKEN_TO_BE_REPLACED

The host of Joy FM’s Strong and Sassy, Animwaa Anim-Addo, has tied the knot in a private ceremony. END_OF_DOCUMENT_TOKEN_TO_BE_REPLACED

Grammy award-winning Nigerian musician, Burna Boy is trending on Twitter over his choice of outfit at a recent concert. END_OF_DOCUMENT_TOKEN_TO_BE_REPLACED