Global superstars, Usher, Stormzy, and SZA have arrived in Ghana for the Global Citizen Festival.

Ahead of tomorrow’s concert, SZA who has been in Ghana since Monday has been exploring the country from Cape Coast to Aburi.

From walking on the Kakum Canopy Walk to swimming in the Boti Waterfalls, SZA took to social media to express her joy in visiting and experiencing Ghana.

Read Also: Usher visits Chorkor Community ahead of his performance at the Global Citizen Festival in Accra

“ACCRAAAA !! Ghana I’m so blessed to be here this has been the most incredible trip ever! I’m so excited to see all of you tomorrow !!! Meet me in black star square and please be early !!!”

“Nah but really tho GHANA SLAPS.everyone should come here”  she wrote in another post.

Nah but really tho GHANA SLAPS 🇬🇭 🥹 everyone should come here #GlobalCitizenFestival pic.twitter.com/run9G0yqfs

American crooner & Global superstar, Usher dropped down in the motherland and has spent time interacting with local school children in Chorkor.

The R&B singer is already enjoying his stay in the West African country with a visit to the Chorkor community in Accra.

In photos published by the Ghana Tourism Authority, Usher toured a basic school in the country’s capital alongside singer SZA who is also billed to perform at the Global Citizen Festival. 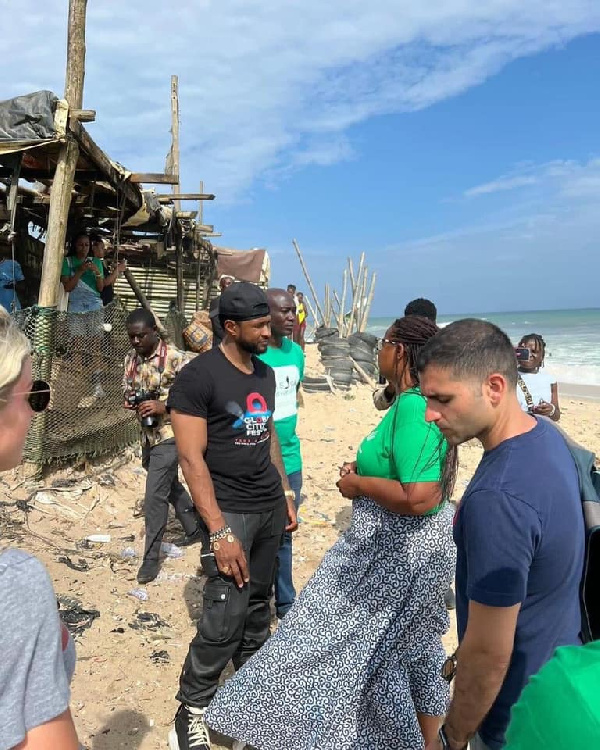 Marking the 65th anniversary of Ghana’s independence and the 20th anniversary of the African Union, Accra’s iconic Black Star Square will see live performances from Usher, SZA, Stormzy, Gyakie, H.E.R., Sarkodie, Stonebwoy, and TEMS with more to be announced.

Global Citizen is calling for world leaders, major corporations, and philanthropic foundations to take to the Global Citizen Festival stages and announce new commitments to End Extreme Poverty NOW, including:

Deploy Financing NOW and immediately meet the total goal of reallocating $100 billion in IMF Special Drawing Rights (SDRs), by making up the $40B shortfall.

SDRs are a type of reserve asset mostly sitting unused by the world’s wealthiest countries. These rights can immediately provide new and affordable financing relief for countries at high risk of financial and debt distress.

Related Topics:Global Citizen Festival
Up Next

Ghanaian broadcaster, Kafui Dey is on a mission to combat illegal mining in Ghana and wants to use any means possible to bring the world’s attention to the problem. END_OF_DOCUMENT_TOKEN_TO_BE_REPLACED

Harvey Mason Jr, CEO of the Grammy Awards, has shared insights on the nomination process and how to win a GRAMMY with Ghanaian artists during a private dinner meeting. END_OF_DOCUMENT_TOKEN_TO_BE_REPLACED

Harvey Mason Jr., the Chief Executive Officer (CEO) of the Recording Academy, organizers of the Grammy Awards, has said there are some misunderstandings regarding the creation of an Afrobeats category in the Grammy Awards. END_OF_DOCUMENT_TOKEN_TO_BE_REPLACED

The Chief Executive Officer of Big Ideaz Consult, Kojo Poku has revealed that none of the artists who were billed to perform at the recently held Global Citizen Festival in Accra were paid a performance fee. END_OF_DOCUMENT_TOKEN_TO_BE_REPLACED

Ghanaian musician, Kirani Ayat has called out the Presidency for using some portions of his music video in an advertisement without his permission. END_OF_DOCUMENT_TOKEN_TO_BE_REPLACED

The voting portal for the 2022 edition of the All Africa Music Awards (AFRIMA) opened to the public on Sunday, 25 September at 21:00 (CAT), to decide the winners of each of the 39 award categories, globally. END_OF_DOCUMENT_TOKEN_TO_BE_REPLACED