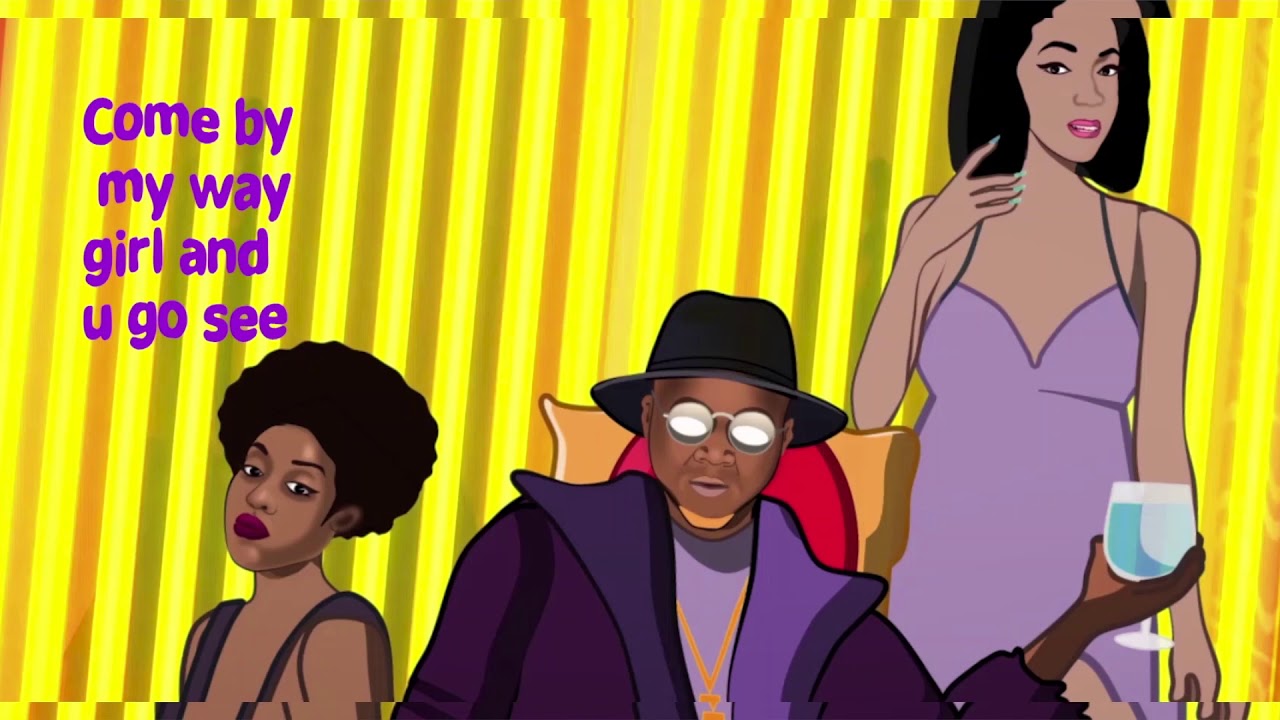 Award winning artist GoldKay has been making waves both here in the UK and in his native Ghana, gaining fans across the globe along the way with his unique spin on Afropop – coining his own style AfroVibe.

This fresh sound is evident on his new single ‘Like That’ which mixes elements of Afroswing, RnB and Dancehall. The track also serves to announce the release of his up-coming debut EP entitled ‘Questions’ which this is the first single to be taken from.

To accompany the single, which has already garnered 25K streams on Spotify, GoldKay has now dropped this fun animation music video which mirrors the holiday feels that the track is based around. Watch it here and soak up the vibes! This month he went in to BBC London Radio to talk about his TV appearances, the transition to being a solo artist and the news track, which has also received support from Conversations About Her and plethora of Spotify playlists (including Daily Hits and AfroLAB).

Musically ‘Like That’ is centred around a laid back Afrobeat rhythm, with GoldKay’s melody-rich vocal delivery punctuated with chorus hooks from the aptly named Captain Hook – resulting in a smooth, radio friendly jam nicely timed for these sunnier times. The love song which was inspired by a memorable holiday GoldKay enjoyed before recent events took hold across the world. Harking back to those times he explains:

“As we are approaching summer, the Afroswing vibe gives it that holiday feel, lifting spirits during this difficult time. It gives the listener room to imagine or place themselves in this holiday story.”

inmates at Aylesbury Young Offenders Institute in forming the prison’s first choir and the show’s finale performance. In 2018 he was awarded a highly coveted Ghana Music Award for ‘Best UK based Afrobeat Artist’ that year, and prior to his solo career, GoldKay – as part of the acclaimed gospel choir Gospel Singers Incognito was featured on various TV shows such as BBC All Together Now, Channel 4 Celebrity Come Dine With Me, ITV Britain’s Got Talent and Sky 1 A League Of Their Own. On stage he has performed to audiences across the UK, Europe, USA, Mexico and the Dominican Republic and has also provided backing vocals for various artists such as Dappy, Jaz Ellington (The Voice), Crazy Cousins and many more. Perez Musik, the Blema Teasaa  hit maker is back with another beautiful song titled Hewale Lala.
‘Hewale lala’ which mean Song Of Strenght in English is the first Ga song off a 5 track gospel EP titled Delivered by Perez musik.

This single, just like the other songs off the EP is inspired by a series of life experiences and the ultimate realization that life is best lived when one totally submits to the Holy Spirit.

The beauty of the song is expressed in a creative use of the Ga language garnished with an english hook. The song is indeed soothing and inspiring. The sound is different and awakening. It is a “must have” on your gospel Playlist.

From the sound released on this single, worshipers and music listeners should prepare to be dragged into the presence of God because Perez Musik is surely carrying some fresh fire this year.

Perez Recounts in an Instagram post;
“One night, on my way to my studio after a very unexpected rough and tough morning. I started to wonder about the true purpose of life as I felt frustrated on every side. I wanted to give up but suddenly the Holy Spirit ministered this scripture in my heart- “Fear thou not; for I am with thee: be not dismayed; for I am thy God: I will strengthen thee; yea, I will help thee; yea, I will uphold thee with the right hand of my righteousness.”

Isaiah 41:10
I immediately felt this song drop in my spirit. I began to sing the lyrics and melody with so much ease, I felt a positive shift in my physical, emotional and mental state.
It is my heart desire that this song will affirm your faith in Yahweh and restore faith if you have lost it.”

The other titles on the EP are Ayeyi Ndwom, Made for you, Giver of My Life and Tse Ofe(Almighty Father) . 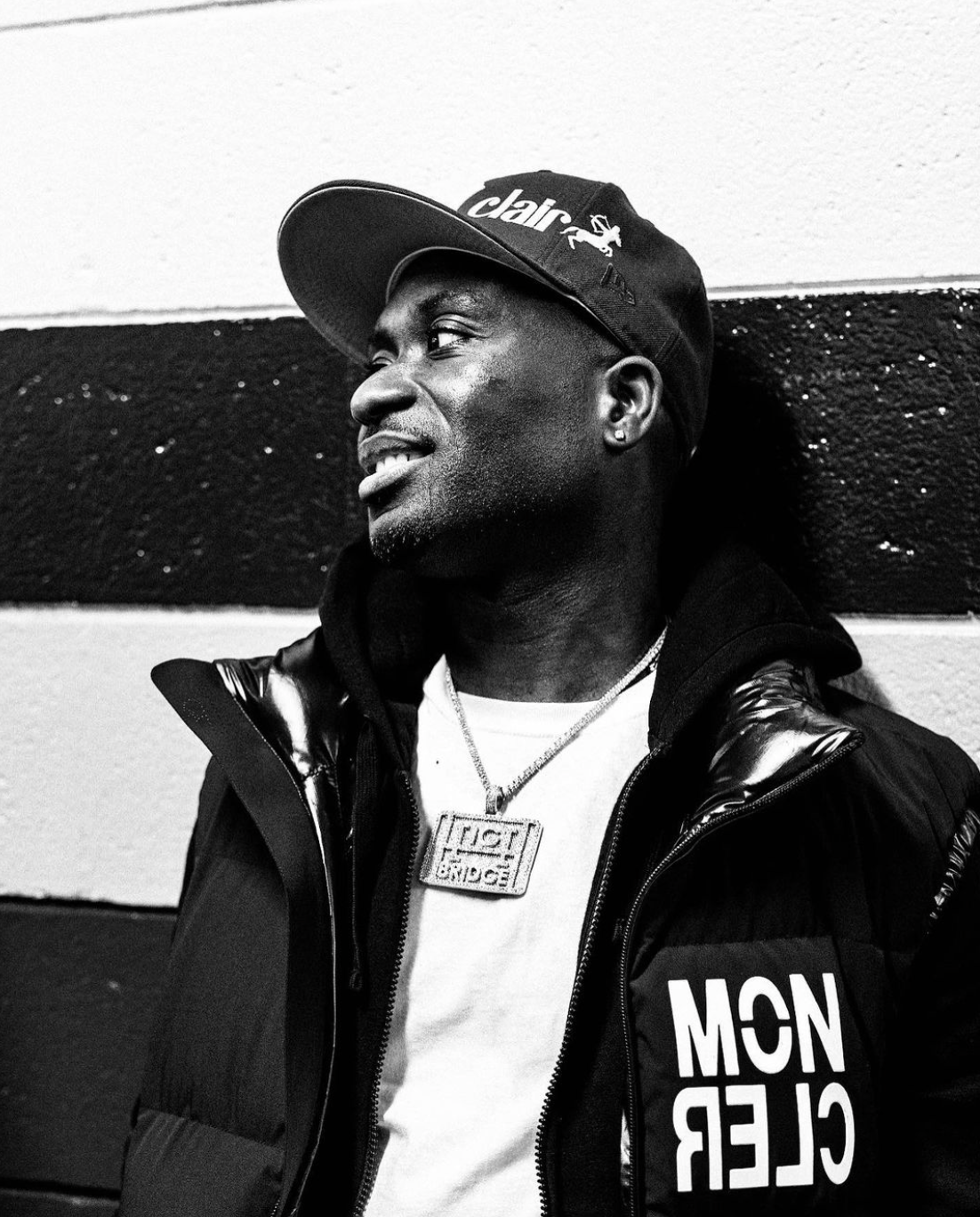 Michael ‘Emm’ Acheampong-Boateng, President of Highbridge the Label, has explained that it makes sense for African musicians do push the Afrobeats agenda into the US market, since that is what is hot at the moment.

“Afrobeats is not new, but in the US, it is. For example, Pop Smoke made drill music with UK beats, that’s how he was introduced to the market. The plan before he died was to transition to more traditional music for people to enjoy. You saw that in his first album after he passed away. If you are a good businessman, the first thing to remember is that you are a business so you position yourself well in order to be successful. If there’s a market for Afrobeats in America and you’re looking into breaking into the market, then you need to come in with what they want and slowly transition to whatever you are looking to bring and see how the market reacts to that,” he said in an interview with Ameyaw TV.

Asked whether the Asaaka drill music from Ghana was making similar waves in the US, Emm said it wasn’t the case yet.

“I didn’t see it in the US. If I did, I saw it in the African community in the US. If there was an African party, then that’s where you would see it but if you move from the subset of that population, then it didn’t really travel. Afrobeats however, is traveling outside of the African community. So again, I don’t think rappers doing Asaaka should abandon it. But they should be aware that if they want to get a commercial appeal, they should lean towards Afrobeats. Because with rap, Americans speak English, so if they can’t understand what you’re saying, then it’s a little bit tricky.”

Highbridge the Label is an American record label founded by A Boogie wit da Hoodie, Don Q, Quincy “QD” Acheampong and Sambou “Bubba” Camara in 2016, based in New York City. 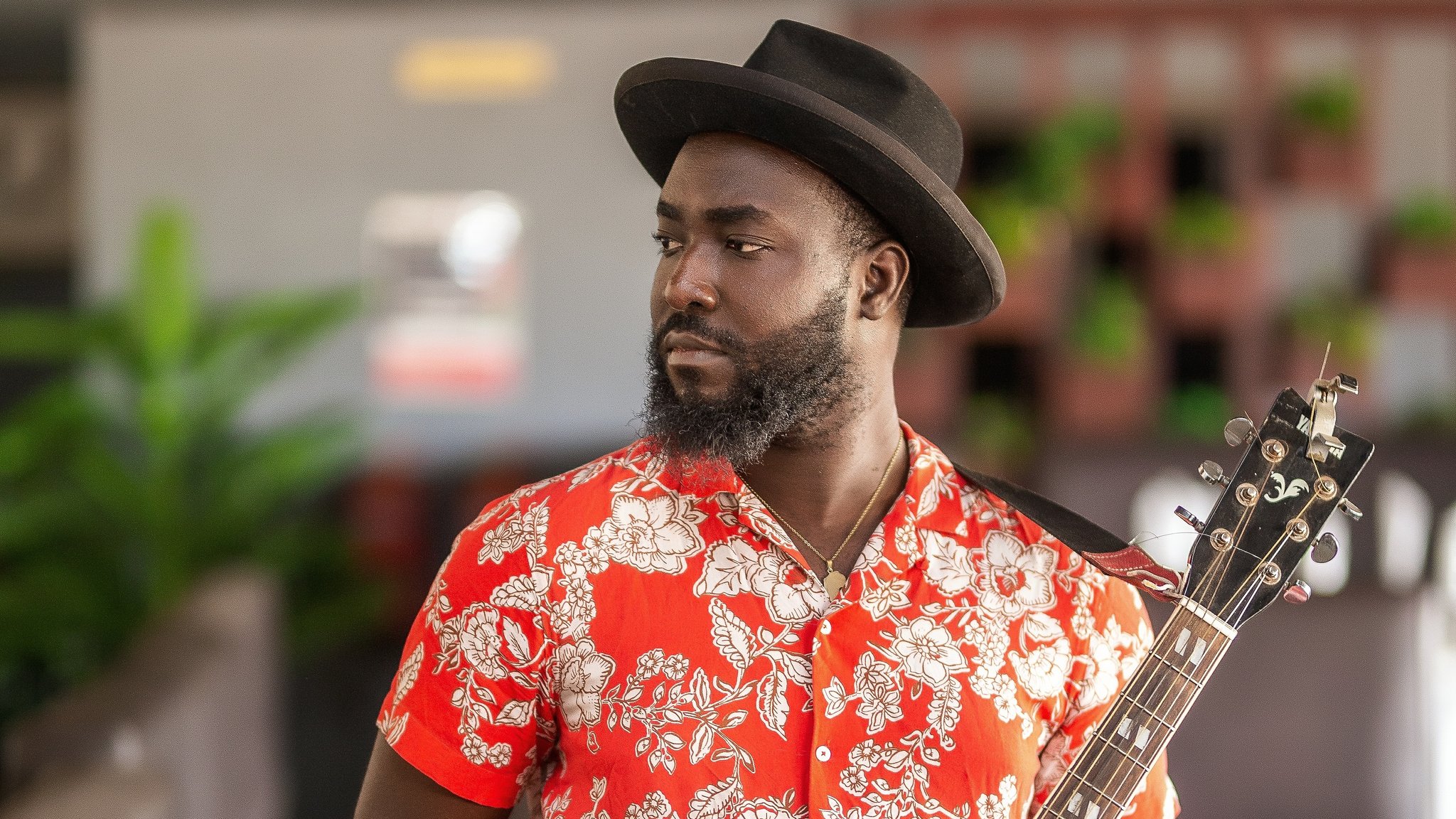 Former Vodafone Icons and MTN Hitmaker contestant Derrick Music has revealed he is a self-taught piano and acoustic guitar player.

The musician who has countless performances and a few singles to his credit made the shocking revelation when he made an appearance on the maiden edition of Live Lounge, a newly introduced segment on growing YouTube channel BTM Afrika.

“Generally I have a passion for music. Anything about music intrigues me. At first, I used to play the grand piano (that was also self-taught). I was playing at dinners, weddings etc but the problem I had was transporting a grand piano (it’s huge) so I contemplated on getting an instrument that is portable and that’s when I settled on the guitar. I took that bold decision and bought the first guitar and it’s been massive since then,” he said.

Derrick Music brought his A-Game to life as he made an appearance on the maiden edition of Live Lounge.

Starting off with an acoustic rendition of his newly released single Kpalanga, the former Vodafone Icons and MTN Hitmaker star quickly transitioned into performing Anadwo by King Promise and other subsequent songs. 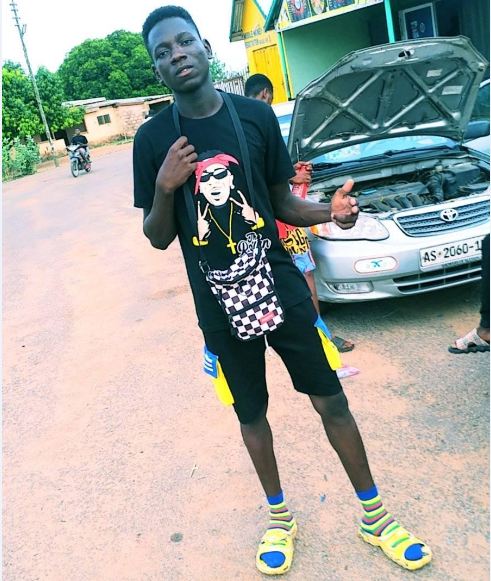 Radikal’s real name is Stephen Abalungo and he proudly hails from Kandiga, a popular community in the Kassena Nankana East District of Upper East Region.

Having graduated from ZAMSTECH SHS recently, Supah Radikal,22, is highly determined to make his mark in the Ghanaian music scene with the hope of taking hip-hop rap to new heights. He believes that music is a vital tool to transform the lives of the ghetto youth.

“Rapping Machine, Am the beast from the East..go ask Aziz how we set records like Kilah Bee..no time to waste, prepare for the massive hip-hop banger from RDK..it will be my first release of the year 2022.. Africa punches Kilah

Radikal is the rapper behind popular hit songs likes “Destiny” and “Bemsoe”, which you can stream on SoundCloud“. As an avid lover of entertainment, RDK is the real deal when it comes to the rap game. The self-styled African punchline killer is here to stay.

“LET’S TRY TO BUILD UP N IMPROVE OURSELVES FROM THE INSIDE.. DON’T THINK ABOUT ONLY THE OUTSIDE WORLD.. IT’S GOOD U WORK SECRETLY INSIDE.. SUCCESS WILL BRING IT OUT 1DAY…#SUPAH #RDK #DTB 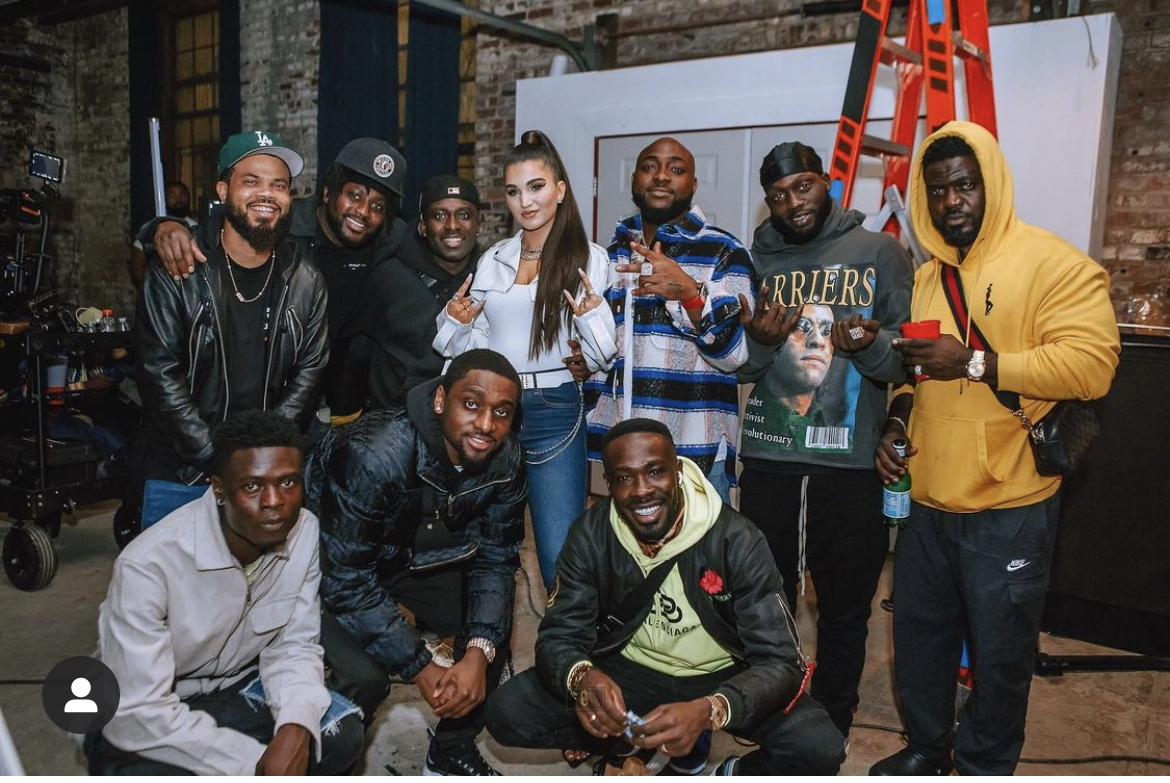 Michael ‘Emm’ Acheampong-Boateng, President of Highbridge the Label, has explained the need for African artists to explore ways of breaking into global music markets such as the US.

Speaking about how Afrobeats has managed to break into mainstream American music in recent times, Emm told Ameyaw TV that it didn’t happen by chance. According to him, A Boogie Wit Da Hoodie’s 2018 single, ‘Way Too Fly’ featuring Davido; and other strategic collaborations have helped contribute to the phenomenon.

“That’s not a mistake, it’s not by chance. I think back in 2018 when Boogie was on fire, he did a song with Davido and prior to that they didn’t really play afrobeats music on the radio. After Boogie did that song with David, we started to hear more Afrobeats on the radio in America, specifically in New York City.”

“The rest of the guys had good music, but they had to be introduced into the marketplace. We helped introduce them to the marketplace. And I think as Africans we should be proud of the music we are making; it is feel-good music and it’s the next breaking sound. I can see Afrobeats Record Labels that are going to come up in United States soon, if they haven ‘t already because that sound is really big. They play the Wizkid and Tem’s song every hour on the hour in New York City. So, it’s been accepted completely and fully,” he adds.

Highbridge the Label is an American record label founded by A Boogie wit da Hoodie, Don Q, Quincy “QD” Acheampong and Sambou “Bubba” Camara in 2016, based in New York City. 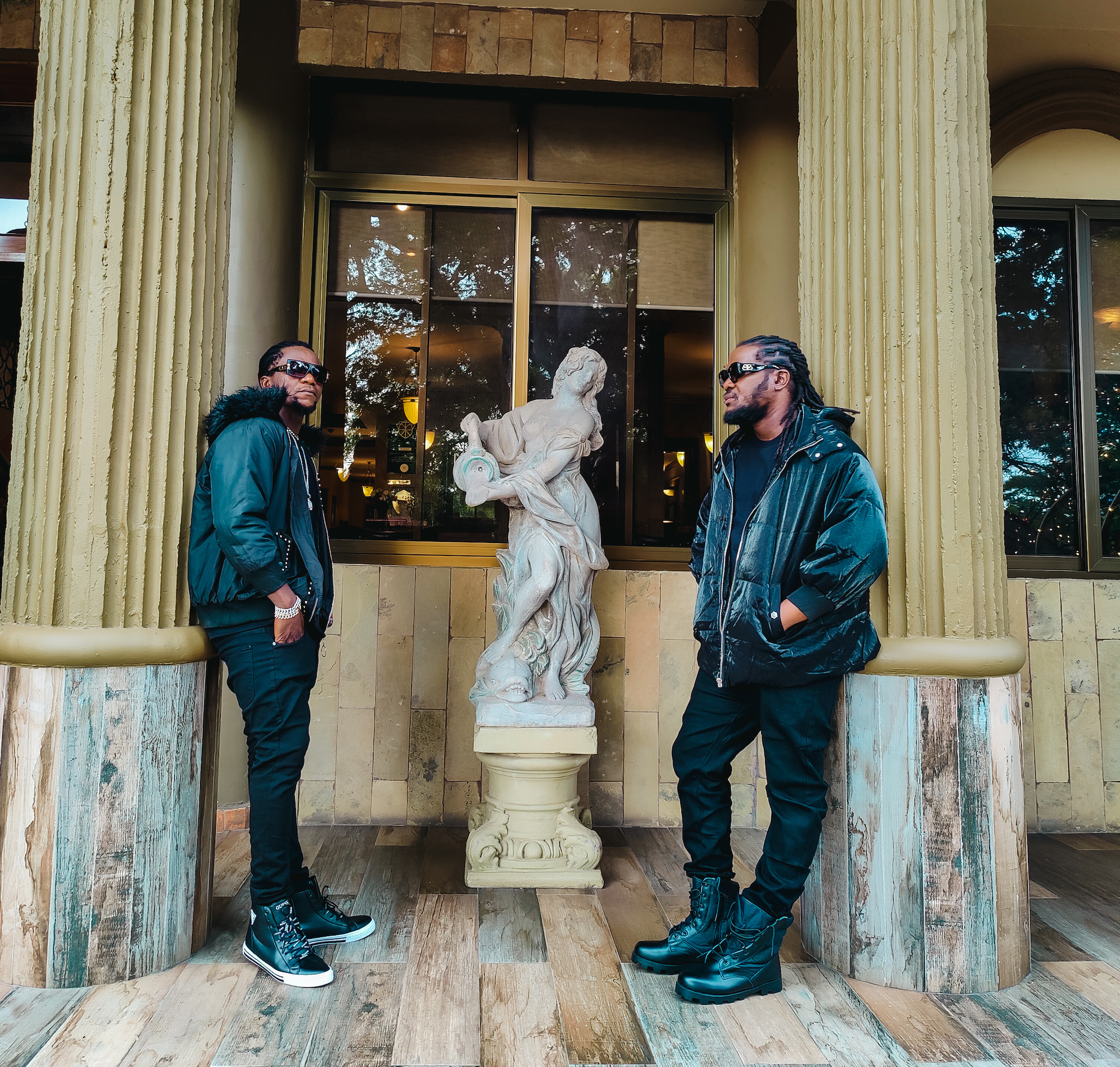 The mid-tempo laid-back vibe is an Afrobeat tune that is set to deliver it’s sonic ambiance throughout the entire room or outdoor space that is being played.

Featuring Fid Q, the tune is an attempt by the talent to expand his horizon and music appeal following the release of his initial hits such as Bigi Bigi, Show Body, among several others.

He has repeatedly been named the best hip-hop artist of all time in Tanzania and East Africa (by Felix Nyaumbu).

In commenting on his latest release, he stated, “The reason for this collaboration was to expand my career to other parts of the continent and the world at large.

It’s for the fans to know that we have something better to give the people for the Christmas and new year to make them happy and bring them fun”.

Get interactive with Oduma across his socials and stream now across all digital streaming platforms here – https://song.link/i/1601233440