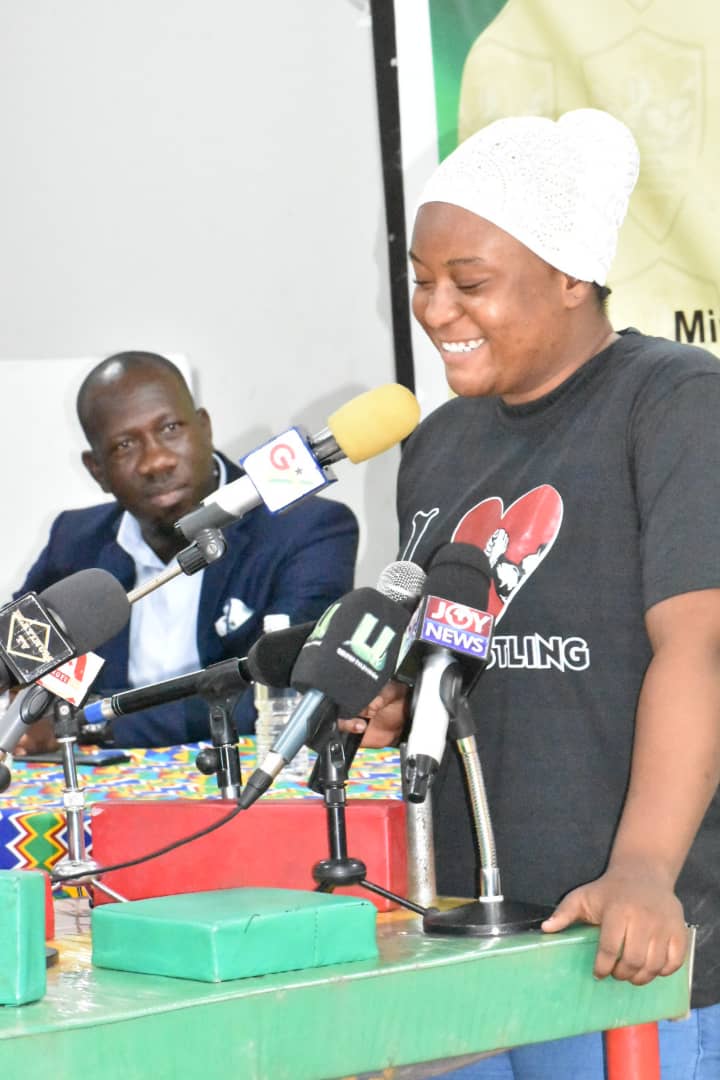 Yasmin, who is affectionately called “Hajia Vampire” has told the press in Accra and gone viral on social media to challenge officer Alberta in a war of words saying “I am only 16yrs and have been bullied enough by senior Alberta. Time to STOP her reign and be crowned Ghana’s Best Female Armwrestler. Its Go Hard or Go Home! I am the Queen in waiting”.

The young Armwrestler was introduced to the sport at age 14 and has become a tough contender in Africa winning 8 gold, 2 silver and 2 bronze medals at 2 African Championships. Yasmin weighs 86kg and comes into Friday’s Showdown aiming to be Ghana’s strongest.

Undefeated Alberta Boatemaa Ampomah aka Sexy Gayoyo on the other hand was decorated as Africa’s best female puller in 2017 and 2018 with 4 gold medals. She has swerved stiff competition from police compatriot Grace Minta, current African Champion to face the bukom lad known as Hajia Vampire.

Alberta comes into this battle as the favourite combining experience with skill and mental toughness. She will receive massive support from colleague police officers.

The attraction of the night will be the heavyweight Male battles where Antwi Boasiako the Punisher will face off with undefeated Derrick Kwakye aka Asoka Gh, Koffi Dabouku Anuoma from Togo and Lebanese Ghanaian Fawzi Saoud the King.
The latter, born in Ghana has gone personal already calling for a face-off with his bitterest rival the undefeated Derrick Kwakye, Asoka Gh. Fawzi Saoud had indicated he won’t mind loosing all battles and dethroning his rival.

Derrick Adu Kwakye who’s had one World and 2 Africa Championship experience is poised to stay undefeated though disadvantaged in weight. Named the Armwresler of the Year by the Sports Writers Association of Ghana (SWAG), Derrick who weighs 100kg will have to battle 114kg, 134kg and 127kg.

Heavyweight Antwi Boasiako the Punisher has vowed to retire with the Championship trophy on Friday.
In all, 19 pullers will be paraded on Friday at the Forecourt of Happy FM in Accra for the highly promoted Mcberry Armwrestling Showdown put together by the Ghana Armwrestling Federation, Legaci101 a sports markerting firm and Perception Management International.

The Armwrestling Showdown, sponsored by Mcberry Biscuits will be Live on ETV, GTV Sports+, Max TV, Angel TV and other partner TV stations.

Related Topics:arm wrestling
Up Next

This Sunday is “Popcorn Day” here’s how to get the most of the celebration!!!