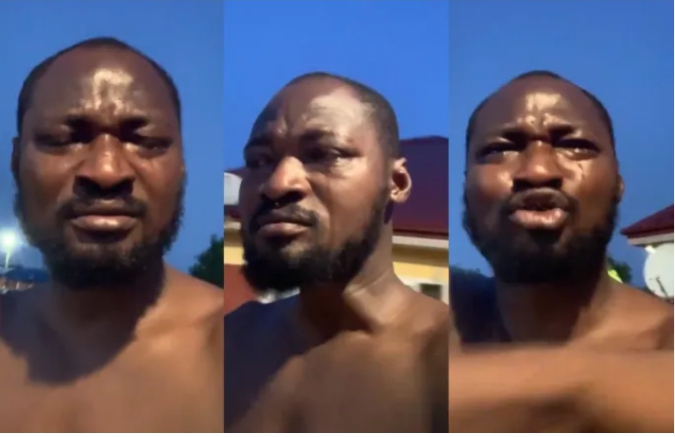 Ghanaians saw Benson Nana Yaw Oduro Boateng known popularly as Funny Face rise to fame and fail from grace in the most heartbreaking manner. The actor is finally speaking about the public struggles he has faced throughout his career.

In a new interview with Delay on her ‘DELAY SHOW’, Funny Face got candid about all his ordeals for the first time.

He described himself as an emotionally broken man when asked if he identifies as an abusive person for how he behaved towards some personalities and former partners on social media during his meltdowns.

“No, I am emotionally broken because you expect too much from people and if it doesn’t go your way, it gets you broken. The best way to make sure I fight it was to say things I didn’t mean to reduce the pain. That’s when depression sets in.”

He further stated that he wholeheartedly regrets all the nasty things he said about individuals on social media during his meltdowns. He blamed his actions on depression and suicidal thoughts.

“I have apologized publicly to a lot of people because it was a series of events. Now that the fog is lifted off my eyes and have sanity, I know that after going through the state where I was depressed, thought I would die, wanted to die, and nearly died, I have learned to not attach so much emotion to a particular person or thing.”

Funny Face took the opportunity to advise people who get emotionally attached to people or things.

“When that thing/person is no more there, it would affect you. In my case, I was so emotionally attached to my twin (Ella and Bella)” he said.

The ‘COW & CHICKEN’ firmly debunked rumors that his inappropriate actions were triggered by alcohol or substance abuse.

‘Social media is responsible for all of these problems’ – Justin Dean sues estranged wife, Korra Obidi

Ghanaian rapper, Kwaw Kese has reacted to the trending purported copy of a will of Kwadwo Owusu Afriyie, popularly known as Sir John. END_OF_DOCUMENT_TOKEN_TO_BE_REPLACED

Nigerian actress, Eucharia Anunobi, has revealed she urgently needs a man to settle down with. END_OF_DOCUMENT_TOKEN_TO_BE_REPLACED

General Manager of GhOne TV, Nana Aba Anamoah and Broadcaster, Serwaa Amihere have chided supporters of the New Patriotic Party (NPP) for defending the purported copy of a will of Kwadwo Owusu Afriyie, popularly known as Sir John. END_OF_DOCUMENT_TOKEN_TO_BE_REPLACED

Kourtney Kardashian and Travis Barker have got married – again. END_OF_DOCUMENT_TOKEN_TO_BE_REPLACED