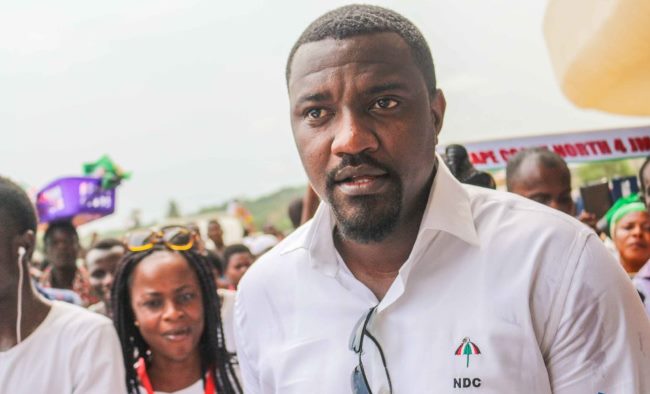 John-Dumelo-NDC[/caption] Ghanaian actor and farmer, John Dumelo, picked up forms yesterday to contest the parliamentary primaries of the National Democratic Congress (NDC). As expected, fans on social media expressed their views on the decision by the actor, they were also quick to ask John’s “best friend”, former UK High Commissioner to Ghana, Jon Benjamin if he was in support of the decision. The former UK High Commissioner replied and said that he was politically neutral but was willing to spray John’s presidential limo. “I have to remain politically neutral, I’m afraid, though I wish my friend, Mr Dumelo, very well. But when @johndumelo1 becomes President, I will personally spray paint his presidential limo any colour of his choice and for absolutely free”, he wrote.

https://twitter.com/JonBenjamin19/status/1075466646972698625
John Dumelo joined the 2016 parliamentary candidate for Ayawaso West Waguon constituency, Delali Kwasi Brempong to pick up nomination forms to contest in the by-election. https://ameyawdebrah.com/dont-worry-things-will-get-better-soon-john-dumelo-to-yvonne-nelson/ The nominations forms and filing fees were priced at GH¢1,000 and GH¢10,000 respectively, with a 50 per cent discount on the filing fees for women and persons with disability.
The NDC primary is expected to come off on Friday, 28 December, 2018. John Dumelo has for the past years been a strong supporter and member of the National Democratic Congress, and has publicly shown this in his activities on campaign platforms and social media. We wish the actor all the best!
]]>
Related Topics:
Up Next

Wendy Shay launches "Shay On You" album: Makes Gh 225,000 from auction sales of the album

Burna Boy has revealed in an interview that American R & B star Toni Braxton gets 60% of the royalties of his last single ‘Last Last.’ Burna Boy made this revelation when answering questions of how the single came about while appearing on a podcast. END_OF_DOCUMENT_TOKEN_TO_BE_REPLACED

Ghana have been banned from competing in the next two editions of the FIFA U17 Women’s African Qualifiers and fined $100,000 by the Confederation of African Football. END_OF_DOCUMENT_TOKEN_TO_BE_REPLACED

Although the music industry in Ghana is heavily dominated by males, there are a few young women, pulling their weight, and rubbing shoulders with their male counterparts. END_OF_DOCUMENT_TOKEN_TO_BE_REPLACED

Chris Fonye popularly known as “Hydraulix Fonye” is a Ghanaian producer, sound engineer, songwriter and singer with a vast experience in the Ghanaian entertainment industry. END_OF_DOCUMENT_TOKEN_TO_BE_REPLACED

Although there may be hundreds of afro-beats artists in the country, Highly Spiritual Music signee, Lasmid believes he is unique. END_OF_DOCUMENT_TOKEN_TO_BE_REPLACED