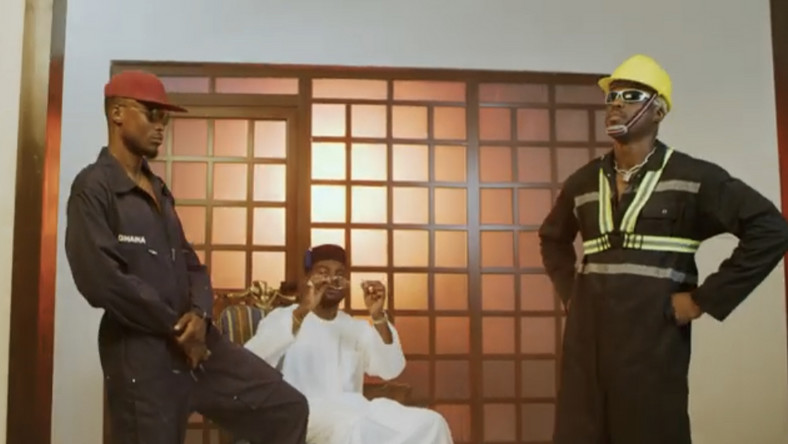 Rapper, E.L is currently promoting his latest single, titled ‘Ehua’. He was on Ameyaw TV recently to talk about the single, which describes as his favourite song at the moment.

“It has a funny video and I love humour.  I also had the opportunity to do the song with two of my favoruite artists, Joey B and Falz from Nigeria.  Falz is amazing; he is incredibly talented. He knows exactly what is looking for and knows the direction he is going. He is an amazing artist and even lyricist too, and generally and amazing person,” the rapper said.

E.L also exlusively revealed how ‘Ehua’ came about on Ameyaw TV.  He said:

“Ehua is a song that I made the beat, and I wasn’t really going to record it because it was just one of those beats, but Joey B brought the idea out. While vibing with Joey B in the studio, he came up with the chorus and I was like ‘this is hot, this actually nice’.  I met with Falz at his apartment in Accra and we were going through some beats and I played that one. He was ‘yo what is that?’ and I was like  ‘yeah!’.

Most of the beef we have are lyricism beef and not proper rap beef – E.L

“The rest is basically history. I’m going to release very soon how the whole process came about, how we got the lyrics down and everything. The video was by Yaw Skyface. We actually came up with the concept together with Falz and just put it together, the following week we just shot the video”

E.L also revealed that he has a track with Sarkodie and that although many people assume the two are not cool, that is untrue.  “We have a track, I am just trying to figure out what would be the best time to release it.”

Most of the beef we have are lyricism beef and not proper rap beef – E.L
AshMikky Records sets to release a maiden single of DonMikky
Advertisement