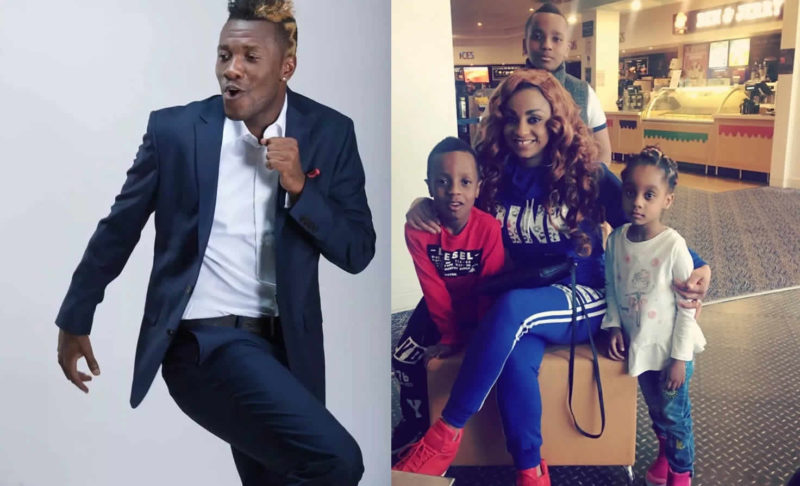 Ghanaian football star, Asamoah Gyan, who has been in the centre of rumours of divorce and infidelity has hinted that he is unbreakable by what is going on currently in his life. After scoring a goal for his team on Tuesday, the footballer posted a video on twitter saying: “This guy has said it over and over again that nothing breaks him down. Keep planning to lock him at the front door. He will definitely pass through the back door.” https://twitter.com/ASAMOAH_GYAN3/status/1057716677658505224 Meanwhile according to reports online, Asamoah Gyan And His Family Want To Destroy Gifty’s Life, She Never Cheated On Him And He Rather Has Another Child With A Woman In Italy. Read an email that was sent to to Gistmania.com below: There are lot of stories going around about this Gyan brouhaha so let me give you a backdrop of what is actually happening here. As most people know, Gifty has been with Asamoah Gyan for years, way before he became popular and she has been through a lot aside from the cheating scandals that were exposed in the media. Between Baffour, his wife Naana, and their sister in London, Gifty was never liked. Not sure what Naana’s reasons were but their sister started out being supportive until it got to a point where Gifty got tired of giving her money. That’s another thing. Gyan is very stingy and selfish. The only time he doesn’t have a problem taking out money is when it’s going to his brother Baffour. When it comes to the other family members, including their other brother, it is a struggle; they have to beg for it. That aside, Gyan and Gifty had a baby around the time he became a professional, a pregnancy he had initially wanted her to abort by the way. Of course she refused and for a long time after their son was born, Gyan refused to care for her and their son. She had to go to his mother to get money to care for their son. When she attempted to leave because she couldn’t do it anymore, he refused to let her go and they had their second son shortly after the reconciliation. https://ameyawdebrah.com/asamoah-gyan-files-for-divorce-after-5-years-demands-a-dna-test-to-prove-hes-the-father-of-his-3-kids/ Gyan never wanted to marry Gifty, it was as if he kept her around because they have kids together, some kind of control thing if you ask me. It wasn’t until his mom passed that he married her and this was only because that was his dead mother’s wish. He started taking care of her after she became his wife and that increased the jealousy and envy against her by the people mentioned above. At the time Gifty and Gyan were dating when he was playing in Italy, he had another girlfriend in Italy with whom he has a child. His marriage to Gifty was made a secret because of this Italian girl. Anyway, fast forward to this year. The Italian lady had heard that Gyan bought a house for Gifty in London and was about to transfer her a huge amount of money which of course didn’t sit well with her because Gyan is refusing to care for her and her son as well, because he doesn’t think that’s his child. Yes, he’s planning for a DNA test for that too. It is no secret to some of us that this baby mama has been planning to “destroy” Gifty for a while now. She was advised against it but of course that fell on deaf ears because she thought after Gyan left Gifty he’ll come to her since they have a kid together. Well, the baby mama along with their other brother’s baby mama who have both been jilted mind you, came up with a story that Gifty was previously married which made no sense since Gyan and Gifty have been together for a long time. Anyway, Gyan upon hearing this, decided to trick Gifty who was living in London, to come to Ghana with the assertion of signing some documents to a business she was in charge of. Upon arrival in Ghana, those illiterate boys who work with the Gyans, picked Gifty up from the airport and drove her to some hotel where Baffour Gyan took her passport so she couldn’t go back to London. Apparently, they had planned some other things to do to her but someone got wind and told her so she left that hotel and went into hiding. Gyan made a special trip to Ghana himself to look for Gifty so he can serve her divorce papers. This madness has been going on all summer and it is no secret that Gyan only wants to tarnish Gifty’s image obviously for selfish reasons. This has been a spiral of backlash for the baby mama as Gyan still refuses to give her money for their “son” together. Gifty has never cheated on Gyan as his camp wants us to believe. What I never understood was why he married her in the first place when she wanted to leave? Even if it is his mother’s wish, he shouldn’t have married a woman he didn’t care for. They have no respect for their dad so nothing he says matters. They even wished his death rather than their mom. yes, you read right. Gyan is going down a destructive spiral and I know some people have attempted to advise him but he refuses to listen because well, he’s rich. The only person he listens to is his older brother Baffour who is up to no good. Unfortunately, they don’t care whose lives they destroy, they do whatever they want and like I always say, only in Ghana because they bribe the officials to get away with the things they do. They will lose everything if this divorce had been in the UK or US, but unfortunately, this is Ghana.]]>

TV3 is not only best in new and entertainment, but best in rewarding its staff too. END_OF_DOCUMENT_TOKEN_TO_BE_REPLACED

The Ave Maria School has launched its 40th-anniversary celebration by urging school leaders to provide better opportunities and platforms for interaction with students in order to guide them in their education. END_OF_DOCUMENT_TOKEN_TO_BE_REPLACED