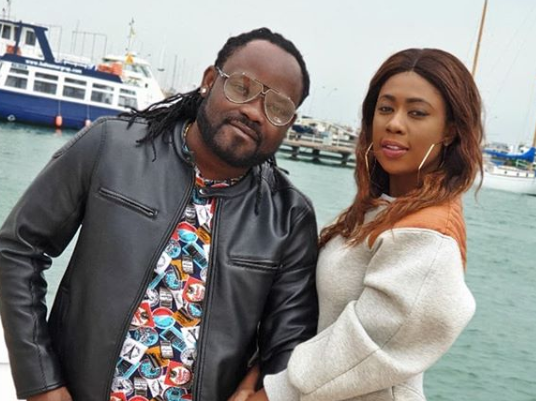 The singer who’s married to ex-Big Brother Africa housemate Selly Galley, said he is his wife’s biggest fan when it comes to her fashion sense. He added that Africans are too conservative and traditional when it comes to fashion, then said that marriage should not stop one from doing things they feel comfortable doing.

He said that most men are hypocritical when dealing with their women and the way they dress.

“Some of the men are very hypocritical about stuff like these. He’ll say cover yourself, wear long skirts, wear ones that are below the knee but when we go out we’ll be spying the girls wearing the mini skirts and all.”

He added that a little skin doesn’t hurt as far as it’s not too exposing.

“Of course if it comes too up then it becomes someway,” he said. “But a little skin doesn’t hurt and I love it. I’m actually one of her biggest fan when it comes to her fashion sense she’s doing amazing and there’s a lot that’s coming up from her camp as well. Watch out.” Big said.

Nigerian hip-hop artiste, Eedris Abdulkareem has disclosed that he is battling kidney failure and will have a surgical operation at the end of July. END_OF_DOCUMENT_TOKEN_TO_BE_REPLACED

According to reports from Nigeria, unidentified gunmen have attacked an ‘advance team’ of President Buhari’s presidential aides leading to injuries to two people. END_OF_DOCUMENT_TOKEN_TO_BE_REPLACED

Sensational highlife/afrobeat artist KiDi has said that his dream is to collaborate with Daddy Lumba on a song. END_OF_DOCUMENT_TOKEN_TO_BE_REPLACED

Award winning South African actor, Sthembiso ‘SK’ Khoza has once again become a trending topic on social media after a snippet from his sex tape – which shows him performing oral sex on an unknown woman – went viral. END_OF_DOCUMENT_TOKEN_TO_BE_REPLACED

It is no secret that “HipLife” Grandpapa, Reggie Rockstone is the pioneer of the genre in Ghana. END_OF_DOCUMENT_TOKEN_TO_BE_REPLACED