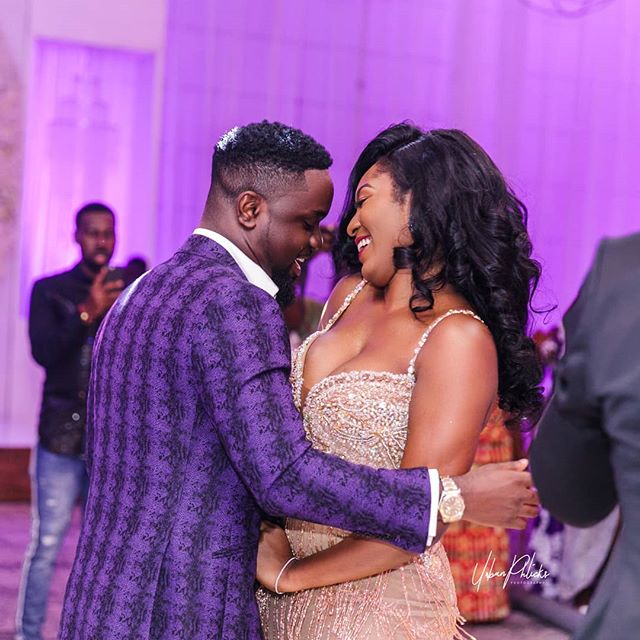 B.E.T award-winning Ghanaian rapper, Sarkodie has shared new details about his attraction to his wife, Tracy.

The “No Pressure” rapper, in a recent appearance on the ‘Podcast and Chill with MACG’ in South Africa revealed that he stuck with Tracy because he didn’t have a reason not to.

‘The reason why I knew it was her was because I didn’t have a reason,” he stated.

According to him, although he, just like any other man has preference when it comes to the physical appearance of women, his attraction to his wife was purely on a deeper level.

“And till today, I keep telling her I have my spec, which is physical  and every guy has a spec but it wasn’t that about her, you don’t know why, you just want to know the person,” he added.

Sarkodie also revealed that before they finally reconnected and gave love a chance, they both lived their separate lives on different continents.

“For along time, she went to Germany to live her whole life, she lived her life and I lived mine and she was back we reconnected and I had the biggest heartbreak around the same time and I was really into the music trying to get the music go off,” he shared.

Narrating how they finally got their relationship going, Sarkodie stated;

“I was coming from the studio and I heard she was back in town and she was hanging out with the guys, these guys everybody wanted to get to her so anything she said even if it wasn’t funny they were laughing for no reason and I came as a hustler and she was like that’s Michael you look grown and I flipped, I was mad and I was like are you my age mate? do you know how old I am for you to say that. I was mad, you know when you are starving everything sounds like an insult. She was shocked because she did not think what she said warranted that response and that’s what got her.Funny enough, that’s what got her.  She tried to apologise and the apology is what you guys are now seeing.”

Sarkodie and Tracy have been through thick and thin. Although they have been together for a very long time, they finally got hitched, officially, in July, 2018.

Their union has been blessed with two beautiful children, a girl, Titi and a boy, MJ.

I want to perform ‘Buga’ at the world cup – Kizz Daniel

Ghanaian rapper, Okyeame Kwame has opined that the new crop of rappers in the industry are far “better” than him and others who have been in the game for two decades. END_OF_DOCUMENT_TOKEN_TO_BE_REPLACED

Ghanaian rapper, Sarkodie may be gearing up to speak against the governance of the nation by the ruling New Patriotic Party (NPP). END_OF_DOCUMENT_TOKEN_TO_BE_REPLACED

Ghana’s social media has been buzzing after a video showing a young  Ghanaian in police escort to go and buy a burger went viral! END_OF_DOCUMENT_TOKEN_TO_BE_REPLACED

Broadcast Journalist at Metro TV, Bridget Otoo has come after employers who fail to pay their workers, yet live lavishly. END_OF_DOCUMENT_TOKEN_TO_BE_REPLACED