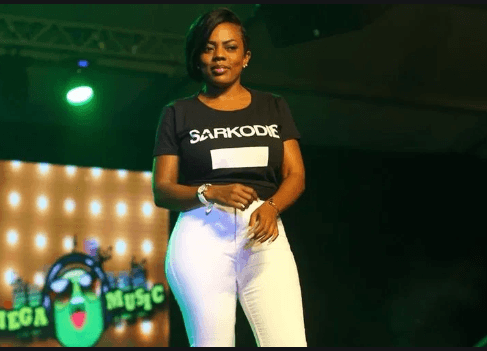 It is no secret that General Manager of GhOne TV, Nana Aba Anamoah is rapper Sarkdoie’s biggest fan.

The award-winning broadcaster has on several platforms declared her love and admiration for the rapper. She is also recognised as a bonafide member of “SarkNatives,” Sarkodie’s fan group.

In a recent interview with Nana Ashorkor on Asaase Radio, Nana Aba reiterated her admiration for the rapper.

“Sark all day all night. The thing about my love for Sark, it goes beyond music. I have a lot of respect and admiration for him. I think he’s done so well for himself, he’s so focused. You don’t see Sark just around any place,” she told host Naa Ashorkor.

Ms Anamoah ended by categorising Sarkodie as the greatest rapper in Africa.

“Sark is the greatest rapper in Africa, you may disagree but that’s your problem but Sark over anybody,” she ended.

Burna Boy has revealed in an interview that American R & B star Toni Braxton gets 60% of the royalties of his last single ‘Last Last.’ Burna Boy made this revelation when answering questions of how the single came about while appearing on a podcast. END_OF_DOCUMENT_TOKEN_TO_BE_REPLACED

Ghana have been banned from competing in the next two editions of the FIFA U17 Women’s African Qualifiers and fined $100,000 by the Confederation of African Football. END_OF_DOCUMENT_TOKEN_TO_BE_REPLACED

Although the music industry in Ghana is heavily dominated by males, there are a few young women, pulling their weight, and rubbing shoulders with their male counterparts. END_OF_DOCUMENT_TOKEN_TO_BE_REPLACED

Chris Fonye popularly known as “Hydraulix Fonye” is a Ghanaian producer, sound engineer, songwriter and singer with a vast experience in the Ghanaian entertainment industry. END_OF_DOCUMENT_TOKEN_TO_BE_REPLACED

Although there may be hundreds of afro-beats artists in the country, Highly Spiritual Music signee, Lasmid believes he is unique. END_OF_DOCUMENT_TOKEN_TO_BE_REPLACED