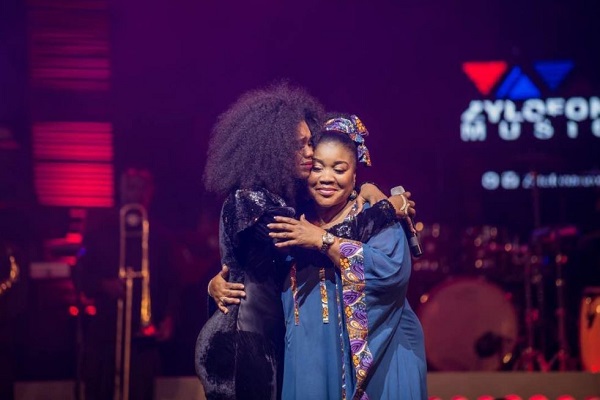 Singer Becca made headlines these past few days after her mum, Madam Yiadom-Oti granted an interview claiming that Becca’s husband, Tobi Daniels was a thief and had branded her a witch.

According to her, she was sidelined and claims she hasn’t spoken to Becca for close to a year now. Madam Yiadom-Oti insinuated that Tobi is a thief, who is warding her off, so he would have a chance to manage the wealth of Becca.

Becca’s father however released a press statement to apologise to Ghanaians and stated that the allegations by Becca’s mum were false.

One would think that Becca will hold a grudge against her mother for her behaviour. However, in an interview with Andy Dosty on Hitz FM this morning, an almost teary Becca stated that despite everything, she still loves her mum dearly.

“…the woman in question is my mother and I will never under any circumstance sit on any platform to talk about my mother. I love my mum so much. Anybody that knows me knows that I would love someone who is not even my mother and so I love her so much. I don’t think it’s even appropriate to even have a discussion about her on any platform. I would like everybody to respect her at this time. and this is a family matter and it will be solved at home,” she told Andy.

Ghanaian music stars are in the battle for both continental and regional awards in the newly released All Africa Music Awards (AFRIMA) nomination list. END_OF_DOCUMENT_TOKEN_TO_BE_REPLACED

Popular Kumawood actor and vlogger, Kwaku Manu has finally confirmed that his marriage has hit the rocks. END_OF_DOCUMENT_TOKEN_TO_BE_REPLACED

The ever-prestigious Humanitarian Awards Ghana lived up to its billing and hype with attendance from high-profile personalities in government, leadership, entertainment, and philanthropy. END_OF_DOCUMENT_TOKEN_TO_BE_REPLACED

After years of speculation, Fugees have announced that they’re set to reunite for a 2021 world tour. END_OF_DOCUMENT_TOKEN_TO_BE_REPLACED

One of the most successful Kumawood actresses in Ghana, Mercy Aseidu has opened up about her motivation to keep making Ghanaian film content although the industry is stagnant.  END_OF_DOCUMENT_TOKEN_TO_BE_REPLACED