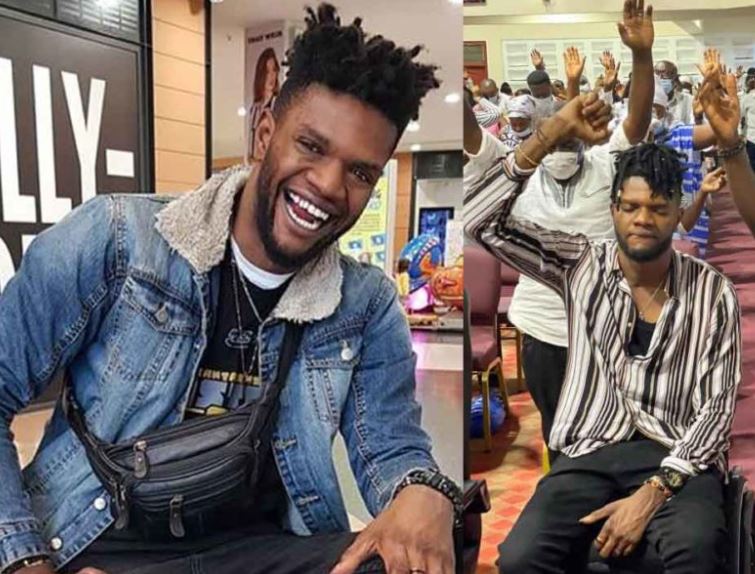 The termination of the contract was as a result of misunderstanding between the two.

Later, Ogidi Brown alleged according to the agreement of the contract with Fameye, the latter incurred a debt of $50,000 he was supposed to pay to his record label, after the contract termination.

According to Ogidi Brown, Fameye made no effort to settle the debt, so, he threatened to curse him and summon him before river-gods.

After the threat, which was some few days before new year’s eve, Ogidi Brown was seen in church on new year’s eve worshiping and praising God.

People lashed and criticized him for going to church after he threatened to curse Fameye and summon him before river-gods.

But Ogidi Brown in an interview with on-air personality, Deloris Frimpong Manso (Delay) on her Delay show, revealed his motive for having been seen in church on the new year’s eve, when Delay questioned why he still went to church after threatening to curse a fellow musician.

According to Ogidi Brown, he felt remorseful after making a video of himself threatening to curse Fameye. Hence the decision to go to church and ask God for forgiveness on new year’s eve.

“Could you believe I don’t even know how to curse a fellow brother….I only threatened because he’d refused to pay me. I went to church on the 31st night of December to ask God for forgiveness,” he said.

Ogidi Brown threatens to curse Fameye over $50,000 he owes him

Ghanaian actress, Bisa Gbekle has revealed that it’s not all rosy when going under the knife to get your body enhanced. END_OF_DOCUMENT_TOKEN_TO_BE_REPLACED

Ghanaian actress, Bisa Gbekle became the talk of town over the past few weeks after she flew all the way to Turkey to undergo body enhancing surgery. END_OF_DOCUMENT_TOKEN_TO_BE_REPLACED

Ghanaian actress, Bisa Gbekle became the talk of town over the past few weeks after she flew all the way to Turkey to undergo body enhancing surgery. END_OF_DOCUMENT_TOKEN_TO_BE_REPLACED

Ghanaian actress, Yvonne Nelson, has come to the defence of veteran actor, Psalm Ajetefio (TT), over his “plead for leftovers” scandal that has hit the country over the past couple of days. END_OF_DOCUMENT_TOKEN_TO_BE_REPLACED

Despite public opinion that actress Yvonne Nelson has gone silent on the current ruling party, the New Patriotic Party (NPP), she begs to differ. END_OF_DOCUMENT_TOKEN_TO_BE_REPLACED