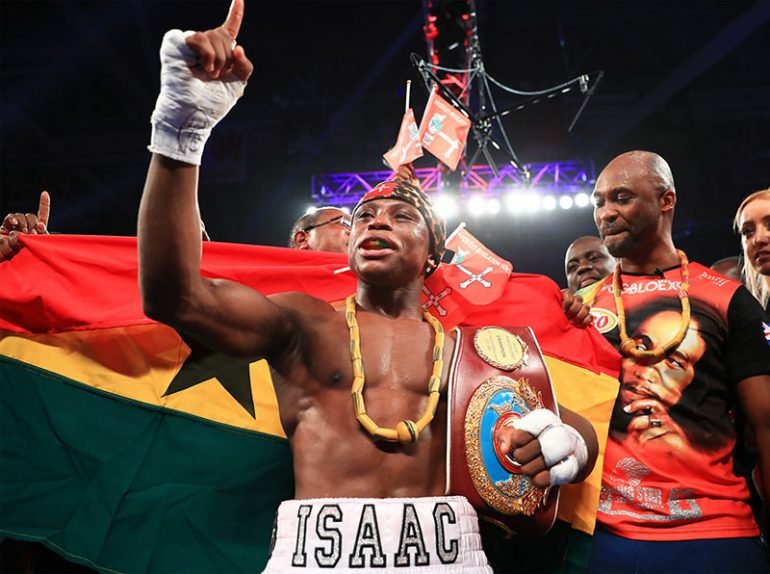 Earlier today, a news report by TV3, claimed the 27-year-old boxer had announced his nationality switch during a press conference in Accra.

However, the management team of Dogbe, RISING STAR AFRICA PROMOTION has issued a press statement debunking the news reports.

“It has come to the attention of Team Dogboe that a news item is peddling falsehood as
to Isaac Dogboe’s nationality.
He has and will always fight for Ghana and has not issued any communication or
granted any interview on a nationality switch. Kindly disregard any such information.
Let’s all rally behind him as the North American Boxing Federation (NABF) Champion
to clinch the number 1 title contender position come Saturday 23rd July, 2022 at the
Grand Casino Hinckley, Minnesota, USA for the motherland.”

Gonzalez’s WBO International belt will be on the line, while the winner is likely to have a title shot against Emanuel Navarrete.

Dogboe has fought under the Ghanaian flag since breaking out as a professional, although he holds both Ghanaian and British citizenship.
See the press statement below: Related Topics:Isaac Dogboe
Up Next

Burna Boy has revealed in an interview that American R & B star Toni Braxton gets 60% of the royalties of his last single ‘Last Last.’ Burna Boy made this revelation when answering questions of how the single came about while appearing on a podcast. END_OF_DOCUMENT_TOKEN_TO_BE_REPLACED

Ghana have been banned from competing in the next two editions of the FIFA U17 Women’s African Qualifiers and fined $100,000 by the Confederation of African Football. END_OF_DOCUMENT_TOKEN_TO_BE_REPLACED

Although the music industry in Ghana is heavily dominated by males, there are a few young women, pulling their weight, and rubbing shoulders with their male counterparts. END_OF_DOCUMENT_TOKEN_TO_BE_REPLACED

Chris Fonye popularly known as “Hydraulix Fonye” is a Ghanaian producer, sound engineer, songwriter and singer with a vast experience in the Ghanaian entertainment industry. END_OF_DOCUMENT_TOKEN_TO_BE_REPLACED

Although there may be hundreds of afro-beats artists in the country, Highly Spiritual Music signee, Lasmid believes he is unique. END_OF_DOCUMENT_TOKEN_TO_BE_REPLACED