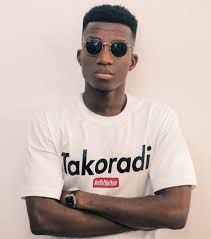 Ghanaian highlife singer, Kofi Kinaata has stated that but for the coronavirus pandemic, he deserves to win “Artiste of the Year” and “Most Popular Song of the year” at the 2020 Vodafone Ghana Music Awards.

According to the “Things Fall Apart” hitmaker, the year under review, 2019, was a good year for him, hence he deserves to be crowned as such.

Kofi Kinaata was speaking in an interview with Amansan Krakye on Radio Central in Cape Coast when he made this assertion.

“As for 2019, hands down without sounding arrogant I am by far the artiste of the year and I’m not saying 2020. I did more than any artiste in that year with hit songs, several ambassadorial deals, numerous shows that I performed and on top of all I was adjudged the most influential youth.

When asked by the host if his ‘Things Fall Apart’ song could compete with Sarkodie’s anthem ‘Oofeetso’ he said:

“Oofeetso is a good song and I really respect my senior colleague Sarkodie. But when we say most popular song then it means that song crossed boundaries which I believe my song ‘Things fall apart’ stands tall”

“That’s the horizon that ‘things fall apart’ attained, it was everywhere and that’s what we call most popular song” he added.

The 21st Vodafone Ghana Music Awards which was slated for Saturday, May 2nd, 2020 at the Grand Arena, AICC, has been brought to a halt due to the coronavirus pandemic.

From Ghana to Global Superstars: The Dancing pallbearers from Prampram

Ghanaian Reggae/Dancehall artist, Stonebwoy has shared his thoughts on Meek Mill filming at the Jubilee House for a music video which went viral recently. END_OF_DOCUMENT_TOKEN_TO_BE_REPLACED

Ghanaian Reggae/Dancehall artist, Stonebwoy has explained why he thinks Nigerian artists are taking the lead in the African music industry. END_OF_DOCUMENT_TOKEN_TO_BE_REPLACED

Ghanaian highlife legend, Kwabena Kwabena has disclosed the reason why he has been single for some time. END_OF_DOCUMENT_TOKEN_TO_BE_REPLACED

Ghanaian reggae-dancehall singer and broadcaster, Blakk Rasta has blamed the late Bob Marley’s family for putting on a rapper like Sarkodie on the “Stir It Up” remake. END_OF_DOCUMENT_TOKEN_TO_BE_REPLACED