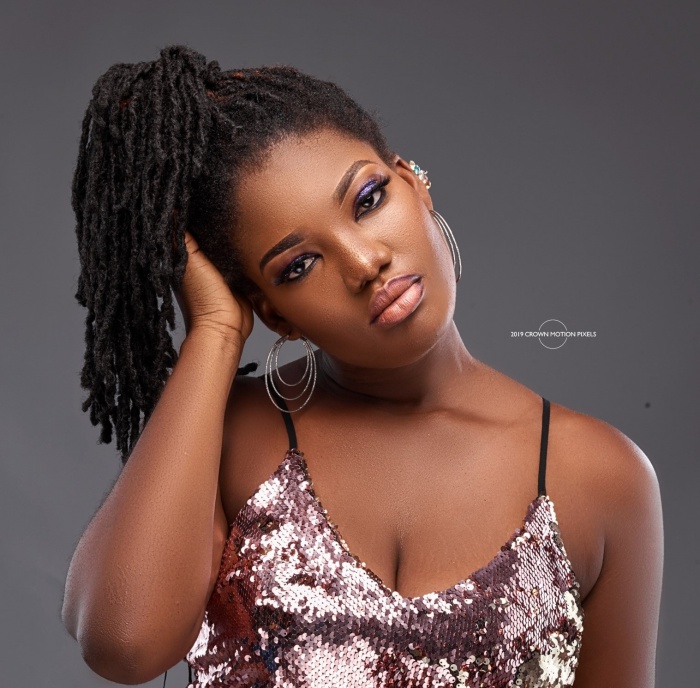 Over the years,the music industry in the country have been flooded by men leaving their female counterparts little or no space to shine.
However, the likes of Akosua Agyapong, Becca, Efyah(just to mention a few) have done fairly well in this terrain, creating a path for other female musicians to follow.
One of such Musicians treading this path is Iona, a young Ghanaian musician who is set to take the music scene by storm.
The youngster whose real name is Abena Onuawonto Sam, hails from Anomabo in the central region and is a midwifery student at the University of Health and Allied Sciences in Ho.
Iona officially has two songs to her credit, ie; Penetrate released on 16th February 2019 and Krife ft Famous which is yet to be officially released.
Both songs were produced by Kasoa based producer Big Brain and comes with a video each.
Music came to Iona at her early teen age during her secondary school days at  Action senior high school at Madina. She joined the school choir and won the hearts of many including teachers.
Iona was also a member of the choir at the Hohoe Midwifery school, where she earned her diploma in midwifery before enrolling at the University of Health and Allied Sciences, Ho to further her midwifery course.
The youngster’s music is mostly inspired by happenings around her including social issues, spiritual and relationship issues.
She looks up to the likes of Efyah, Becca, Adina, Samini, Stonebwoy, Shatta Wale, Sarkodie, Beyonce, Missy Elliot and Kelly Rowland.
Aside motivating people through her music, Iona is bent on contributing her quota towards reducing the rate of maternal mortality in Ghana.
During her leisure time, Iona likes reading, watching movies and Cooking.
Iona is signed onto Funkz Entertainment whose CEO is Eugene Agyeman, a Ghanaian business man based in the U.K.
Kindly follow Iona on social media;
•Twitter & Instagram; Iona Muzik
•Facebook; Iona Gh
•YouTube; Iona Gh
You may check out;
Iona – Penetrate (Prod. by Big Brain)
https://standoutentgh.com/2019/04/30/new-jam-iona-penetrate-prod-by-big-brain/
Iona ft Famous – Krife (Prod. by Big Brain)
https://standoutentgh.com/2019/04/30/new-jam-iona-penetrate-prod-by-big-brain/
Related Topics:
Up Next

Oil and Gas mogul, Kevin Okyere talks philanthropy on the Steve Harvey Show after previously donating $10,000 on the show