A middle aged man, described as an intruder, has reportedly been attacked, injured and killed by lions in the Accra Zoo, a press statement from the Forestry Commission reads.

According to the statement, the incident happened at the Accra Zoo premises at around midday on Sunday, August 28.

The man had reportedly jumped the fence, entered the lions enclosure in the zoo and got himself injured by one of the lions in the process.

He has since been conveyed to the morgue after dying from the sustained injuries.

The zoo authorities have since successfully coaxed the lions into a secure hold and
invited the Achimota Police to convey the body and commence investigations. 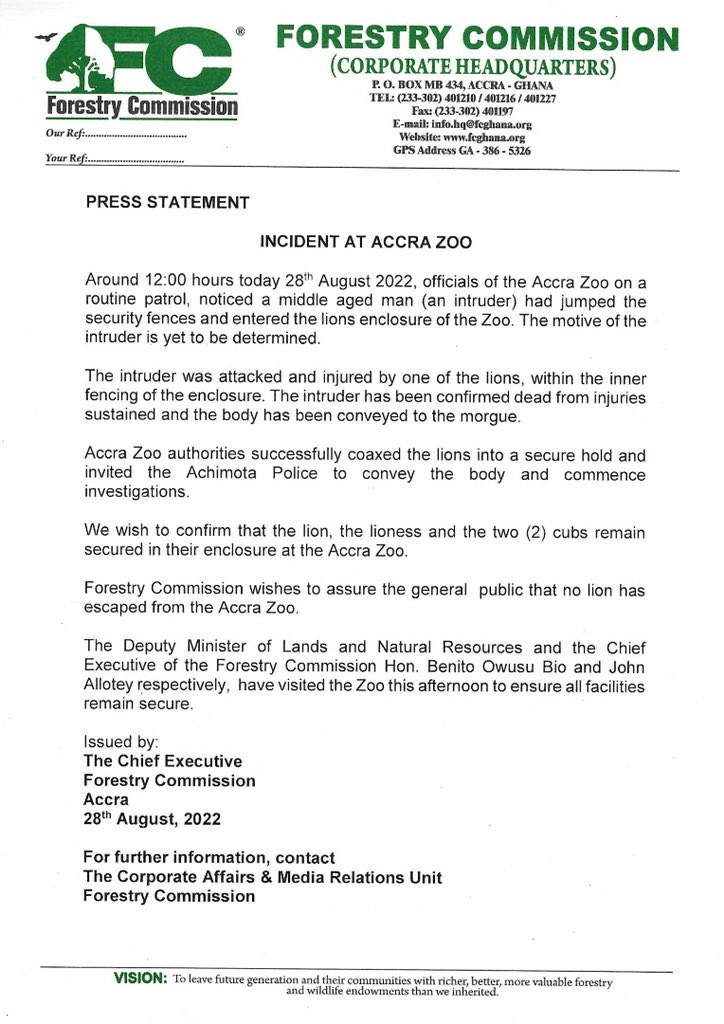 Aya RamzyB Beats Fameye, Keche, DopeNation, Ayesem To Win Artiste Of The Year At The WMAs

What a time to be an African! On the back of a successful Global Citizen Festival in Accra, and a visit of  Recording Academy CEO, Harvey Mason Jr to Ghana, his first trip to West Africa, it appears that Afrobeats may soon get its individual shine at the Grammys! END_OF_DOCUMENT_TOKEN_TO_BE_REPLACED

The School of Graduate Studies of the University of Professional Studies (UPSA) has honoured Ghanaian musician, Rebecca Acheampong known popularly as Becca for her outstanding academic achievements. END_OF_DOCUMENT_TOKEN_TO_BE_REPLACED

Platinum selling artist, KiDi has reacted to the resurfacing of his old tweets on the social media platform. END_OF_DOCUMENT_TOKEN_TO_BE_REPLACED