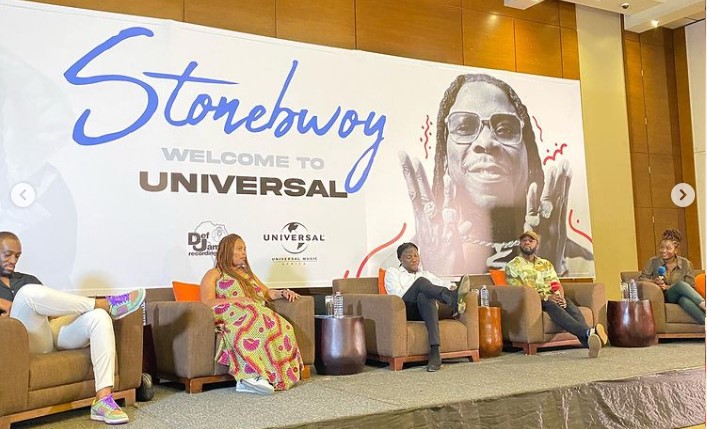 According to Ghanaian dancehall musician Stonebwoy, it took 5 years for his partnership with Universal Music Group (UMG) to materialize.

Addressing the media at the event, Stonebwoy explained how discussions for the partnership started back in 2017 and had been carefully worked on for 5 years before its announcement.

He said: “We have been working on this thing since 2017 so it took us 5 years to get here finally. It is a big deal for us all to support”

In a press release issued on May 3rd to announce the signing, UMG CEO for South Africa and sub-Saharan Africa Sipho Dlamini described Stonebwoy as “a true African talent” who “works to lift the heart and spirit of those around him while producing fresh sounds that keep blowing the world away. We look forward to what 2022 has in store for him.”

“I’m excited to welcome Stonebwoy to the Def Jam Family in partnership with Sipho and 0207,” Def Jam chairman and CEO Tunji Balogun said.

“The Def Jam brand is recognized all over the world as a stamp of excellence in black music, and as we continue to strengthen our musical bond in important markets like Africa and the UK, it’s dynamic, talented artists like Stonebwoy that will lead the way,” he added.

Michy leaves fans surprised as she reveals pregnancy on her birthday

Viola Davis makes a stunning transformation in the new trailer for ‘The Woman King’, in which she plays Nanisca, leader of the all-female warriors known as the Agojie. END_OF_DOCUMENT_TOKEN_TO_BE_REPLACED

African-American businessman and jet broker Kelvin Mensah, popularly known as PJKev has added his voice to the many people against the building of the National Cathedral. END_OF_DOCUMENT_TOKEN_TO_BE_REPLACED

Nigerian hip-hop artiste, Eedris Abdulkareem has disclosed that he is battling kidney failure and will have a surgical operation at the end of July. END_OF_DOCUMENT_TOKEN_TO_BE_REPLACED

According to reports from Nigeria, unidentified gunmen have attacked an ‘advance team’ of President Buhari’s presidential aides leading to injuries to two people. END_OF_DOCUMENT_TOKEN_TO_BE_REPLACED

Sensational highlife/afrobeat artist KiDi has said that his dream is to collaborate with Daddy Lumba on a song. END_OF_DOCUMENT_TOKEN_TO_BE_REPLACED