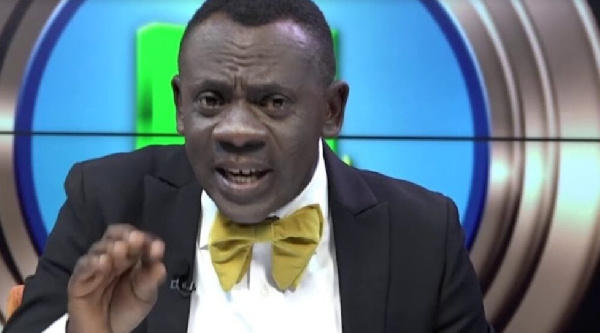 Popular Kumawood actor, Akwasi Boadi also known as Akrobeto had revealed that since stepping foot into Accra some forty three years ago, he has never paid rent.

According to the award-winning Television Presenter, his humility has given him a lot of opportunities that he would have never dreamed off, coming from a very poor background.

Read also: Intruder killed by lions in the Accra Zoo

Akrobeto in an interview on Precise FM narrated his journey to Accra and revealed that he was brought to the city by Apostle Kwadwo Sarfo.

”I’ve lived in Accra for 43 years now, no rent. The secret is from my father Apostle Kwadwo Safo,” he said in the interview.

Akrobeto reveals that he lived with the poplar engineer for a very long time and he never asked for anything in return.

He also shared that even after moving out of Apostle Safo’s house years later to live on his own, his landlords never took a dime from him as rent.

“I didn’t have anything of my own. My family was very poor. When I completed Form 4 in the year 1979, Apostle Kwadwo Sarfo sent someone to come for me from my village to stay with him in Accra. And I stayed with him for a very long time without paying a dime because of my humility and honesty. Even in times when I moved out, anytime, I pay rent, strangely, the landlords either return my money or refuse to accept it,” he stated.

Watch snippet of interview below;

Intruder killed by lions in the Accra Zoo

What a time to be an African! On the back of a successful Global Citizen Festival in Accra, and a visit of  Recording Academy CEO, Harvey Mason Jr to Ghana, his first trip to West Africa, it appears that Afrobeats may soon get its individual shine at the Grammys! END_OF_DOCUMENT_TOKEN_TO_BE_REPLACED

The School of Graduate Studies of the University of Professional Studies (UPSA) has honoured Ghanaian musician, Rebecca Acheampong known popularly as Becca for her outstanding academic achievements. END_OF_DOCUMENT_TOKEN_TO_BE_REPLACED

Platinum selling artist, KiDi has reacted to the resurfacing of his old tweets on the social media platform. END_OF_DOCUMENT_TOKEN_TO_BE_REPLACED