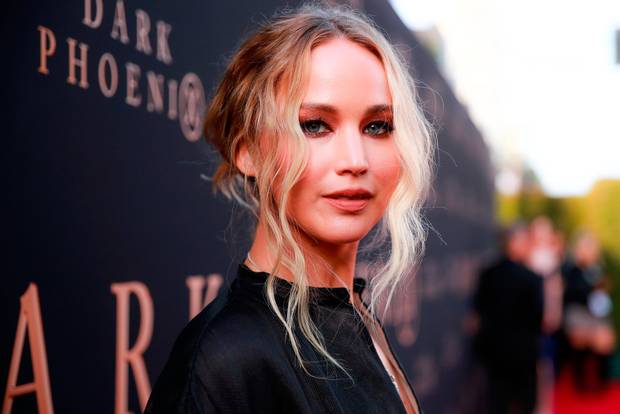 Hollywood Jennifer star, Lawrence who was named the world’s highest-paid actress in 2015 and 2016, is set to tie the knot with her fiance, Cooke Maroney this weekend.

The 29-year-old actress and 34-year-old art gallery director will be saying ‘I Do’ to each other before 150 guests on Saturday October 19 at Rhode Island. The couple who have been engaged for 8-months enlisted the help of wedding planner Mark Seed for the event which will feature a mouth-watering, gourmet menu set to tickle everyone’s tastebuds.

The main menu features wood-roasted fish with herbs and lemon-infused butter, the big dish is a 5-week-aged leg of beef with forager’s sauce. Veggies will be having heirloom roasted carrots, smoked new potatoes, whey braised cabbage.

Actress Jennifer Lawrence is getting married to Cooke Maroney this weekend

For desert, the weddng guests will be having fire-baked sourdough bread pudding with chocolate, salted caramel and fresh apple, cauldron fritters with bourbon cream and cinnamon sugar, and house-made marshmallow s’mores.

Drinks at the extravagant wedding include a specialty cocktail which appears to boil down to either a bourbon old-fashioned or gin cucumber lavender champagne.

Lawrence who appeared in Time’s 2013 100 most influential people in the world list and in the Forbes Celebrity 100 list in 2014 and 2016, has acted in movies that have grossed over $6 billion worldwide.

Keke Wyatt is pregnant with baby no. 10, her first with husband Zackariah Darring

Cheryl, 61, and Quran McCain, 24, who became TikTok sensations by sharing details about their relationship with more than 2.3 million followers on just one account (@Kingqurannewpage), have revealed they are willing to spend up to £120,000 on a surrogate to have a baby together. END_OF_DOCUMENT_TOKEN_TO_BE_REPLACED

The BBC has received six complaints against disgraced DJ Tim Westwood over alleged bullying and sexual misconduct, including a historical one that was referred to the police, despite previously insisting it was unaware of any concerns about the DJ’s behaviour. END_OF_DOCUMENT_TOKEN_TO_BE_REPLACED

Amber Heard’s legal teams filed an official motion in court on Friday that the verdict in her blockbuster case against Johnny Depp is thrown out. END_OF_DOCUMENT_TOKEN_TO_BE_REPLACED

US clergyman, Creflo Dollar, has denounced his position on tithing. For many years, Creflo had preached on the importance of Tithing and had informed his congregation that failing to tithe opens the door for devourers to come in and destroy a person’s life. END_OF_DOCUMENT_TOKEN_TO_BE_REPLACED

David Beckham and Victoria Beckham have taken to Instagram to profess their love for each other on their 23rd wedding anniversary. END_OF_DOCUMENT_TOKEN_TO_BE_REPLACED

Chris Brown has said the public is only interested in negative news about him but go silent when he drops an album. END_OF_DOCUMENT_TOKEN_TO_BE_REPLACED