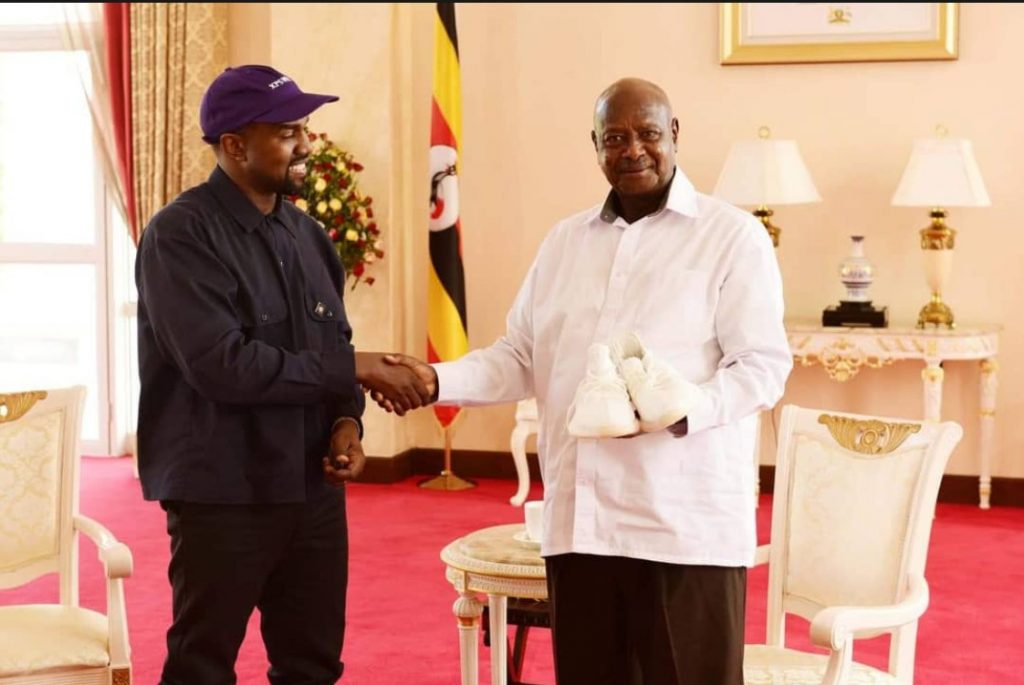 Kanye West and Kim Kardashian West meets Uganda’s President, gifts him pair of Yeezy sneakers[/caption] The West Family jetted over to Uganda this weekend for a vacation and they seem to be having a lot of fun. Kanye West and his wife, reality TV star Kim Kardashian West, have been vacationing in a national park in Uganda where Kanye  is said to be recording music in a tent!

Kanye West and Kim Kardashian took time out of their family vacation on Monday to meet with Uganda’s president and present him with a pair of Yeezys.  The famous pair visited the State House in Entebbe for a brief meeting with President Yoweri Museveni and his daughter Diana.

They discussed tourism and promoting Uganda’s arts, the president revealed on Twitter as he shared photographs of their get together and thanked Kanye for his ‘white sneakers’.

I welcome American entertainment stars Kanye West and @KimKardashian to Uganda. I held fruitful discussions with the duo on how to promote Uganda's tourism and the arts. I thank Kanye for the gift of white sneakers. Enjoy your time in Uganda. It is the true Pearl of Africa. pic.twitter.com/BO0iD0sFCP

Since then, Kanye has been seen jamming out to local music and getting his African groove on! https://www.instagram.com/p/Bo4LCsblNy1/?utm_source=ig_web_copy_link  ]]>
Related Topics:kanye westKim and Khloe KardashianKim Kardashian
Up Next

Bose Ogulu has told her son Burna Boy to “tone down the madness” as she celebrated his birthday. END_OF_DOCUMENT_TOKEN_TO_BE_REPLACED

The Hewale Lala (Song Of strength) hit maker Perez Musik gets ready to have his first-ever major concert. END_OF_DOCUMENT_TOKEN_TO_BE_REPLACED

Kofi Sonny, CEO of 610Music, a direct representative for Universal Music Group in Africa, unveiled two of his newly signed artistes to the world over the weekend. The event pulled in dignitaries from all over the globe to witness what many have dubbed “the birth of greatness.” END_OF_DOCUMENT_TOKEN_TO_BE_REPLACED

GuiltyBeatz is ringing in the summer! The Grammy-nominated Ghanaian producer and DJ is back with another dazzling solo effort – an Amapiano-infused dance anthem ‘Universe’ featuring Pop sensation, Mr Hudson and buzzing Ghanaian singer, Twitch 4EVA. END_OF_DOCUMENT_TOKEN_TO_BE_REPLACED

The host of Joy FM’s Strong and Sassy, Animwaa Anim-Addo, has tied the knot in a private ceremony. END_OF_DOCUMENT_TOKEN_TO_BE_REPLACED