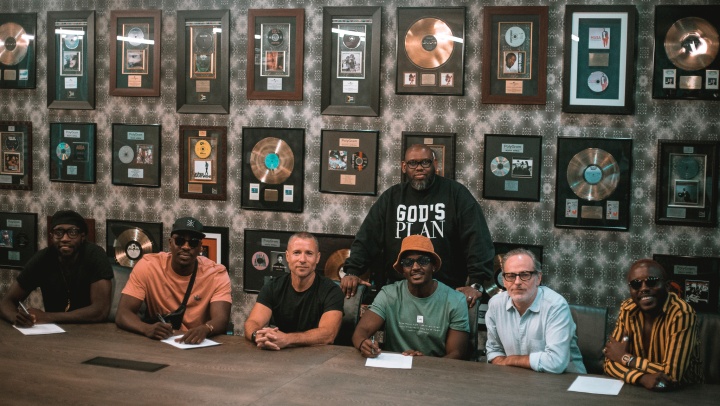 The agreement will give the band access to UMG’s global network around the world, and will allow greater opportunity for the band to reach new audiences globally, whilst continuing to satisfy and excite their dedicated fanbase with bold, creative campaigns that will engage a new generation of fans throughout Africa.

The band released their well-received debut studio album, ‘Mwanzo’ in 2008, followed by, ‘Sol Filosofia’ in 2011, which amassed multiple accolades in the form of awards and nominations. The music video for the single ‘Coming Home’ earned them the Best Music Video award at the Kisima Music Awards, as well as, the Best Fusion Artist/Group of the Year award. Their collaboration EP with South African rapper and producer, Spoek Mathambo was released in 2012. The music video for the single ‘Range Rover’ was shot at an old Dutch ammunition factory in Zaandam, Netherlands, which has since become a cultural heritage site. ‘Live and Die in Afrika’, their 2015 third studio album was released for free download for 48 hours. This early Christmas present to their fans garnered 400,000 downloads in that period alone.

Having toured successfully across Africa, the US, Europe and Australia, the chart-topping band has received the recognition and respect of both their fans and the industry, taking home international awards including, BET Awards, an MTV EMA for Best African Act and MTV AFRICA Award for Best African Group.

Last year the band opened their own record label; Sol Generation Records, with the sole mission of developing and introducing new iconic live African acts. Founded on the ethos of discipline, order, passion and endurance (DOPE), it’s pitched to attract authentic songwriters and shape shifting musicians, who will pen soundtracks to peoples’ lives.

Sipho Dlamini, MD of UMG South Africa & Sub-Saharan Africa enthused, “We are delighted to announce our partnership with Sauti Sol, one of the most innovative and creative groups to have broken through from Africa in recent years. Universal Music Africa is dedicated to helping the best African music talent reach new audiences around the world and we are excited to welcome them to our global UMG family. We look forward to working together with them to ensure they are able to authentically celebrate Africa through music and to help introduce their unique blend Afro-pop to new listeners everywhere.”

Related Topics:SAUTI SOL
Up Next

The “Lioness of Africa,” Wiyaala has been invited to join the Recording Academy’s class of 2022. END_OF_DOCUMENT_TOKEN_TO_BE_REPLACED

Burna Boy has revealed in an interview that American R & B star Toni Braxton gets 60% of the royalties of his last single ‘Last Last.’ Burna Boy made this revelation when answering questions of how the single came about while appearing on a podcast. END_OF_DOCUMENT_TOKEN_TO_BE_REPLACED

Ghana have been banned from competing in the next two editions of the FIFA U17 Women’s African Qualifiers and fined $100,000 by the Confederation of African Football. END_OF_DOCUMENT_TOKEN_TO_BE_REPLACED

Although the music industry in Ghana is heavily dominated by males, there are a few young women, pulling their weight, and rubbing shoulders with their male counterparts. END_OF_DOCUMENT_TOKEN_TO_BE_REPLACED