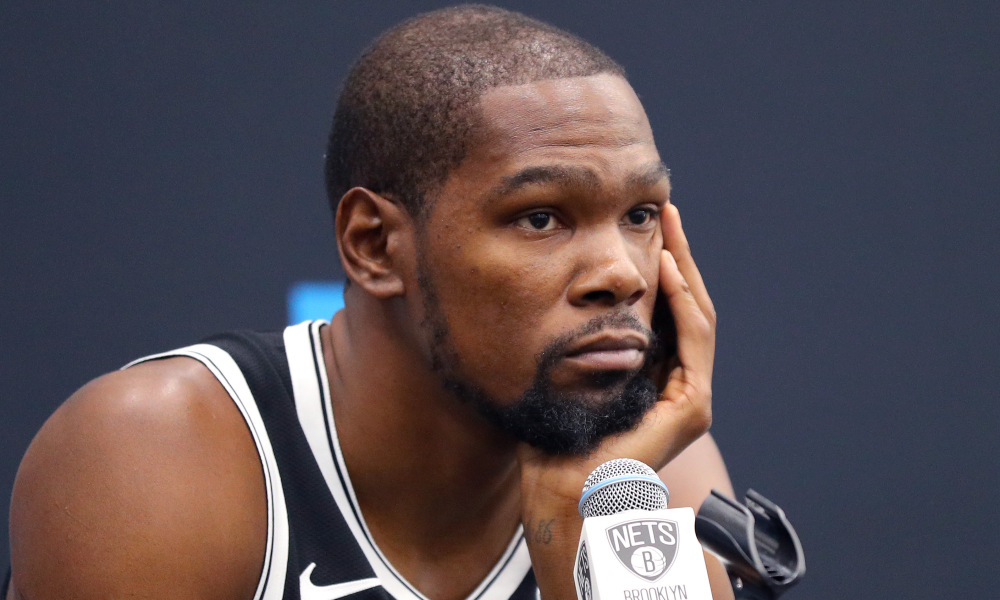 The coronavirus continues to impact the sports world. On Tuesday, Kevin Durant and three other Brooklyn Nets players tested positive for COVID-19. The names of the four players were not made public in the team release, but Kevin Durant soon spoke out about his condition with Shams Charania of The Athletic.

“Everyone be careful, take care of yourself and quarantine,” Durant said. “We’re going to get through this,”
All four Nets players, including Durant, are in quarantine. Only one of the four is experiencing symptoms. Durant has not exhibited symptoms from the virus, according to Charania. Here’s more from the Nets’ press release:
The organization is currently notifying anyone who has had known contact with the players, including recent opponents, and is working closely with state and local health authorities on reporting.

All players and members of the Nets travel party are being asked to remain isolated, closely monitor their health and maintain constant communication with team medical staff. The health of our players and staff is of the highest priority to the organization and the team is doing everything within its power to ensure that those affected receive the best care possible.

There are now seven NBA players that have tested positive for COVID-19. Rudy Gobert was the first, followed by his Utah Jazz teammate Donovan Mitchell and Detroit Pistons forward Christian Wood. Because of Gobert’s positive test and due to concerns over the global outbreak, the NBA suspended the 2019-20 season last week. The league remains hopeful of resuming operations in mid-to-late June.

Durant had not played this season due to a torn Achilles tendon, and his agent said earlier this week that his status wouldn’t change even with the possibility of the playoffs getting pushed back into late summer. “Honestly, not very realistic from my standpoint, and not even spoken about,” Kleiman said during a radio appearance.

The Nets paid a private company to conduct the tests for team members, Adrian Wojnarowski of ESPN reports. The tests were conducted on Saturday, but results were not available until Tuesday, Greg Logan of Newsday reports. The organization is now going through the process of notifying anyone who had contact with the players over the past two weeks, including other teams. Since March 3, Brooklyn has played the Boston Celtics, Memphis Grizzlies, San Antonio Spurs, Chicago Bulls and Los Angeles Lakers.

Last week, the Nets were set to play the Golden State Warriors, Durant’s former team, behind closed doors before Gobert’s positive test prompted the suspension of the season. Because of their contact with the Jazz, the Celtics players have already all been tested and cleared. It’s likely that the other teams the Nets have played will now go through a similar process.

Drake breaks record for most Billboard Hot 100 entries ever