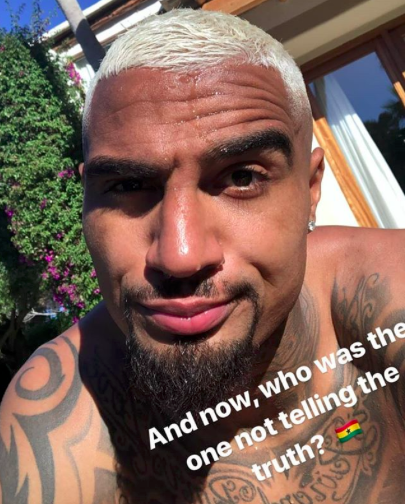 A blonde-out Kevin Prince Boateng has made a post on instagram asking “and now who was the one telling the truth” following the damning acts of corruption captured on camera in Anas Amereyaw Anas’ latest documentary ‘Number 12’. Meanwhile government has referred all officials of the Ghana Football Association (GFA) and the acting Director General of the National Sports Authority (NSA) to police for investigations. This is as the government takes steps to dissolve the GFA after the corruption exposé by investigative journalist, Anas Aremeyaw Anas. The government in a statement said the actions of the relevant officials were “potentially criminal.” The statement said mater was “forthwith referred to the Police for further investigations and appropriate action.” “The police are to take all such relevant measures as necessary to ensure that contents of the documentary are rapidly and thoroughly investigated,” it added. The extent of corruption in the Anas’ #Number12 documentary stunned even the most cynical of observers. Several high-ranking members in the GFA, including its President Kwesi, Nyantakyi, have been implicated in acts of corruption. Kwesi Nyantakyi was the first person publically implicated in alleged corruption ahead of the documentary screening. He used the name of the President, the Vice President and other senior officers of the government to collect money and lure supposed foreign investors interested in establishing businesses in Ghana. The already suspended Robert Sarfo Mensah was also seen accepting a bribe to influence player selection and give certain players more minutes at the FIFA U-17 World Cup held in India in 2017. The investigative journalist caught many Ghanaian FA officials and referees in alleged match-fixing deals. Top football administrators were also seen taking money to influence call-ups for players into the national team and more playing time. Notably, Eddie Doku, the Greater Accra Regional FA boss, was caught on tape allegedly accepting a bribe to influence game times for a player in the Black Stars Team B.]]>