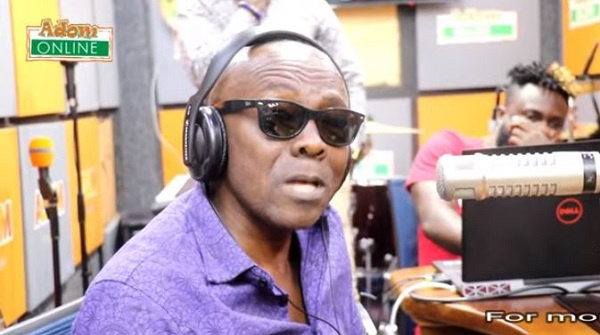 Renowned highlife musician, George Jahraa, has joined the debate on whether Ghana should legalise marijuana or not.

Many industry players such as Samini, Blakk Rasta, Kwaw Kese, John Dumelo and even Stonebwoy have advocated for the Government of Ghana to decriminalise the drug for export.

In an interview on Adom FM’s Work and Happiness show on Thursday, the ‘Driver Banza’ hitmaker said he doesn’t patronise marijuana but supports the late Ghanaian diplomat, Kofi Annan’s assertion that the government should not only look at the negative side of the hard drug but also think about the benefits that the country can derive after decriminalising it.

“I don’t think weed helps anyone perform better. I am hyper so I don’t know how I would react to drugs. My dad was a soldier so I don’t like it. I have never smoked before but Kofi Annan asked it to be decriminalized.

“I know someone who smokes but works very hard. We should listen to Kofi Annan, I think he was a knowledgeable person advocating for it so we should research on it,” he said in Twi.

What a time to be an African! On the back of a successful Global Citizen Festival in Accra, and a visit of  Recording Academy CEO, Harvey Mason Jr to Ghana, his first trip to West Africa, it appears that Afrobeats may soon get its individual shine at the Grammys! END_OF_DOCUMENT_TOKEN_TO_BE_REPLACED

The School of Graduate Studies of the University of Professional Studies (UPSA) has honoured Ghanaian musician, Rebecca Acheampong known popularly as Becca for her outstanding academic achievements. END_OF_DOCUMENT_TOKEN_TO_BE_REPLACED

Platinum selling artist, KiDi has reacted to the resurfacing of his old tweets on the social media platform. END_OF_DOCUMENT_TOKEN_TO_BE_REPLACED