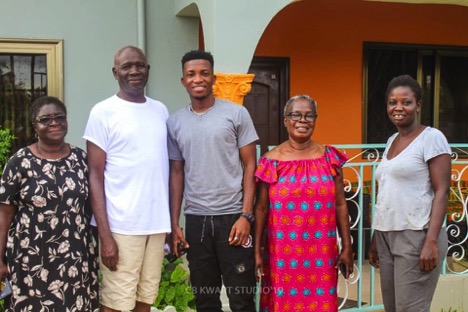 Kofi Kinaata has visited the families of the kidnapped Takoradi girls following the results of the DNA test on the human remains at the key suspect’s house in Takoradi.

The Police on Monday September 16 revealed that, the human remains found in a cesspit at the key suspect’s (Samuel Wills) house at Kansawrodo is that of the four kidnapped Takoradi girls. This was concluded after the police took samples from the families of the kidnapped girls for a DNA test.

“If you have followed the news, I have been very vocal about this case and I have granted several interviews on it. I came to Takoradi for an event and thought it wise to visit the families and show my concern, especially after the results have been released” Kofi Kinaata told the families of the kidnapped Takoradi girls.

He visited the Quayson, Koranchie and the Abekah families in their respective homes. At the Quayson family’s house, the family stated that they will not accept the results of the DNA test because they smell something fishy around the test. The Quaysons stated that they are ready to do their independent DNA test.

Kofi Kinaata with the Quayson family

At the Abekah family’s house, grandparents of Ruth Abekah, the first lady to be kidnapped also said that they are not accepting the results of the DNA test. According to them, they are very confident that their grandchild is alive and if the Police had taken their report seriously, it would have saved the other three ladies since their grandchild was the first to be kidnapped.

Kofi Kinaata with the Abekah Family

Kofi Kinaata mentioned that, he supports the stance of the various families and as a concerned resident of the Oil City, he would use all means available to him to show his ardent support.