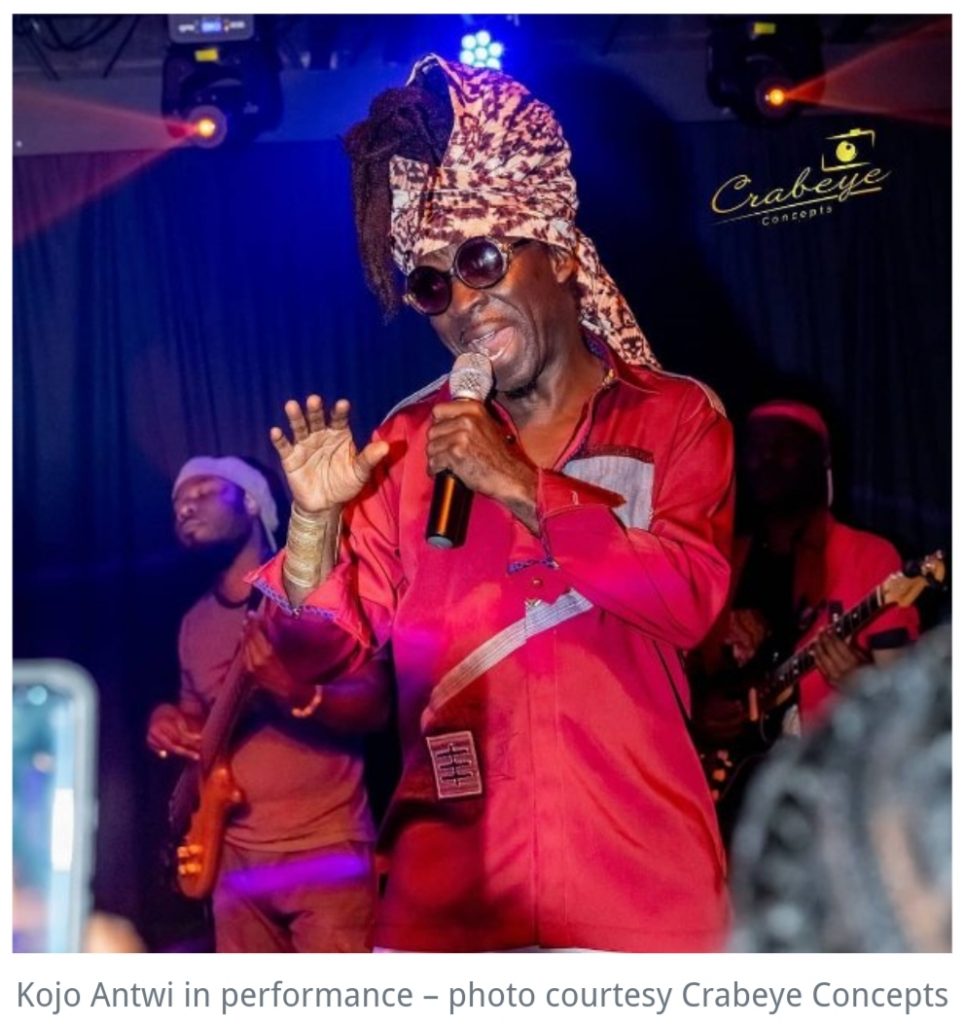 Legendary Ghanaian musician Kojo Antwi took his 2018 tour of the United States (US) dubbed ‘The Maestro US Tour‘ to Washington, District of Columbia (DC), where he set the hearts of Ghanaian fans, African music lovers, and curious Americans on fire. Kojo Antwi, also nicknamed ‘The Maestro‘, dished out hit tracks from his respective award-winning and chart-topping albums to the satisfaction of a capacity packed Karma Music Center in Washington, DC, where the partying started at 10 PM on August 11, 2018, until the wee hours of the following morning. “I was amazed by the huge number of Kojo Antwi fans here in Washington, DC. I wasn’t surprised though because Kojo is a crowd-puller as same was the case when he started ‘The Maestro Tour’ in Chicago, Illinois on July 27,” said Mawuena Agbeblewu, CEO of Brand Africa Group who are collaborating with Berks Concept on this tour.

Kojo Antwi calls on Embassies of Ghana and Benin

Mr. Agbeblewu who led Kojo Antwi and his band to pay a courtesy call on the Embassy of Ghana prior to the DC concert also disclosed to TheAfricanDream.net that their visit with the embassy was very fruitful. “We had the pleasure of meeting with Honorable Eric Boateng the Head Of Chancery at the Embassy who sat in for Ghana’s Ambassador to the US, His Excellency (HE) Dr. Barfuor Adjei-Barwuah,” said Mr. Agbeblewu. “Also present were the embassy’s Head of Consular Affairs Joseph Ngminebayihi, Mrs. Akosua Okyere-Badoo — Head of Diaspora Desk, Trade and Investment Attaché Mnister Mrs. Stella Akosua Ansah, and almost every staff in the building that day that had time, came out to interact with Kojo,” — CEO, Brand Africa Group.

“We had such a fruitful conversation and explored ways in which music and musicians could be used to chart a forward cause for the uplift of Ghana both economically and morally,” Mr. Agbeblewu told TheAfricanDream.net who are official media partners of the tour. The CEO continued to reveal that they also called on His Excellency Hector Posset, Benin’s Ambassador to the US, where Kojo and his entire band connected with the Ambassador.

“Benin is a very important place for me because it was where I went to record my first album in the 80’s,” said Kojo who believed it was only natural that he paid homage to the embassy. On his part, Ambassador Posset said Kojo Antwi’s music played an important role for him while he served as a diplomat of his country in Ghana, “I am so honored to meet you in person finally,” the Ambassador said.

How the Maestro conducted his fans at DC concert

Almost 8yrs, that’s how long Kojo Antwi fans had waited to finally catch him in a performance in the Washington, DC, area. So yes they did come in their numbers to the Karma Music Center. But before Kojo made his grand entry, the crowd were warmed up by some DC-based performers who treated them to great Afropop songs and spoken word performances. Among the opening acts were Akoeba, A Crown, Dede, Izzy Zick, Fatim and Rison. The rest were Disastrous, Jamin, Nee Oseye, and SK Originale. Akua Frimpomaa who is Kojo’s road manager was also on stage as a backup singer. Then one by one, at the defining moment, Kojo’s instrumentalists mounted the stage. They were drummer Francis Osei, keyboardist Edmond Mireku, and bass guitarist Emmanuel Affram. The energy by this time tripled as Augustina Serwaa Frimpong aka Black Magicque, also a backup singer and dancer, joined her colleagues to announce the presence of Kojo, who mounted the stage to a rousing welcome and applause! From there on it was history in the making as the Maestro did his magic and had the audience join him sing to some of his songs like ‘Pour some sugar‘, ‘Shining Star‘, ‘Rocklyn‘, ‘Hini me‘, ‘Odo mmaa y3 aa‘, ‘Wappi‘, ‘Afafranto‘, ‘Medo nsoroma‘, ‘Ade3p3na‘ and ‘Bra‘ among others. Yes, he did perform ‘Mr. musicman‘ too, it was the track that ended the over 4hr energy-filled performance.

Team-Kojo at the Voice of America, and next tour venues

The following day after the concert Kojo and his band were at the Voice Of America (VOA) headquarters and studios in Washington DC where he was interviewed for radio and TV by VOA reporters like David Vandy, Peter Clottey and Jackson M’vunganyi. Kojo and his team went on to meet Sonya Laurence Green, Chief of VOA English to Africa Service. Dr. Shaka Ssali, VOA senior editor, and host of the network’s popular ‘Straight Talk Africa‘ programme applauded Kojo for his work and invited him and his band to a future interview. During one of his VOA interviews, Kojo disclosed that he was working hard at the establishment of a musical incubator in Ghana to be used by musicians all over.

“This is my small way of giving back to help sustain the quality of Ghanaian and African music and to also teach the young up and coming musicians the right way to do music as well as instill in them a sense of patriotism. We also want to use the incubator to help the old and veteran stars to prepare to bow out in a decent and honorable way with their legacy intact,” Kojo Antwi explained.

‘The Maestro US Tour‘ heads next to the ‘Big Apple‘ at the New Life Academy Auditorium in Mount Vernon, New York, come August 17th at 8 PM. The Next concert will be at Norcross in Georgia on August 25th at 8 PM then next month on September 1 at 5 PM, the tour heads to 34 Boynton Street in Worcester, Massachusetts. The train screeches into Dallas, Texas, the following day on September 2nd. Follow the tour’s progress on social media with the hashtag #KojoAntwiTour2K18 and interact with fans online to update yourself with photos, videos, and news. Also, visit KojoAntwi.net to find out all about Mr. Musicman and his upcoming 14th studio album scheduled for release this 2018. Written by Oral Ofori of TheAfricanDream.net
]]>
Related Topics:kojo antwi
Up Next

Ghanaian Reggae and Dancehall artist, Stonebwoy has been captured in a studio with American singer, Jordin Sparks following their recent meeting in Los Angeles. END_OF_DOCUMENT_TOKEN_TO_BE_REPLACED

A Lagos State High Court, Southwest Nigeria has awarded N5m damages against a singer, Ikuforijimi Abdulrahman, aka Oxlade, over a leaked explicit sex tape with a woman on a social media app, Snapchat. END_OF_DOCUMENT_TOKEN_TO_BE_REPLACED

Ghanaian rapper, Kwaw Kese has recounted his contribution to the success of Stonebwoy’s career. END_OF_DOCUMENT_TOKEN_TO_BE_REPLACED

Ghanaian Afropop and R&b singer, Camidoh has stated that he dropped an EP instead of an album to further solidify his brand some more. END_OF_DOCUMENT_TOKEN_TO_BE_REPLACED

Ghanaian Radio/Television Personality, Deloris Frimpong Manso, popularly known as Delay, has revealed that she has been blocked on Twitter by her colleague Abeiku Santaana. END_OF_DOCUMENT_TOKEN_TO_BE_REPLACED