Members of Ghanaian music collective,  La Même Geng has responded to claims that the group is no longer together.

LA MÊME GANG is an urban collective of individual Artists who have come together
for the greater good of music and culture.

Made up of Ahmed Froko (Nxwrth), Elvis E. Amenyah (Spacely), Paul N. A. A.
Darko (Darkovibes), Dennis Dorcoo (Kiddblack), Micheal K. Boateng (kwakuBS) and
Joshua E. Mensah (RJZ), the group has not promoted together since 2020.
This was after one member, Kwaku BS quit the group after allegations of rape were levelled against him and two other members of the group on social media.
Yesterday, Joey B to twitter to express that he missed La Même and hurt the group split up.
Reacting to his tweet, Darko Vibes and RJZ denied that the group disbanded. 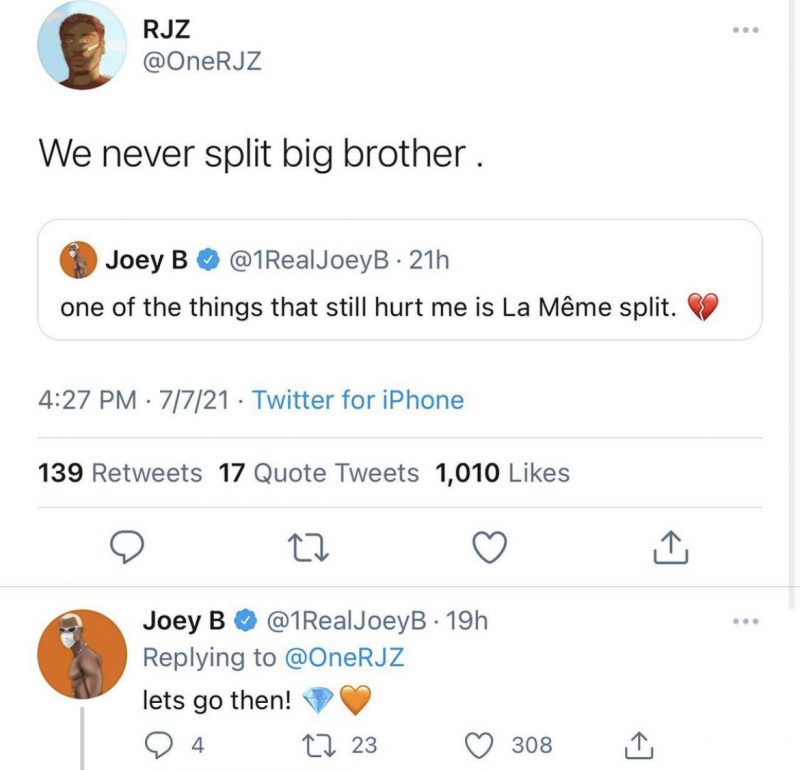 Darko Vibes also stated that “the team is straightening” and will be back better.

Award-winning rapper, Sarkodie has responded to all the criticism he has faced ever since his feature on Bob Marley & The Wailer’s classic, “Stir It Up” was released. END_OF_DOCUMENT_TOKEN_TO_BE_REPLACED

Ghanaian singer, Efya has caused quite a stir on social media after revealing that she doesn’t know who popular Reggae artiste and Radio Host, Blakk Rasta is. END_OF_DOCUMENT_TOKEN_TO_BE_REPLACED

Ghanaian singer, Efya has reacted to Blakk Rasta’s comments about Sarkodie’s feature on the Bob Marley & The Wailer’s classic, “Stir It Up.” END_OF_DOCUMENT_TOKEN_TO_BE_REPLACED

Award winning Ghana musician who doubles as a physician specialist has stated in a recent interview on Asaase Radio that, the division of fans is rather killing the Ghanaian music industry than helping in building it. END_OF_DOCUMENT_TOKEN_TO_BE_REPLACED

American rapper, Tobechukwu Dubem, better known as Tobe Nwigwe has expressed his admiration for some Ghanaian musicians with whom he would like to collaborate. END_OF_DOCUMENT_TOKEN_TO_BE_REPLACED

Ghanaian Reggae and Dancehall artist, Stonebwoy has revisited the clash he had with Shatta Wale at the 2019 Vodafone Ghana Music Awards. END_OF_DOCUMENT_TOKEN_TO_BE_REPLACED