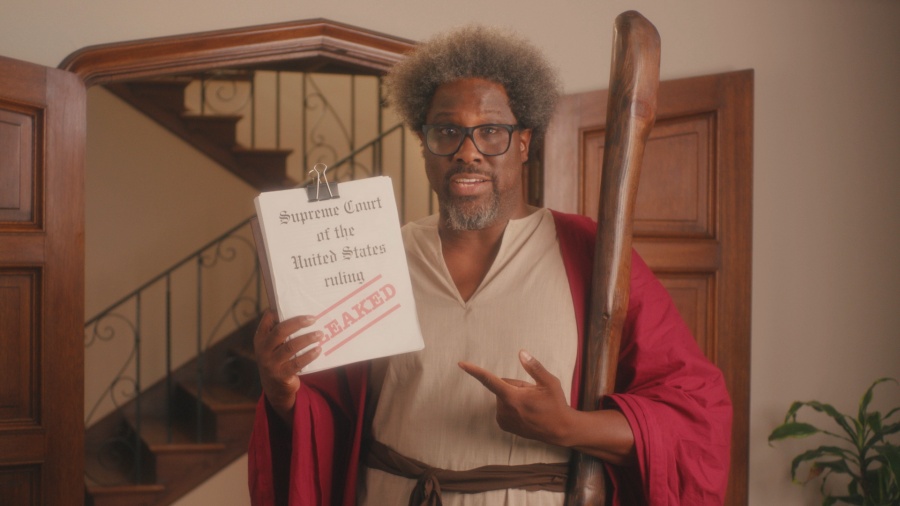 As America girds itself for the Supreme Court’s overturn of Roe v. Wade, one group of Americans had been all too silent: men who support abortion.  And specifically dads.
Emmy-winning comedian W. Kamau Bell and abortion rights advocates Abortion Access Front are teaming up to change that narrative with a provocative new video campaign called “Dads For Choice”, launching this week just in time for Father’s Day.

The two-minute spot opens with soft-focus, Hallmark-style footage of cute kids giving their dad presents, as Kamau steps into the idyllic tableau: “This Father’s Day, give dad what he really needs. Not a home brewing kit. Not socks. Give him safe and legal access to abortion.”

“Throughout history, dads have enjoyed our position on the sidelines cheering on the action, but we can’t afford to do that at this critical time,” says Bell. “Abortion and bodily autonomy are human rights. And I’m here to welcome dads – and everybody else on the sidelines – into the fight.”

Created by the comedic rabblerousers Offsides Productions, “Dads for Choice” was co-produced by The Daily Show co-creator Lizz Winstead, and serves as a hilarious call to action to join Operation Save Abortion the latest project from Winstead’s non-profit organization Abortion Access Front which launches July, 17th.
“Everybody benefits from unfettered access to abortion,” says Winstead, “so everybody needs to commit to preserving it. If forced parenting sounds awful to you, guess what? It’s time to step the fuck up in words, deeds, and in every election.” A quick, informative, and effective way to do that is to sign up at OperationSaveAbortion.com, a program that educates and onboards new activists into areas of abortion activism that align with their abilities, interests, and capacity.
“Dads for Choice” was written by Adam Mansbach (#1 New York Times bestselling author of Go the F*ck to Sleep). He also co-stars in the video with his partner and three daughters.
“It’s a family affair,” Mansbach says. “My daughters’ generation has enough shit to deal with without a bunch of hypocritical religious fanatics telling them what they can and can’t do with their bodies.”

“When the leaked Supreme Court opinion came out, I saw every woman I knew posting about it and hitting the streets. But where were us men?” asks Josh Healey, Offsides Productions executive producer. “It’s our time to step up and join the movement. Less awful Dad jokes, more actual Dads for justice.”

“Comedy engages people in ways bombast can’t,” adds director Jacob Kornbluth, an Emmy winner for Showtime’s Years of Living Dangerously. “We want to mobilize as many people as we can in a fun and inviting way, and also frame these unprecedented stakes in no uncertain terms.”
“Dads for Choice” marks the third video collaboration between Offsides, Bell, and Mansbach. The previous two, “What To My People Is the 4th of July” (starring Daveed Diggs) and “912, What’s Your White Emergency” (starring Bell, Sarah Silverman, Craig Robinson, Lewis Black and Sarah Cooper) have each been viewed over 10 million times.
ABOUT THE TEAM:

W. Kamau Bell is a stand-up comedian and the director and executive producer of the four-part Showtime documentary, We Need To Talk About Cosby, which premiered at Sundance. He also hosts and executive-produces the Emmy Award winning CNN docu-series United Shades of America. His most recent stand-up comedy special, Private School Negro, is available on Netflix.
Lizz Winstead is co-creator and former head writer of The Daily Show, and co-founder of Air America Radio, comedian Lizz Winstead helped change the very landscape of how people get their news. Winstead is not only a writer and creator, she was also a correspondent on The Daily Show and co-hosted Unfiltered, Air America Radio’s mid-morning show, with Chuck D and Rachel Maddow. Known as one of the top political satirists in America, Winstead is recognized by all the major media outlets including The New York Times, The Washington Post, O Magazine, and as Entertainment Weekly’s 100 Most Creative People. Winstead’s first book, Lizz Free Or Die: Essays, released in 2012, garnered incredible reviews.  Ms. Magazine says, “Lizz Winstead is a sharp-witted truth-teller, and Lizz Free or Die will inspire anyone who has ever talked back to the television or wished they could come up with satire as insightful as The Daily Show.” Lizz continues to do stand-up, yet spends most of her time helming Abortion Access Front, an inclusive NYC- based reproductive rights organization she founded in 2015. AAF uses humor and outrage to expose anti-choice hypocrisy and mobilizes people to take action in all 50 states. Creating Abortion Access Front was the natural next iteration of her Daily Show sensibilities and she and the organization are taking it one step further by producing and co-hosting Feminist Buzzkills Live! FBK Live! brings all of her passions together- Slaying bad guys with humor, making people smarter, and talking with folks the world needs to know. To keep up with Lizz, follow her on Twitter and Insta @lizzwinstead or like her on Facebook www.facebook.com/lizzwinstead

Adam Mansbach is the #1 New York Times bestselling author of the Go the F*ck to Sleep series, the California Book Award-winning novel The End of the Jews, and the screenplay for the Netflix Original film Barry. He’s won multiple Reed and Gold Pollie awards as a writer and director of political ads. His most recent book  is I Had A Brother Once, a memoir in verse.

Josh Healey is an award-winning writer, filmmaker, and co-executive producer of Offsides Productions. A regular performer on NPR’s Snap Judgment, Healey wrote and produced The North Pole digital series featuring Rosario Dawson and Boots Riley. .
Jacob Kornbluth is the award-winning director of documentaries Inequality for All, and Saving Capitalism, and feature films Haiku Tunnel, Love & Taxes, and The Best Thief in the World. He was a producer on the TV show Years of Living Dangerously. His work on that show won a primetime Emmy. Jacob has had 3 films premiere at the Sundance Film Festival.
Offsides Productions creates bold, cinematic content that is politically urgent, entertaining, and sparks the radical imagination for social change. Founded in 2020, their recent projects with Daveed Diggs, Sarah Silverman, and Diane Guerrero have attracted over 25 million viewers and amplified progressive grassroots movements across the country.
Operation Save Abortion is a program that educates and onboards new activists into areas of abortion activism that align with their abilities, interests, and capacity. The program launches July 17th, with a virtual training day made up of interactive conversations and activities led by abortion activists and experts from around the country, gathered in NYC for in-person sessions that will be live-streamed into activist house parties across the country. The kick-off day is designed as an orientation into many of the ways people can participate in the fight to protect abortion access.
The experts gathered specialize in areas of abortion provision, direct clinic support, abortion funding, legislative and policy work, direct action, and much more. They will discuss what new people to the movement need to know about each of these areas and how they can get involved locally. Going beyond July 17th,  Abortion Access Front will help connect participants to ongoing activities and actions locally and nationally, to help people stay engaged. Details and sign up at OperationSaveAbortion.com.
Related Topics:
Up Next

American rapper, Fish Scales is fortunate to be alive after he was shot, robbed and kidnapped outside an Atlanta brewery he co-owns. END_OF_DOCUMENT_TOKEN_TO_BE_REPLACED

19-year-old Florida rapper Smokingskul has just shared his new single and video “Nina”. Smokingskul is at the helm of a new era of plugg music known as “dark plugg”which substitutes the ethereal sounds of “plugg” with more tonal melodies that are accentuated by distorted percussion, producing a grimey, DIY sound. END_OF_DOCUMENT_TOKEN_TO_BE_REPLACED

Drake officially has more slaps than The Beatles. END_OF_DOCUMENT_TOKEN_TO_BE_REPLACED

Swizz Beatz and Timbaland have filed a lawsuit against Triller, claiming the company still owes them $28 million for the sale of their Verzuz series. END_OF_DOCUMENT_TOKEN_TO_BE_REPLACED