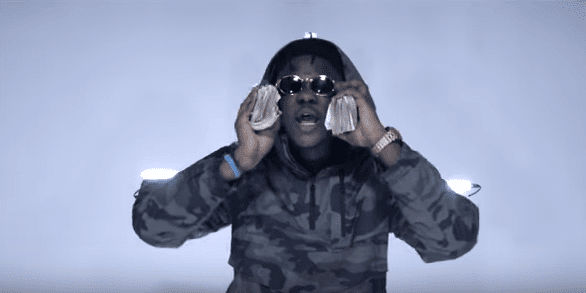 Medikal shares money and food on the streets of Nima[/caption] Medikal seems to be in good and charitable mood as the “How Much” hit-maker has been captured spraying money and sharing food to some people in the Nima community. https://ameyawdebrah.com/zynnell-zuh-joselyn-dumas-and-medikal-win-big-at-iara/

In the video, the music artiste is seen siting on the top of a car with legs in the sunroof holding bundles of Ghana cedis and throwing them into the air as people rushed and gathered around the car to get their share. In another video shared on his Instagram story, the “Too Risky” rapper can be seen sharing food from the booth of his car.
[video width="720" height="900" mp4="https://adm.nyc3.digitaloceanspaces.com/2018/10/Medikal.mp4"][/video]
It’s still unclear what the reason for his kind gesture since it’s not his birthday but for the people lucky to be present at Nima, it was a happy day!
]]>
Related Topics:AMG Medikalghana musicMediKal
Up Next

KOFAS is not my sponsor, I work hard for my money – Actress Salma Mumin

Comic & satirical artiste, Wicked Queen J has intensified her beef with comic actor, DKB with a reply to his jabs following the release of her controversial ‘Ayew’ single. END_OF_DOCUMENT_TOKEN_TO_BE_REPLACED

Fast rising music star from Ghana: King Enam has never stopped being consistent with his craft since day one of his inception onto the music scene in Ghana.
END_OF_DOCUMENT_TOKEN_TO_BE_REPLACED

The First Vice President of the Nigeria Bar Association, John Aikpokpo-Martins, has dismissed reports making rounds that Beauty Turkura, a disqualified housemate of the Big Brother reality show, season 7, is a lawyer. END_OF_DOCUMENT_TOKEN_TO_BE_REPLACED