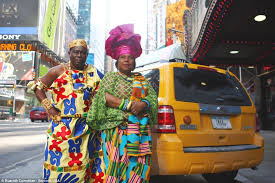 A chief of Akwamu in the Eastern region who lives abroad, Nana Gyensare Osei V is a taxi driver in America.

In a short documentary by Barcroft.tv on the powerful life story of the chief, his double life of managing a throne and his taxi started after his brother died.

According to the chief, who is known in his locality in America as Isaac Osei, his brother was the chief at Akwamu who died in 2006, causing him to become the new chief.

Before then, Mr Osei, who is one of 19 children, had moved to New York in 1977 to make a better living for himself. He began driving a taxi and soon bought a medallion in 1982.

Things did not go on well in the search for greener pastures as the hardworking man ended up in many financial entanglements. At that low point in his life, Mr Osei, underwent a divorce as well.

Life started to come together for Nana Gyensare V when he found another woman named Elizabeth Otolizz and they got married.

Elizabeth saved Osei from all his financial troubles through hard work and diligence. Reports indicate that the two met at a small restaurant that Mr Osei had tried to put together just before 1990.

At the time the lovers met, she worked as a home health nurse, a newspaper delivery woman and a taxi driver all at the same time.

Together, the husband and wife started doing taxis. Through hard work and diligence, Elizabeth Otolizz and her husband turned their taxi driving business into a company in Manhattan, New York City, that is now growing into an empire.

The two call the firm Napasei Taxi Management Corporation and reports indicate that Elizabeth Otolizz runs it as the president while Nana Gyensare V himself serves as the vice president.

Speaking about how it is to run both the taxi business and settle family and property disputes back in Ghana, the chief indicated that he had to travel back and forth every time.

Nana Gyensare V added that though he gets worshipped as a king back in Ghana, he is treated like a normal ‘nobody’ when he is in America.

“When I’m here in New York, it’s a different thing. No one knows me,” Nana said.

Related Topics:new york
Up Next

The Association of Tennis Professionals, popularly known as ATP is a professional tennis tournament. The ATP world tour is a worldwide event for men. There are only four major Grand Slams: the Australian Open, Roland Garros, Wimbledon, and US Open. ATP happens to fall in the minor category with Monte Carlo, ITF and Davis Cup. END_OF_DOCUMENT_TOKEN_TO_BE_REPLACED

1xBet promo code for new customers: 1xVip200. 1xBet Official Website gives you a 200% sign-up bonus on your first deposit. All you need to do is specify the promo code during registration, which will activate all the bonus offers at 1xBet. END_OF_DOCUMENT_TOKEN_TO_BE_REPLACED

Do you like cryptocurrencies? If you do, don’t forget to take a look at BitiCodes IO. END_OF_DOCUMENT_TOKEN_TO_BE_REPLACED