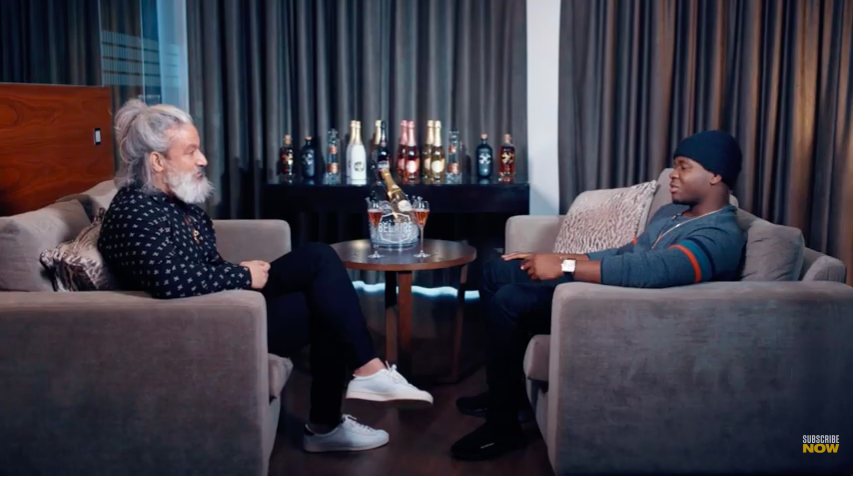 Actor, rapper and comedian Michael Dapaah has just released news of #SWIL2, the second season of his popular mockumentary Somewhere In London.

Get to know the man behind the fictional characters Big Shaq, Dr Ofori and MC Quakes in this exclusive interview with Luc Belaire CEO Brett Berish as part of the French wine brand’s series Self Made Tastes Better. The campaign highlights the stories of self-made musicians, actors and personalities with in-depth interviews.

Michael is the son of first generation Ghanaian migrants who wanted him to be a doctor
“being born here, then going to Ghana when I was a kid, staying in Ghana for five years, going to South Africa for three years, growing up here – council estate boy” 3.00 “He wanted me to be a doctor. Because he is actually a doctor, so naturally as a man, you want to follow in your father’s footsteps. But I realised very on – I don’t like blood”.

Michael asked himself serious questions to figure out who he is and what he wants
Who am I? Who is Michael? What the heck do I actually believe in? We grew up on going to church. Coming from an African background, but is it your faith or is it your parents’ faith?…Are you believing for yourself or is it for your folks?

The film Kidulthood inspired him to write his own script
“I wrote a film… There was a film out called Kidulthood on TV that was circulating by a guy called Noel Clarke over here. And I think I saw that…We were doing this acting, writing, comedy, music. We were making beats, rapping, all of that. And so for me, I found entertainment – that’s where I felt most expressive…I saw the film and I thought, I can do that man. I wrote a 90 page script”.

It took time for Michael’s dad to recognise his success, but when he did he got in on the action!
10.56 “The surname Dapaah is very unique. And so people sarted saying, “Oh yo, is this your son?”…It’s when it started happening a lot more and you know, people started wanting to take pictures of him, because he’s my dad”.

Writing was the foundation of his success, but he had to make moves to make things happen
“I just used to write loads of content. I was writing for months, just trying to figure it out. I wasn’t sure if I was just going to jump at this. It’s mad because you’ve got this idea but then, you’re trying to work it all out on paper, step by step by step by step. Then I realised, yo cool, I actually can’t figure out everything on paper. I have to actually start moving”.

Michael strategised the creation of #SWIL
“I just started putting out loads of content, videos….” 19.54 “It was all on my vision board. Nothing that happened was by accident. Everything was vision, prayers, execution…I didn’t want to do things that everyone else was doing. I kinda scoped the market and I was just like “Yo, this is what’s going on over here – I don’t wanna do that, I wanna do this, I wanna bring this to the market”, and yeah naturally the people started gravitating towards it”.

THE WAIT IS OVER! #SWIL2 is here! The boys are back for a brand new series! Coming This July! ⠀⠀⠀⠀⠀⠀ What date do u want this? 🤔 Let me know in the comments ✍🏽 #SWIL2 #SomeWhereInLondon2 #SWIL #YourDadWearsSpandex #TeamDapaah !

He has been working on #SWIL2 and new music
“SWIL2 second season…Yeah I didn’t want to put it on TV. I just really wanted to give it to the people, you know how the people have received it. Make it accessible worldwide. I didn’t want to limit the reach, especially. And so yeah, working with the same team of people to produce that…My supporters have been waiting for it, so gotta give it to them…There’s new music, there’s new everything”!

Continue Reading
Advertisement
You may also like...
Related Topics:Michael Dapaah

Nominations announced for 2019 Ghana Event Awards
This is how Mustapha Diyaol Haqq, a 19-year-old from Kumasi is proving that Africa’s future lies in its talented youth
Advertisement
Advertisement